When Chad Michael Murray joined the cast of Riverdale last season, I was ecstatic. For starters, one show can never have enough hot people, and watching Chad play the cult leader that is Edgar Evernever did things to me I didn’t expect.

Then, when he and the rest of the Farm ascended at the end of last season, I worried it’d be the end of seeing his fine ass on my screen. But no! The Riverdale creators have decided to bless us once again, and he’s back for season 4.

There’s something we all need to discuss though, and it is this alarming conspiracy theory I came up with a few minutes ago. I personally think Chad’s Riverdale abs are not real.

Look, I’m not here to deny that Chad is hot. He is! So hot! But this picture has me suspicious. I present to you Exhibit A: A close-up screenshot of the abs in question. 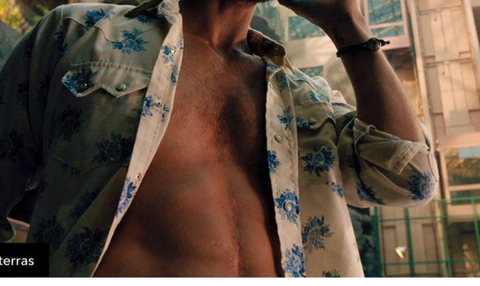 That looks like a LOT of shading to me, and potentially some makeup. Sure, it could be the filter or the lighting or whatever, but it could also be that these abs are DRAWN ON. Or, worse, they’re actually plastic and they’ve been GLUED on. The horror.

Before you get all up in arms, I do realize that Chad did rock some pretty great abs last season. No, I’m not blind!

On this week’s all-new #Riverdale, a big reveal about @chadmichaelmurray Edgar Evernever. And I do mean a BIG reveal. And those last 10 minutes… 🔑🔓☠️👀 ⬆️ The boss mans words ⬆️ @writerras Big reveals all around! This Wednesday on @thecwriverdale CANT MISS EP.

However, that doesn’t take away the fact that there’s something fishy about these new ones. They’re too round?? They look too much like loaves of bread? Idk. I can’t put my finger on it exactly but…it’s something.

I’m just saying it’s possible Edgar harvested some abdominal muscles instead of organs, and he put them on himself. Now THAT would be a plot twist I’d watch.