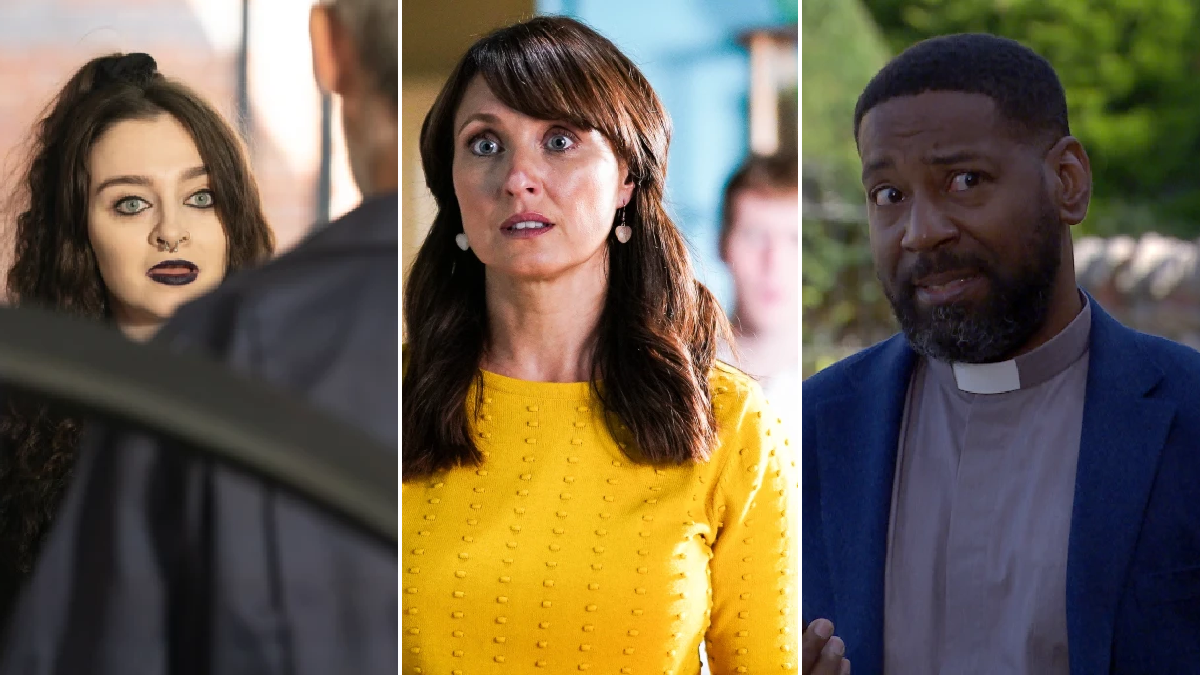 Several of soap’s finest are on a mission in the week ahead, as some set out for justice, while others issue dark threats in order to get what they want.

Nina Lucas is hellbent on bringing down Corey Brent in Coronation Street and after her plans backfire, she vows to kill him!

Meanwhile, EastEnders’ Honey Mitchell is left in tears after Suki Panesar slaps her and threatens her, while Emmerdale’s Charles Anderson is contacted by a mystery person.

But who could it be?

Over in Hollyoaks, Luke Morgan is public enemy number one after he tried to kiss Ollie’s girlfriend Evie, and he ends up getting on the wrong side of Becky Quentin as well!

It’s set to be quite a week in soapland, and here’s 10 of the biggest moments to come.

Nina discovers Corey has been named in the opening line-up for County. She vows to name and shame him, and therefore she takes to social media, branding him a murderer, but she later regrets her actions, as he plays the victim. Kevin, meanwhile, shows her Corey’s post-match conference, and she declares she wants to kill him! Nina is given opportunity when she sees Corey in Seb’s memorial garden while out for a drive. Will she take action?

Honey tells Jay she can’t go to Miami with Janet, but Jay suspects that Suki is to blame. She finally admits the truth about the kiss, and Jay spills the beans to Kheerat, who holds him up against a wall! Suki later pays Honey a visit. Honey explains that she’s got nothing to be ashamed of, but Suki retaliates by slapping her across the face, before threatening her!

David suffers a terrifying flashback of the siege, but Victoria helps him, and they share a tender moment, which is spoiled by Meena’s unannounced return. Meena bans Victoria from seeing David, and decides to take charge of his medication. He’s been prescribed super strong painkillers to ease the discomfort of his injury. Meena replaces them with paracetamol, and does her best to trigger his anxiety. The killer smiles, pleased to have him where she wants him.

One to watch: Tuesday October 5 at 7pm on ITV.

Luke puts his foot in it with Becky when she interviews for a job. As a result, Becky leaves a bad review. Zara apologises to Becky on Luke’s behalf and explains his condition, but will Becky listen?

Kevin is concerned for Abi, realising that no-one has heard from her in weeks. He leaves a new voicemail message, pleading with her to get in touch, and afterwards, he reports her missing. However, he’s soon notified of a cash withdrawal from their joint account, and thus visits The Dog and Gun with a photo of Abi, hoping to find her. He encounters Seb’s dad Tez at the bar, but Tez claims he hasn’t seem Abi. Will Kevin believe him?

Rocky scores Sonia a VIP invite to Dotty’s noughties night at the club, but things take a turn when a drunk woman turns up, and asks after Kirsty. The penny drops for Sonia, who introduces this woman – named Sandy – to Dotty. It’s her mum!

Charles is shaken when he receives a mysterious message on his phone. He rejects a phone call, and Harriet later catches sight of a disturbing text. Charles, however, has no intention in confiding in her about the harassing texts. He decides to make a call, telling his tormentor to stop hounding him, and later he has a meeting in the woods. But who is this mystery person?

One to watch: Thursday October 7 at 7pm on ITV.

Zara is on a mission in Hollyoaks

Zara helps Ripley save their business by chanting through megaphones about the lack in sustainability of Nate’s clothes. Later, Zara bumps into Grace!

James urges PC Brody to do better in Coronation Street

James receives an apology letter from the police, upholding his complaint. PC Brody calls at No. 8 to apologise, but insists he’s not a racist. James explains that he made a judgment call based on appearance, and urges him to do better.

Martin wants his stall back, but Peter tells him it’s the chippy or nothing at all. He accepts, and Sharon later offers him some words of wisdom, telling him that he’s doing what he has to in order to support his family. Martin, however, struggles to get along with Peter, and complains about him to Zack. Zack grabs Peter’s tablet, and later, Peter finds it battered at the chippy!