Craig Tinker (played by Colson Smith) is dicing with death after snooping on Ray Crosby’s (Mark Frost) development plans, but it seems it won’t be him who is left fighting for his life, but Faye Windass (Ellie Leach) instead. It comes after the actor who plays Coronation Street’s local police officer spoke about his upcoming storyline with the business developer and how Faye is his “weak spot”.

Viewers will see Ray catch Craig in his office looking at the changes he plans to make to the Weatherfield community.

The businessman wastes no time in trying to blackmail Craig with his job and romance with Faye.

And Craig does agree to keep quiet.

But it seems Faye will be the one who will end up experiencing Ray’s wrath. 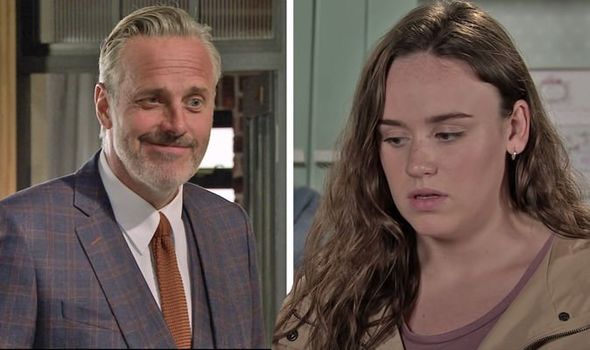 Prior to this week’s scenes, Colson said his character is “not Ray’s biggest fan”.

“Craig is very protective of Faye and they are now in a relationship which is like, the best thing ever for him! His protective instinct makes him wary of Ray because he knows that Ray is a bit dodgy but he can’t quite put his finger on what it is about him,” he added.

As for what Craig first thinks when he sees the blueprints in Ray’s office, he realises he is in “an uncomfortable situation” and it actually takes him “a bit of time to process what the secret it”.

“Ray takes Craig to one side and tells him that they need to talk about what he has just seen,” the actor added. 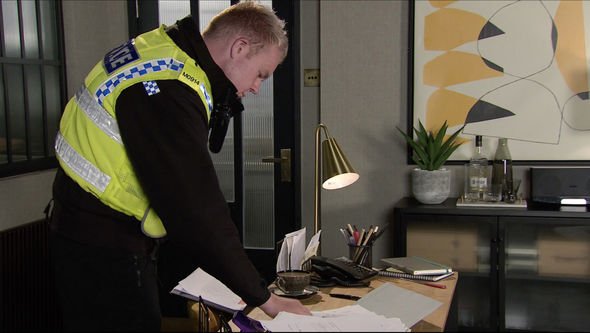 “When Ray tries to play it down to Craig, Craig gets suspicious and starts to realise that what he has seen is more than just a plan, it is something that Ray is going to put into action.”

Apparently, Ray has underestimated Craig if he thinks he is able to buy the police officer’s silence.

“Ray sees Craig as some young copper who is not very good at his job – he refers to him as Officer Dibble which Craig actually takes as a compliment because he hasn’t got a clue!” Colson continued.

“But for all of Craig’s naivety, he knows right from wrong and he has a strong suspicion that what Ray is trying to do is wrong. The more that Ray tries to butter him up, the more he realises that something is going on.” 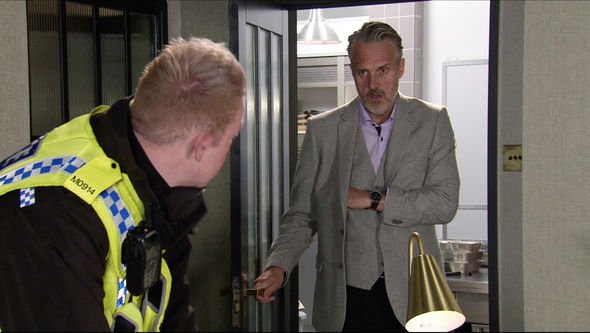 But perhaps Craig is naive because he “doesn’t quite know what Ray is capable of and the extent of the damage that he can do”.

Viewers will see the penny drop for the local bobby when “Ray says that he will have a word with the Chief Inspector” and this leaves Craig “feeling out of his depth”.

“Ray makes it clear to Craig that there is only one person that is going to win this and it’s Ray so Craig is now in the middle of something that he does not want to be involved in and it is a really sticky position for Craig because his girlfriend, Faye, is employed by Ray and he has just offered her a promotion,” Colson explained.

“Craig still wants to keep Faye happy but he also wants to do his job the best he can. This is where it starts to become a challenge and Craig has to decide whether he protects his girlfriend and her job or whether he acts on his hunch.”

The reason why Craig is so torn over what to do, is because “Faye is his weak spot” and that “affects the way he thinks and how he makes decisions”.

“He doesn’t want to ruin Faye’s career after she has just got a new promotion,” the Coronation Street actor said.

“Craig and Ray are constantly trying to score points off each other and when Ray offers Faye that job, it means Ray wins Faye over Craig.

“Craig rarely thinks about himself and he puts himself in the line of danger quite regularly – the person he is worried for is Faye,” he remarked.

Is this a teaser for how the storyline is going to end?

With Craig determined to bring Ray down and do right by his job and the law, it seems Faye could find herself Ray’s very first death victim.

Coronation Street airs Monday, Wednesday and Friday at 7.30pm and 8.30pm on ITV.