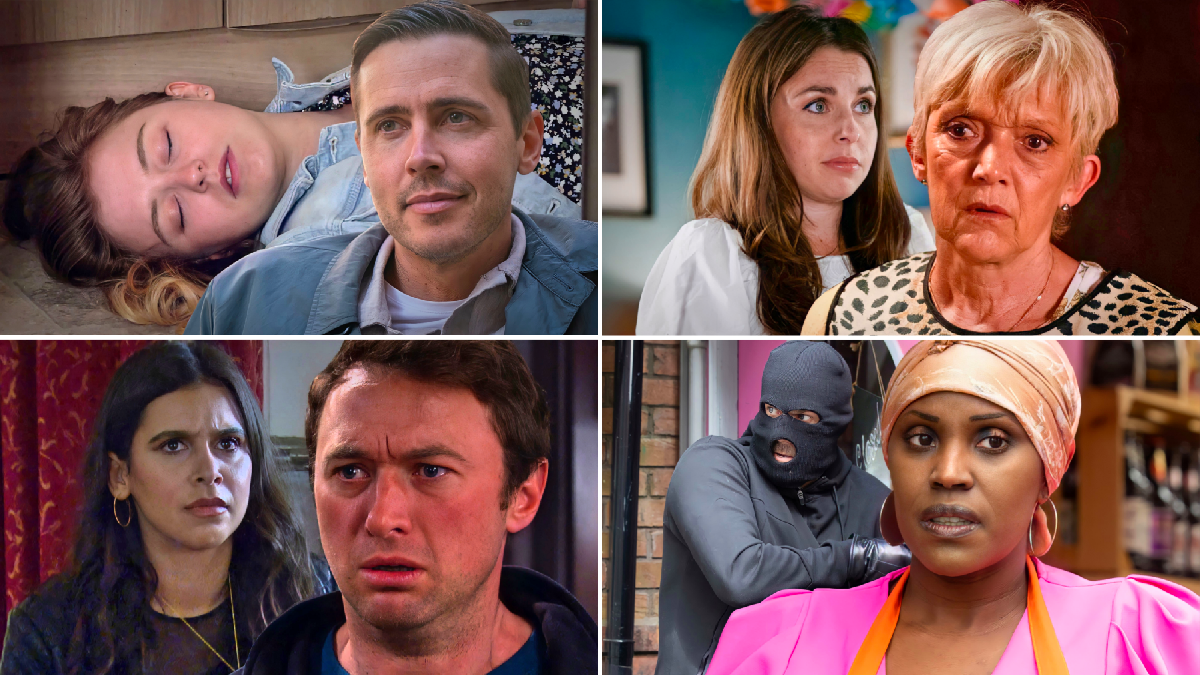 Antagonists are caught and lives are put in danger, as our favourite soaps fire on all cylinders next week!

Meena Jutla’s murderous secrets are put at risk as the day of Leanna Cavanagh’s funeral arrives, and she makes a huge error that could backfire dramatically!

Todd Grimshaw faces a similar fate, as his crimes are exposed for all to see in a classic case of home video horror. You don’t want to miss that!

Martine Deveraux’s life is on the line, as scheming Warren Fox and Fergus Collins go too far, while Walford’s finest Jean Slater gets a mysterious phone call.

And if that’s not enough reason to tune into EastEnders, Gray Atkins faces exposure, after Chelsea Fox finds an earring belonging to Tina Carter!

Coronation Street and Emmerdale have ditched the box-set format following the final of Euro 2020, manning you’ll have to catch them nightly.

EastEnders, however, continues to stream each and every Monday on iPlayer until the end of the Tokyo 2020 olympics, meaning that you’ll be able to binge all of next week’s action in one go!

Hollyoaks, meanwhile, will air as usual on Channel 4 and E4 respectively.

Fancy some weekend reading while waiting for the next batch of your favourite soaps? We’ve got you covered, with an in-depth look at all of next week’s unmissable moments in the land of soap.

1. Todd and Billy set a date for the wedding, but their happiness is short-lived as revenge comes calling, and it’s oh-so-delicious! Will, realising Todd’s ripped him off, comes clean to Summer about everything – including how Todd tried to split up Billy and Paul! Determined to expose him, the young lad then sends a video to Paul, who subsequently swaps out the laptop at the calendar launch party. Emma introduces the clip and presses play, but it’s not the calendar that goes up on the big screen, but rather it’s a video of Todd telling Will how he successfully split up Billy and Paul! Billy, disgusted, walks off, while Todd is arrested for theft!

2. Billy and Summer agree that they did the right thing in reporting Todd to the police. Summer and Aadi spend some time together in Victoria Garden, and when Aadi offers her a fruit cider, Summer is convinced one bottle won’t upset her blood sugar. However, she soon goes home, feeling unwell. When Todd gets wind of such a thing, he kicks the door in, to find Summer unconscious on the floor!

3. James, having been offered £30,000 for his interview, takes a sports car out for a test drive. A policeman, however, pulls them over, and when James asks the reason why, the officer retaliates by arresting him! James is handcuffed, and he trips, injuring his leg. Michael watches in horror, convinced that they’re victims of an unprovoked racist attack.

4. Laura tells journalist Chris that she wants to sell her Kelly’s story. Chris, however, informs Daniel, who relays the information to Imran and Toyah! Enraged, Toyah and Imran tell Laura they’ll report her to social services if she goes to the press, and before long, Laura is taken way by the police on suspicion of child cruelty.

5. Hope overhears Fiz and Tyrone arguing, and she demands that they both assist her with her school project. The feuding parents agree to do so, but when Hope includes Phill in the project, Ty gets jealous, which Fiz finds amusing. 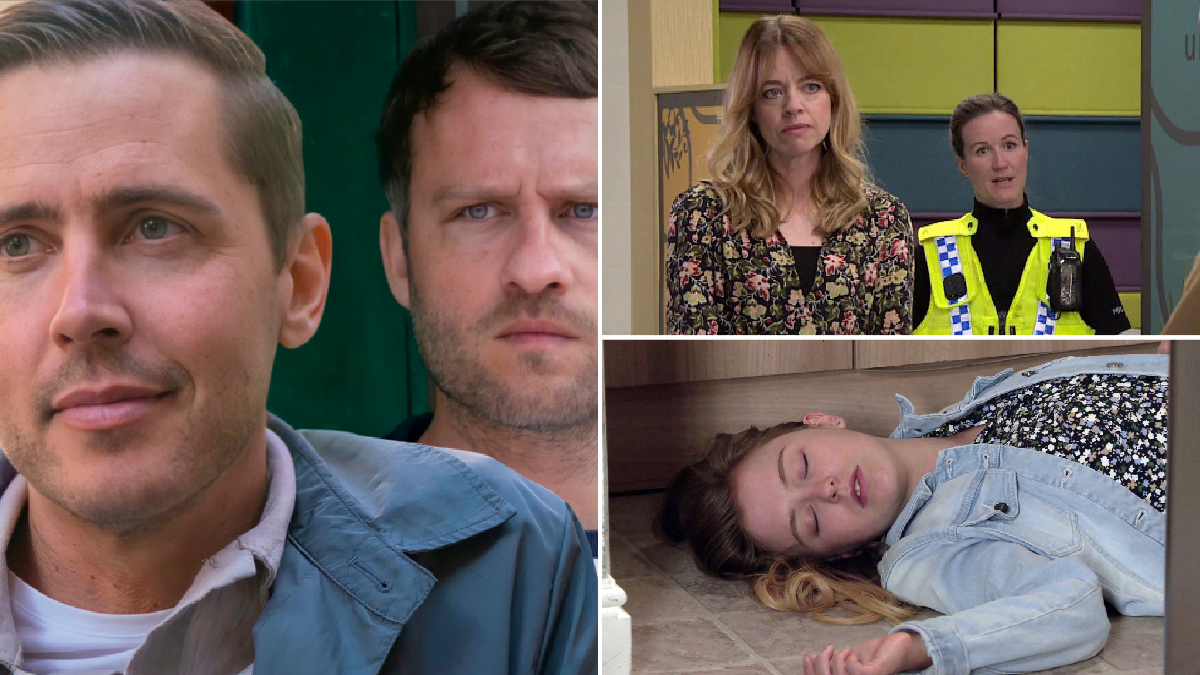 7. Steve, Tim, Dev and Chesney feel guilty about missing the calendar launch party, but they soon find out that it didn’t go ahead. Curtis and Emma, however, are touched to see all the men in question have gone to the trouble of advertising the calendar in their shop windows.

8. Nancy hurries Zack out of The Vic, after they fall asleep. She subsequently has a run-in with Mick and Frankie who, both up early, want to know who has been sneaking around. Putting two and two together, the pub landlord confronts Zack, demanding that he end things with Nancy. Zack does just that, leaving Nancy heartbroken. After the dust settles, Nancy resolves to go travelling again, leaving Linda fuming, and therefore she confronts Zack, forcing Mick to improvise.

9. Ruby, ahead of her operation, instructs Martin to prioritise his daughter when he remembers she’s got a dentist appointment. Jean, meanwhile, gets wind of this and goes to the hospital with Ruby, leaving Ruby and Martin both feeling grateful. Ruby offers Jean money for helping out, but Jean declines. The duo enjoy some much-needed relaxation as they do face-masks together, but things take a turn when Jean gets a call!

10. Chelsea’s hold on Gray continues to grow, as she persuades him to skive off work. The couple then meet her friend Luce, who has a van full of dresses. Chelsea needs a new outfit for court. However, Gray soon realises that the dresses are stolen! Chelsea sweets talks her way around him, leading them to have some fun in the back of his car. Chelsea spots an earring, however, and it’s not just any old earring. It’s Tina’s!

11. Kat notices Billy struggling to pay for his lunch, while she’s out with Phil. Bobby, meanwhile, mentions that Dana’s dad is a cabbie, and Kat wants to interview him. Billy overhears, and shows up for an interview too. Kat, however, gives the job to Harvey, leaving Billy upset. Kat notices something’s up, and later she spots Billy at the car lot, putting two and two together. Desperate to help, she calls Honey, Phil and Lola over and tells them what she’s discovered.

12. Karen is desperate to fix things with her kids, but Bernie changes the subject, telling her all about Tiffany’s fillers. Keegan isn’t too pleased about what his sister has done! Vi later spots Bernie, and comments that she’s looking rather ill. Bernie, unbeknown to Vi, has been taking more diet pills, and Rainie, thankful for what she’s doing, offers her some more money. Later, Bernie and Keegan work out their differences, but when Keegan reveals he’s worried about her, Bernie can’t help but feel guilty over the diet pills.

13. Tiffany is trying to make some extra cash, and Keegan can see that she’s trying. However, he isn’t ready to forgive. Whitney offers to help financially, but Tiffany is adamant she must sort this by herself. Keegan has a change of heart when he sees how stressed his wife is about her upcoming graduation party, and therefore he offers her some money to buy a new dress. Tiffany’s insecurities take over again, however, and soon enough she feels as though she needs more work done.

14. Lola is dedicated to Isaac’s recovery, much to Sheree’s dismay. Patrick, however, tells her that Lola is doing a great job, which leaves Sheree livid.

15. Liam won’t engage with Leyla or Jacob over Leanna’s funeral arrangements, and he berates them for their overblown ideas, informing them that he’ll be arranging the funeral from here on out. The GP meets with Charles to discuss a more reserved, traditional service, but Jacob interrupts and things soon reach boiling point! Jacob rages, claiming that he knew Leanna better than Liam, leaving the grieving dad devastated, as he storms out.

16. Meena attends the funeral, and she covertly fiddles with Leanna’s ring, which is attached to her necklace. The ring, however, falls from her necklace in a shock twist, and it rolls across the floor, stopping beside Liam’s shoe! The killer is horrified, as she fears her murderous nature will be exposed.

17. Ben is torn over his dad’s emotionally blackmailing texts, and so Aaron urges him to delete them and focus on himself. Ben, in spite of conflicting emotions, agrees. Aaron suggests that Ben move in with him, but Ben declines his offer, explaining that he cannot live with another alcoholic. Aaron is angry at Liv for ruining things, and when he discovers she’s back on the vodka, he blames her for everything! Liv, however, retaliates by claiming that perhaps Ben just isn’t that into him! 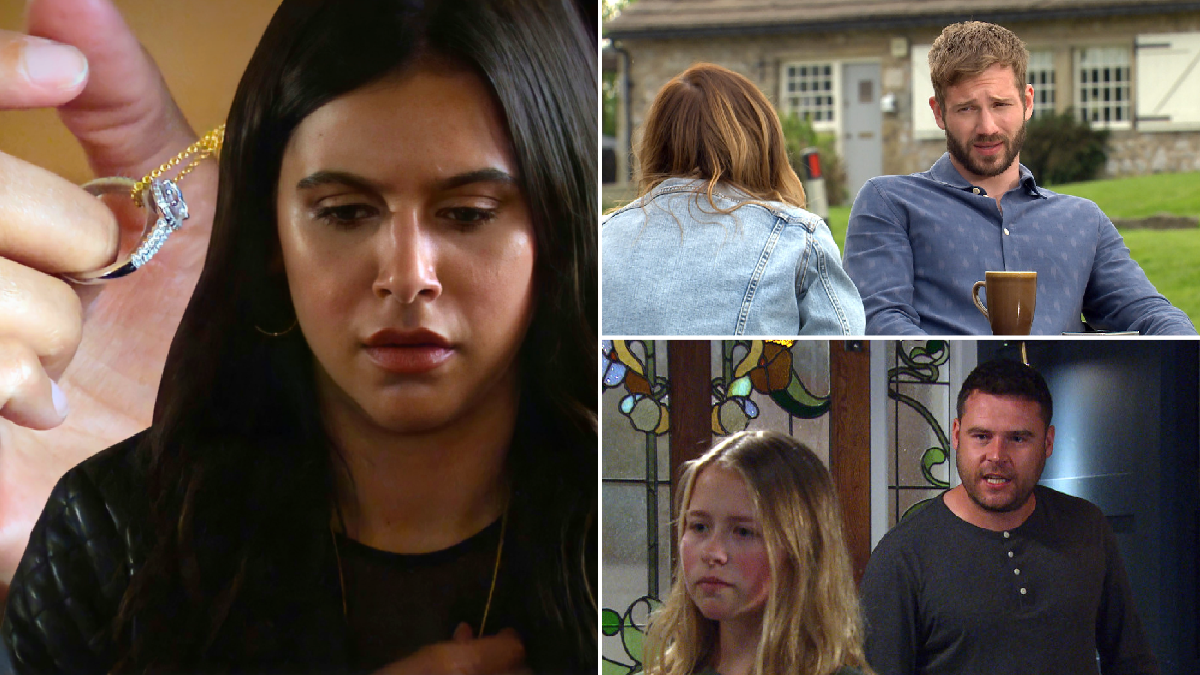 18. April is horrified when she receives a cruel meme of Donna on her phone, but Cathy suggests that she keep it to herself. Marlon, however, soon works out that something is not quite right, and he demands she tell him the truth. Afterwards, he finds April at Donna’s grave and, tearful, he apologises for letting her down. Desperate to rid her of the bullies, he takes her phone and deletes her social media accounts.

19. Diane, wanting revenge on Jamie for his cruelty towards Gabby, decides to chuck his belongings out of the B&B.

20. Kim plays Paddy in order to get what she wants. The question is: just what is she after this time?

21. Mercedes returns to the village, leaving her nearest and dearest elated. Well, except for Cher, that is! The landlady soon makes a shocking discovery, and afterwards, she’s adamant that she did not abduct Eva. Peri, meanwhile, overhears a conversation, and jumps to the wrong conclusion, revealing that it was Cher who set Mercy up! Mercedes, reeling, confronts Cher, armed with this new information, but will Cher admit to what she’s done?

22. Fergus and Warren, desperate to get under enemy Felix’s skin, hit him where it hurts, as they target Martine. They purchase Price Slice, and get the council to issue Martine with a warning regarding the shop’s trading hours. Their plans to manipulate Walter into letting the shop backfire, and therefore they decide to rob the safe! Warren breaks in, but afterwards, one resident’s life is left in jeopardy.

23. Donna-Marie scrambles to sort out a last-minute gift for Romeo, after she fails to get an invite for his party. James, meanwhile, offers her some advice, and soon enough she realises that the gift is not the most important thing. Her attention is diverted elsewhere, however, as she sits outside The Dog and gets into a fight with Goldie! A heated argument ensues, and caught up in the intensity of it all, Goldie end up revealing that Romeo slept with Mercedes! 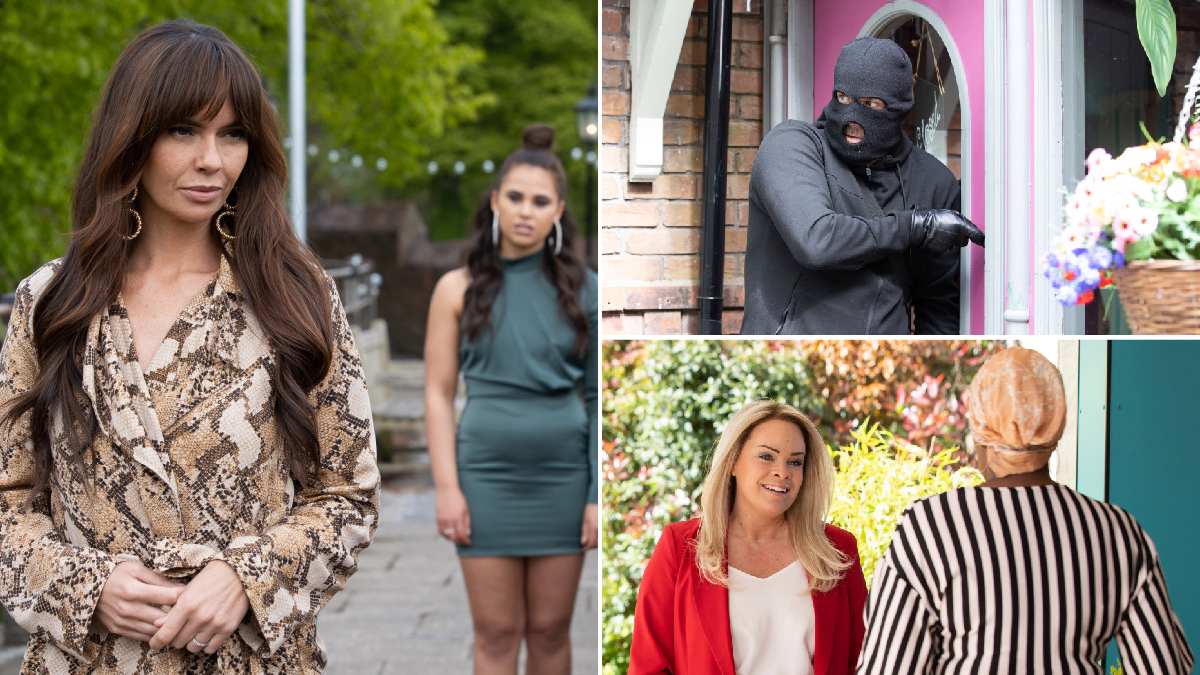 24. Brooke starts to question their relationship with Imran, and a conversation with Ripley makes them come to a realisation. Afterwards, Brooke uses the term non-binary for the first time.

25. Sylver is shocked to discover that money from his account is missing, and Mercedes is left scrambling for words!