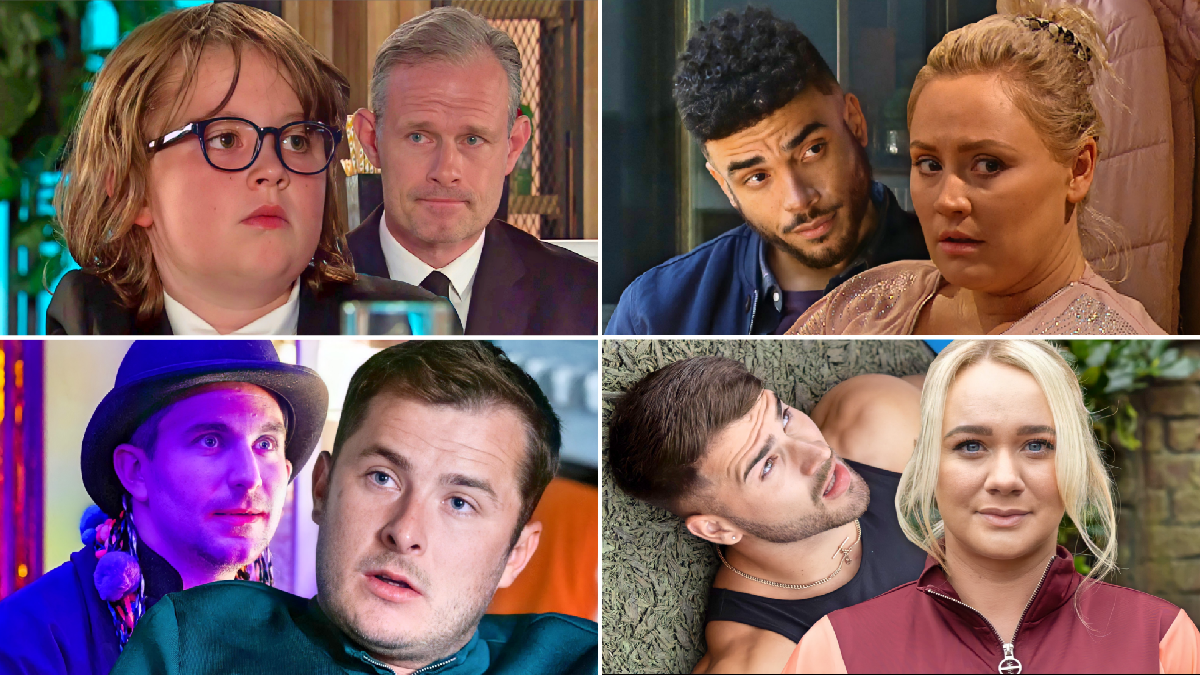 There are shocks in store for some of soap’s finest next week, as accusations are made by some, while others go too far.

Sadness, however, reigns supreme in Coronation Street, as Natasha Blakeman’s funeral arrives, and Sam therefore says goodbye to his mum.

Tracy Metcalfe is concerned about partner Nate Robinson over in Emmerdale, who enjoys a night out with Billy Fletcher, but questions are soon asked about his whereabouts the following morning.

A week full of drama lies ahead, but if you fancy a little sneak preview, we’ve got you covered.

1. Kelly’s hearing takes place, and the judge reveals that she’s releasing her with immediate effect. Imran and Toyah, however, are informed that the might have to choose between Kelly and Elsie, so Kelly makes the decision for them, telling them she’ll live elsewhere, but upon returning to her new accommodation, she finds the word ‘murderer’ sprayed on the wall.

2. Desperate to make amends, Kelly approaches Nina, but Nina informs her she’ll never forgive her for what she did. Roy, however, suggests that she cut her some slack, as Kelly appears to be genuinely sorry. But Kelly soon finds herself in trouble when Dev notices a scratch on his car and assumes she is to blame. One thing leads to another, and as the week comes to a close, Kelly beds down in a shop doorway for the night – lonely and frightened.

3. The day of Natasha’s funeral arrives, and as the hearse pulls up in the street, Sam squeezes Nick’s hand. Afterwards, the family gather in the bistro, and Sam hands Nick a eulogy he’s written, which Nick agrees to read out. But he struggles to contain his emotions.

4. Abi hands Jack a document, explaining that she’d love to adopt him if he’ll still have her.

5. Summer offers to babysit Bertie, and later tells him how much she enjoyed doing so. Daniel is pleased and they make a start on her interview prep, but as she comes out of Daniel’s flat, she pains on a smile for Aadi, while wistfully glancing back. Adam, meanwhile, calls round and quizzes Daniel about his intentions towards Daisy. Mistakenly assuming they’re discussing her, Summer’s thrilled

6. Aadi points out how Dev rescued Asha but left him to die in a burning car. Dev does his best to reassure Aadi that he loves him and his sister equally, but he makes it clear that he’s always felt as though he’s playing second fiddle to Asha.

7. Ronnie urges James to have a word with Danny, and he soon does just that, suspecting that his beau turned down a job offer because of him. Danny doesn’t deny it, and James urges him to follow his dreams and accept the job offer in London.

8. Zack takes baby Alyssa off Martin but as he walks off her toy drops and unbeknown to him, a girl watches on. Later, both he and Martin receive the paternity test results. Alyssa’s toy has been dropped off, when they scan the area, Zack sees a girl. Once him and Sharon catch up to her she tells them her name is Jada. She’s Alyssa’s mum and when she reveals who the father is Sharon and Zack are shocked.

9. Callum tells Ben and Jay about the Prince Albert’s gay icon’s event night, but notices Jay mouth something to Ben. When questioned,  Ben eventually tells Callum about  his past numerous partners,  leaving Callum feeling insecure. Ben encourages Callum to go to the event at The Albert while he has a meeting with Kheerat. At the event, a flirty guy approaches Callum and ends up giving him his number, which Ben later finds and feels betrayed.

10. Mick approaches a guilt-ridden Nancy, who opens up about her jealousy towards him and Frankie especially after the crash

11. Kim is shocked to discover that Pearl is having behavioural issues at school, her teacher pays Kim a visit explaining that Pearl needs to be challenged more because she is so smart, making Kim more determined than ever to send her to a private school .

12. Gray wants to tell his kids about the engagement and the baby, but Chelsea doesn’t think it is a good idea, she has yet to let Denise know the engagement news too. Later, Chelsea and an excited Kim announce the news, but Denise has a few home truths for Chelsea.

13. A stressed Liam helps Tiffany with a hen party booking. He comes across car keys in one of the drunken girls coat and sees an opportunity to make some money fast so agrees to being the groups naked butler.  Later, he tells Janine of his plans, and she spots a way to make this idea more permanent – stealing cars from Tiffany’s party guests, however Liam is torn, he doesn’t want to betray his sister.

14. Kat is sick and tired of Jean and Stacey arguing about Eve and threatens to move in with Phil.

15. Priya struggles with an intense nightmare brought on y her injuries, and she lashes out at Ellis, leaving him shocked by her accusations. Al gets wind of the rift and is ready to take advantage of the situation. Ellis, however, makes a heartfelt apology to Priya, and there’s a sense there might still be hope for them.

16. Tracy plans an intimate date night, but Nate heads into Hotten with Billy for a lad’s night, where he meets a woman named Fiona, who chats him up. Tracy sends him a sexy picture, but Nate misses the text due to his broken phone. Billy, meanwhile, lies to Tracy the following day about what happened last night.

17. Jai is planning on blaming Ben for the survival event disaster. Ben discovers the truth, and is horrified when Jai offers him a buy-out in exchange for his resignation. Ben decides he needs a lawyer, and Aaron gets wind of his boyfriend’s ordeal, and makes matters much worse, as he punches Jai, who ultimately suspends Ben.

18. Chas and Paddy plot to kidnap Kim’s racehorse, as they’re fed up of her calling all the shots. Will, meanwhile, stands up to Kim, telling her he cannot be with her if she continues her destructive behaviour.

19. Gabby is annoyed all of her pals are out enjoying themselves while she’s at home with Thomas, but she soon hatches a plan, as she palms her son off on both Kim and Bernice.

20. April admits that she’s been struggling in the wake of Cathy’s bullying.

21. Darren wakes up in strange surroundings in a flashfoward sequence. In the present day scenes, we see Nancy preparing for her co-deputy head interview, and thus she leaves Darren in charge of cleaning the house while she’s out. What happens next remains to be seen, but Darren’s fate is unclear, as his captor tells him that he’s seen too much, before warning him that it’s his partner who is the real danger.

22. Misbah sets out to go to the police. Ali, meanwhile, is one step ahead, as he sets out to keep her quiet – with no care about what damage he does in the process. Sami, however, is determined too outplay him, and he’s certain he’s got a secret weapon that can help him in doing so.

24. Nate’s partner Lexi reminds him of their reason for being in the village, but Nate is distracted, convinced that one of the Deverauxs must know what happened to his old flame, a face that is in fact familiar to them all.

25. DeMarcus decides to buy something nice for Martine but he’s short on money and leaves Nate an IOU. All the while, he’s being watched by his teacher resulting in a visit from his mother, Viv, that could cut DeMarcus’ time in Hollyoaks short.