To his devoted followers, he was known simply as The Ghost. He would float into our lives for three hours every Friday afternoon, spinning tracks drawn from his vast and eclectic musical library and sharing pearls of hip wisdom. Then he would disappear into the night for another week. 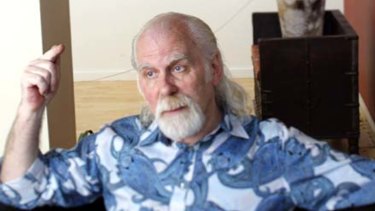 For more than three decades, Stephen Walker ruled the roost at the community radio station 3RRR-FM. His public persona was The Ghost Who Talks, the presenter of the iconic "The Skull Cave" and the "nemesis of mediocre radio everywhere".

Cult figure, guru, tastemaker, he was all of these, but the influence of Walker, who died aged 69 on Wednesday after a short battle with cancer, extended far beyond that one show.

Through his distinctive vision and strong personality, as program manager for 12 years in the 1980s and '90s, Walker turned Triple R from an eccentric little radio station into a major cultural force.

Long before Spotify, Facebook and YouTube infiltrated our lives, for many Melburnians Triple R was our social media. It was how we discovered new music, kept up with trends, explored challenging ideas and connected with others with the same interests and values. It opened the world to us.

Literally hundreds of local bands and artists owe their careers to Triple R, their precious first demo aired on the station, their early gigs promoted: from the Birthday Party and Sports in the late'-70s, through Paul Kelly and Hunters & Collectors, Magic Dirt and The Drones, through to current favourites like Courtney Barnett, Cable Ties and RVG.

Walker set about introducing a structured grid, instilling a patina of professionalism.

Triple R has played a similar role in theatre, film, visual arts and literature. Has any other cultural institution been as important in this city over the same period?

It was Walker shaped the ethos of Triple R when he took over as program manager in 1984.

At the time, Triple R was seven years old and had recently moved into a converted factory in Fitzroy. The station was perpetually on the verge of closure due to financial issues or yet another run in with broadcasting authorities. The volunteer database was a tattered sheet of paper pinned to the studio wall with a handwritten list of names and phone numbers.

Walker set about changing this, introducing a structured grid, instilling a patina of professionalism, getting rid of dead wood and giving a break to and mentoring fresh talent, some of whom, such as Blues and R&B aficionado Max Crawdaddy, are still on air decades later. Others, like the Coodabeen Champions, went on to be household names.

In discovering new broadcasters, Walker was almost evangelical in his vision of Triple R as a cultural beacon for Melbourne. He fervently believed the station had duty to be subversively educational and pictured the ideal Triple R listener as a modern-day renaissance man or woman who tuned in for both esoteric discussions about cinema and hardcore punk music, someone who had a rock 'n' roll attitude to spoken word and an intellectual attitude to music.

"Education could be something that every time you turned on the radio you learnt something," Walker said in Radio City, my history of the early days of Triple R. "You heard a new idea, you heard a new musical style, you heard a new approach to an old idea. You heard ideas not only spoken but buried in the music."

Along the way, his abrasive style made him enemies. He was sometimes denounced on air by broadcasters he had offended.

To be played on his program was the ultimate stamp of approval for any artist.

Through it all, Walker continued to host "The Skull Cave", an impeccably curated reflection of his diverse musical tastes, which ranged from punk to electronica to avant garde jazz, reggae and good old Blues and rock. He was a passionate believer in the power of music who strove to challenge and educate his audience. To be played on his program was the ultimate stamp of approval for any artist.

After a diagnosis of multiple sclerosis, Walker was forced to retire from the job he loved in 1996. But even when in debilitating pain, he continued to pour his heart and soul into "The Skull Cave" every week. Finally, almost a year ago, he handed over the reins to a younger host, who re-named the show "The Cave" in tribute.

Constantly renewing itself, Triple R has lost none of its energy, credibility or its relevance at the centre of the life and culture of this city.

Literally hundreds of broadcasters have been through the station’s doors over the years, but to this day they adhere to Stephen Walker’s vision. The Ghost may finally have gone to rest, but his legacy is secure. As The Ghost himself would say, "plant you now, dig you later".