Spoiler alert! Do not proceed if you have not watched Netflix’s Dash & Lily. To learn more about how the Jonas Brothers’ cameo came to be, read what executive producer Nick Jonas told ET.

If Netflix’s sweet holiday romance, Dash & Lily, made you wish for the days of adventures in idyllic snowy New York streets, discovering the city’s hidden gems and Jonas Brothers concerts, you’re not alone. The eight-episode series ends with the titular characters, Dash (Austin Abrams) and Lily (Midori Francis) — who spent much of their time trading dares, dreams and desires in a red notebook they passed back and forth at various locations in the city — sealing their unconventional romance with a kiss at a picturesque windowsill at the bookstore that started it all.

“I can only assume that you would have to do it with the second book if it did [get a second season],” Abrams told ET’s Leanne Aguilera, referring to 2016’s The Twelve Days of Dash & Lily, which takes place a year after the events of the first book. (A third book, Mind the Gap, Dash & Lily, was released in October.) Co-star Troy Iwata, who plays Lily’s gay brother, Langston, echoed Abrams’ wishes: “I would like to see everything that Rachel and David wrote in the second book. I would like to stay true to their vision.”

“It’s always in the back of our minds but I would say, especially in times like these, we’re just so grateful that we have this show done and shot and that we get to show it to you and we’re so proud of our season and I think that we’re going to leave it there and see how it goes,” Francis answered diplomatically.

“Just based on how I see people rallying around, just the knowledge of a TV show being presented and I feel like they’ve made several books for this exact thing. So why can’t the show continue this as we as actors continue showing the fans what they want to see from the characters?” said actor Dante Brown, who plays Dash’s best friend, Boomer.

Francis discussed how she and Abrams found their onscreen chemistry, since they barely shared screen time until closer to the end of the season, crediting regular outings in the Big Apple and adopting Dash and Lily’s notebook adventures off set to help create a palpable connection. 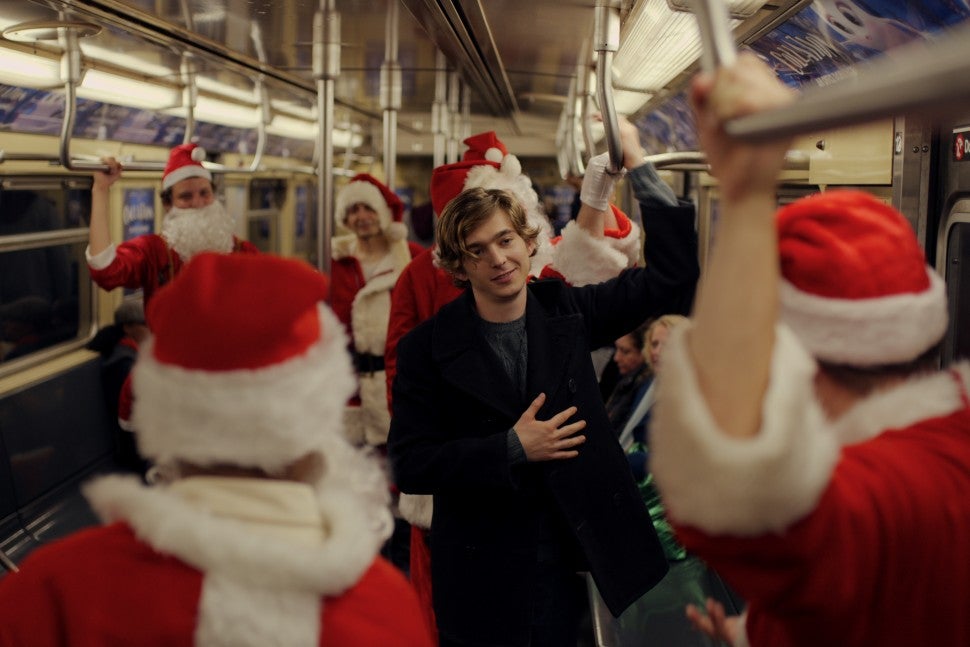 Though the Dash & Lily finale tied everything up in a neat(ish) bow for the new couple, Lily did abandon her parents in a New York City cab as they were on their way to the airport to leave behind the city once and for all. Abrams and Francis waxed poetic on how they ended up celebrating New Year’s Day together.

“Do you think they stayed in there [at the bookstore] the whole night or do you think they leave? Maybe they got breakfast!” Abrams posited, with Francis adding, “I’d like to think that after a certain point knowing we were going to get in trouble and grounded that we were just like, ‘OK, whatever.’ So, we stayed there all night. And then yeah, I think we probably went to a diner and got breakfast and then parted and then got grounded for the rest of the day and probably couldn’t leave home.”

“[Boomer] would be surrounded by everyone,” Brown said. “Boomer would just make sure there’s either a party happening or he’s going to a party. I feel like that’s usually what I’m doing most years. So, I think I really embody that lifestyle of Boomer and really just trying to make that a real concept. He’s a party guy. I feel he has Libra energy, I will say that.”

“I think Langston was probably just in his favorite spot, which was at his home on his roof with [his boyfriend] with two blankets — at least two blankets,” Iwata added.

The cast also reacted to the Jonas Brothers’ finale Christmas performance, which wasn’t originally in the plans, and Nick Jonas’ scene doling out love advice to Dash, which ended up being the catalyst for him to win back Lily.

“There were a couple other things and then [writer] Joe [Tracz] decided to go with the brothers which was good, but it was cool having them there,” Abrams recalled. “I hadn’t got[ten] to meet him, so it’s nice to be able to meet him since he’s producing it and talk to them a little bit. It was cool.”

“He didn’t come in as, like, he was a boss or anything. He just came and was really cool,” Brown shared. “I just remember talking to him about watches. I was just getting into collecting watches. He’s a big collector. So, I was like, ‘Let me see your watch!’ And [director Fred] Savage, he’s also into collecting. So, we were all in a, like, circle talking about our watches. It was just really cool to connect with [them] and he’s a really nice guy. He’s, like, really down to earth, just normal.”

To stay up to date on breaking TV news, sign up for ET’s daily newsletter.