“Dune” has competition among the most eagerly awaited titles opening the rest of the year and most likely won’t be the highest grossing of the group. But the intensity of interest is at or above anything else ahead.

Denis Villeneuve’s adaptation (or first part of a projected two-part film) had its North American premiere last weekend at the Toronto International Film Festival. But only a select few were among the initial viewers of the Warner Bros. film, to be joined by another small number who will be able to see it at its U.S. premiere at the New York Film Festival October 7 and 8.

Initial results from France, Germany, Russia, Italy, and elsewhere through Thursday are positive, with France the best at a reported $2.5 million from shows starting Tuesday night. The weekend total will be needed to fully assess, but this seems decent or better for a mid-September release.

Why the five-week delay for U.S./Canada ticket buyers? Whether it was the smart choice remains to be seen (if it makes any difference at all). But based on past practice and results, some or all of these could be among the logical reasons:

The premiere at Venice, followed by Deauville in France, gave “Dune” major European publicity, similar to how Cannes premieres boost studio films there. It is normal whenever possible to open right after. This sort of splash makes the spillover impact of North American play, often a boost for top films, less important.

The gamble here includes strong initial results. If they happen, they whet the appetite where not open. If not great, or the film falls off quickly, that would also be reported.

It is common for many high-end releases to open outside of North America. Though the five weeks here is unusually long, as recently as last spring “F9” (Universal) open overseas four weeks before its domestic play. This had no discernible impact on its North American gross.

For a film with this level of high-end interest, streaming wide as will happen when the U.S. opens on HBO Max is a risk for other territories too. Delaying the domestic showing means most of the play worldwide (except perhaps China, if it plays there at all) will be completed before this becomes a risk. 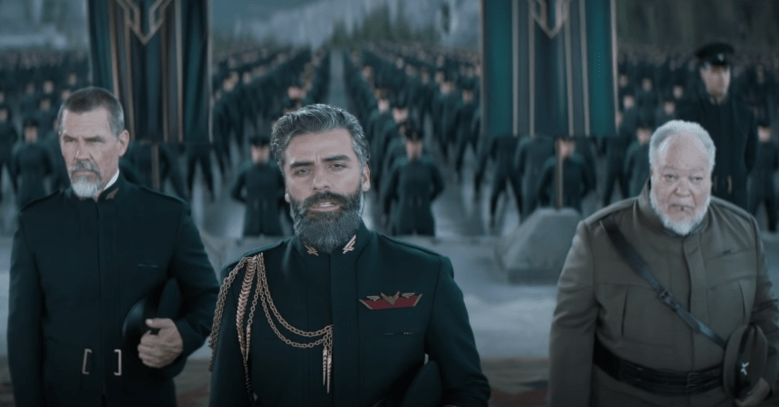 The New York Festival date conflicted with an earlier release

The New York event, one of the most rarefied and selective festivals in the world, is a terrific showcase for “Dune.” But its dates this year fell after the best time for European release. It will play on October 7 and 8.

New York plays far fewer high-end, wider-interest Oscar contenders. Thus, those that are showcased get more elevation. The showings will likely engender major media coverage. Covid travel limitations have resulted in limited appearances of the film’s principal players. Figure they will be out in force in New York.

The next best date to open after this is October 22

The New York showings could have been shifted slightly earlier to allow an immediate October 8 opening. But that was inconceivable.

Why? Because “No Time to Die” opens then. And apart from the absurdity of trying to go the same date in terms of audience competition, the problem is bigger than that.

“Dune” is expected to play on most premium presentation screens when it plays. But “No Time to Die” already has these for two weeks. By October 22, “Dune” can claim them. Apart from enhancing sales with the higher-priced tickets, providing the maximum contrast between home play and what theaters offer is particularly sensitive here.

Over the last decade, “The Joker,” “A Star Is Born,” “The Martian,” and “Gravity,” all from Warner Bros., became significant Oscar contenders. All were released in October, all grossed over $200 million.

During the same period, no September release with this combination of high-end expense and popular appeal has factored into the race. It is hardly surprising that Warner Bros. prefers to stick with successful past models.