Dan Spencer (played by Liam Fox) was hospitalised earlier this year on Emmerdale after Brenda Walker (Lesley Dunlop) accidentally gave him a wrap containing almond milk. Dan had a severe allergic reaction and was put into a coma, but when he woke up he realised he couldn’t feel his legs properly. Amelia Spencer (Daisy Campbell) has been looking for justice for Dan since the event happened, but in upcoming scenes, she could find herself in hot water after Bob Hope (Tony Audenshaw) is hospitalised.

Dan was doing a bit of DIY for Brenda earlier this year and to say thank you for his efforts, she gave him a free lunch.

However, after not making it clear that the salad dressing contained almonds, Dan quickly went into anaphylactic shock and was rushed to hospital after he lost all feeling in the lower part of his legs.

Dan was rushed into emergency surgery, but when he returned home in a wheelchair, he realised his life would never be the same again.

Eric Pollard (Chris Chittell) told Brenda to hide the evidence of the wrap and anything which didn’t have a nut warning on it, and recently she fled the village out of embarrassment for what she had done. 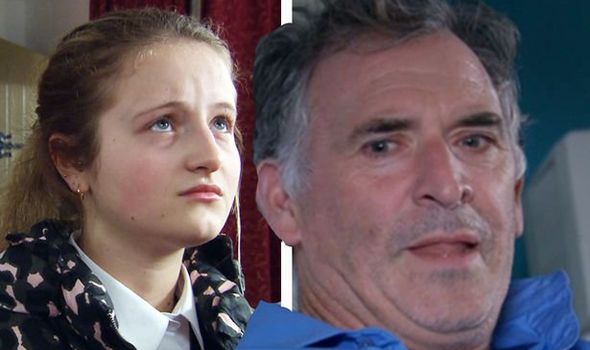 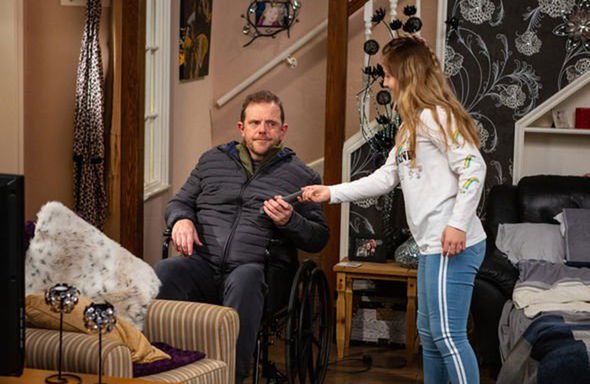 Amelia wanted to help Dan as much as she could after a number of incidents at home proved it was going to take him a lifetime to accept and get used to the wheelchair.

Dan started lashing out at those closest to him, feeling oppressed by their help and the struggle of not being able to do anything he used to.

But, in recent scenes Bob told Dan, Brenda was willing to pay him £10,000 as compensation.

Amelia was furious, claiming it wasn’t nearly enough for the life-changing damage she managed to inflict, but Dan just wants the ordeal over and done with. 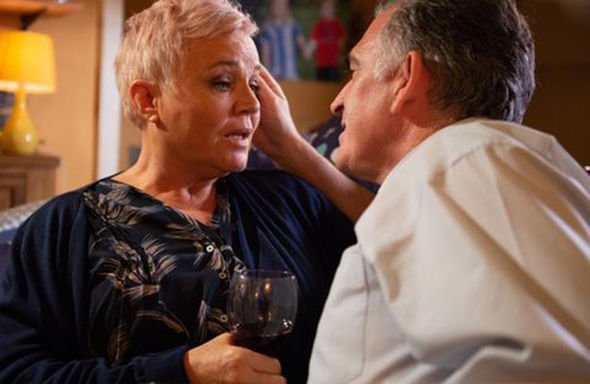 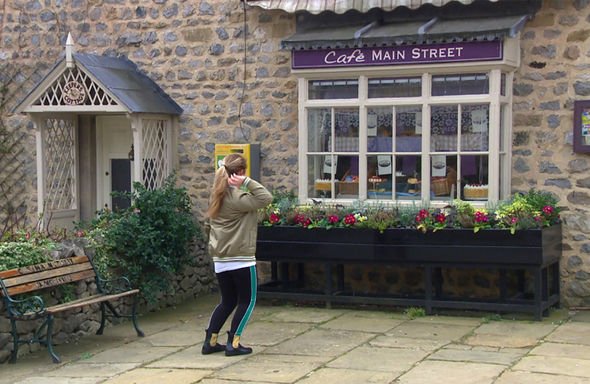 Tonight, Amelia went one step further and visited Bob in the cafe to mess with him.

She asked for a coffee and a smoothie saying she didn’t care which as they all tasted the same.

As an offer of goodwill, Bob said she could have them on the house, but when she spotted a cake she asked if that was free as well.

Bob could barely stop her before she purposely dropped the cake on the floor, but little did she know it was actually for a charity event.

Dan was hauled into the cafe, and he quickly apologised for Amelia’s behaviour.

Amelia said: “Tell him, dad, tell him that what Brenda is offering doesn’t even come close.”

Bob interrupted: “If she could give you more Dan…”

Dan said: “We will talk about this later Amelia, and in the meantime, you are going to stay here and do whatever Bob wants.

“You can take the cost of the cake out of my settlement Bob.”

Dan finally said he would accept the offer and Amelia was furious and said: “Yeah, well we shall see what the courts have to say about that.”

She was immediately dismissed, but with Amelia so adamant to get Dan justice she could do something she regrets.

In a fit of madness, Amelia could start a small fire in the cafe not knowing Bob is inside, forcing him to be rushed to the hospital.

This isn’t the first time Amelia has targeted the cafe, having thrown eggs at it a couple of months ago but this time should could try and actually bring it down.

Could it be too late by the time anyone finds him in trouble? And would Amelia ever own up to what she did for Dan or would the secret eat away at her?

Emmerdale airs on ITV Mondays and Wednesdays at 7pm.