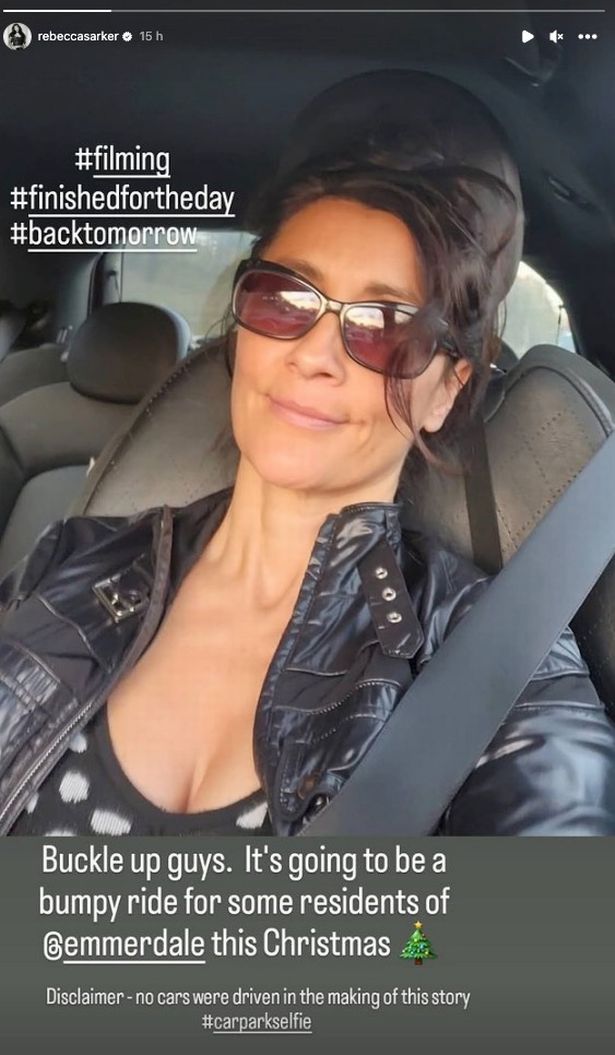 Christmas is always a time when soaps take the opportunity to crank up the drama to maximum to keep us entertained, and Emmerdale is no exception.

You only have to cast your mind back to previous years. We’ve had births – Lisa Dingle (Jane Cox) giving birth in a pig pen in 1998 springs to mind.

We’ve had weddings, including Chas Dingle (Lucy Pargeter) and Carl King (Tom Lister) getting to the altar only for Chas to expose the love rat’s evil behaviour in a memorable Christmas Day episode in 2010.

Last year alone saw a raging fire, Meena Jutla (Paige Sandhu) continuing her reign of terror and Kim Tate (Claire King) disposing of Malone (Mark Womack)’s body. How are they going to top all that?

Well, you can bet they’re going to try and Rebecca Sarker, who plays Manpreet Sharma, has given a huge hint on her Instagram.

She shared a behind-the scenes shot of herself in a car, wearing shades. It’s captioned, ‘Buckle up guys. It’s going to be a bumpy ride for some residents of @emmerdale this Christmas.’

It seems that Manpreet is going to be right in the thick of the action – but how? Could it be the repercussions from Nicola (Nicola Wheeler)’s court case against the girls who attacked her?

Other residents of the village who might be expecting a bumpy ride are, of course, Cain Dingle (Jeff Hordley) and his family.

Cain is currently in prison having decided to plead guilty of the shooting of Al Chapman (Michael Wildman) – a crime which he is taking the blame for to spare his son Kyle (Huey Quinn), who was the one who actually pulled the trigger.

With Cain determined to do whatever it takes to shield his boy, it’s not looking like he’s going to be a free man any time soon. What will Christmas behind bars hold for him?

Chas (Lucy Pargeter), meanwhile, is struggling with her grief over losing Al straight after losing her mum, Faith (Sally Dexter). There’s also the guilt she feels over betraying Paddy (Dominic Brunt), and the possibility that he will find out about it, which would be hugely emotional.

Paddy mightn’t be the only one to discover his partner has been cheating on him, either. Currently Charity (Emma Atkins) is unaware that Mack (Lawrence Robb) and Chloe (Jessie Elland) had a one night sand and that Chloe is pregnant with his child. If all that came to light, it would be high drama indeed.

Emmerdale bosses are keeping quiet about exactly what’s to come, with executive producer Jane Hudson teasing back in August, ‘There’s a lot happening! That’s your only clue!’

We would expect nothing less.