Cooper and Cohen did shots on CNN’s New Year’s Eve show, much to the delight of pretty much everyone watching at home 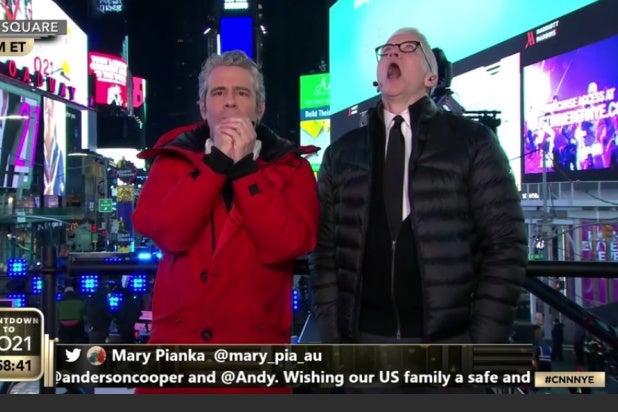 With most folks staying home for New Year’s Eve this year because of the ongoing pandemic, so many more eyes than usual were on the NYE TV specials. And CNN capitalized on the moment, dominating the social media discourse by having Anderson Cooper and Andy Cohen get drunk on air.

There weren’t any crowds in Times Square this year, but otherwise these New Year’s Eve specials proceeded as usual. It created a strange mood for the evening, and Cooper and Cohen very effectively tapped into the vibe of the country by throwing back tequila shots on TV, while everyone at home did the same.

Cooper and Cohen started the party at 8 p.m. ET, with their first shots of the night. And, well, it seemed like Anderson probably could have used a chaser.

And things escalated from there as they continued drinking throughout the night. Some of the highlights included Stephen Colbert calling in to do a shot with Cooper and Cohen remotely, and a visit from Snoop Dogg in which the rapper discussed various public places he’s gotten high at — a conversation that had Cooper laughing hysterically. And let’s not forget the shade Cohen threw at New York City mayor Bill de Blasio.

That tweet above from CJ Fogler is the start of a thread of videos of Cooper and Cohen tossing back shots, so if you want more of those videos, that’s a good place to start.

This is not the first time that Andy Cohen and Anderson Cooper have spent New Year’s Eve getting drunk live on CNN, though this is a pretty recent tradition. Given the rousing reception this spectacle received this year — the show was trending on Twitter all evening and well into the morning — it’s likely that it’s a tradition that is here to stay.

It’s a formula that makes sense, particularly for a year as unfun as 2020. There are few things a celebrity could do these days that could be more relatable to viewers than getting drunk.