E. Chai Vasarhelyi and Jimmy Chin are working on 2 feature documentaries, a 10-part series and a one-hour pilot for cable channel 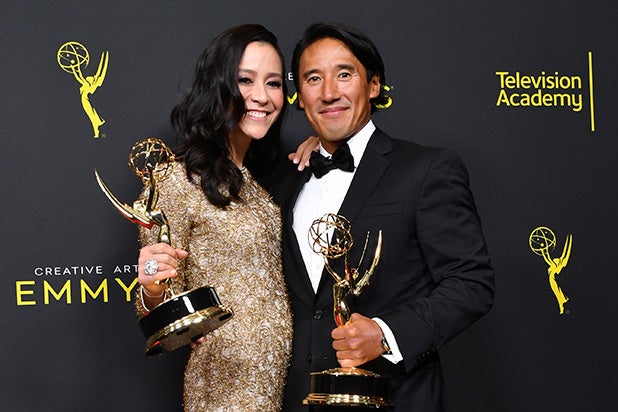 “Free Solo” directors E. Chai Vasarhelyi and Jimmy Chin have taken over for “One Day in September” filmmaker Kevin Macdonald as the directors of National Geographic’s documentary feature about the 2018 rescue of a boys soccer team trapped deep inside a flooded cave in Thailand, the cable channel said Tuesday.

With the “Thai Cave Rescue” documentary feature — which an individual with knowledge tells TheWrap Macdonald exited over “timing,” as it was originally set up at Nat Geo in March 2019 — “Vasarhelyi and Chin will bring their signature filmmaking and nuanced character portraits to the against-all-odds story of the dramatic 2018 rescue of a boys soccer team trapped deep inside a flooded cave in Thailand,” per Nat Geo. “With exclusive access and never-before-seen footage from the rescue, the film tells the story of the cave divers who challenged the limits of human potential and became the unlikely heroes of an edge-of-your-seat mission with life-or-death stakes.”

In addition to that doc, Nat Geo has set up three other new projects with the pair — who are also attached to a scripted movie adaptation of the Thai-cave-rescue story at Universal and Cavalry Media — include the doc “Tompkins” about conservationist Kristine Tompkins, a 10-part series titled “Into the Unknown” about the “minds of elite adventure athletes,” and “Photographer,” a one-hour pilot about National Geographic’s 2018 Adventurers of the Year Paul Nicklen and Cristina Mittermeier.

National Geographic Documentary Films previously released Chin and Vasarhelyi’s Oscar-winning documentary “Free Solo.” The film ranks as Nat Geo’s most-viewed unscripted special ever and the No. 1 on demand and download in the network’s history.

“National Geographic shares our deep commitment to bringing honest and inspiring stories to audiences around the world,” Vasarhelyi and Chin said. “We are thrilled to be working with them again on these powerful new projects that not only push the boundaries of filmmaking but also shine a light on the incredible resilience and determination of humankind.”

Carolyn Bernstein, executive vice president of scripted content and documentary films for National Geographic, added: “Chai and Jimmy are masterful storytellers who bring unparalleled artistry and distinctive vision to everything they do. We are proud to continue our partnership with them to tell these profound stories in an authentic yet innovative way.”

See below for the descriptions of Vasarhelyi and Chin’s Nat Geo projects, each in the cable networks own words:

THAI CAVE RESCUE
Feature Documentary (produced by John Battsek for Passion Pictures and Ventureland and Storyteller Productions’ P.J. van Sandwijk; directed and produced by E. Chai Vasarhelyi and Jimmy Chin)
On a cool June afternoon in the hilly region of northern Thailand, the Wild Boars youth soccer team was finishing practice early so that they could attend a teammate’s birthday party. Before heading to the party, the 12 boys and their assistant coach decided to explore a nearby system of caves–an outing that transformed into a two-week saga of survival and a story that would capture the attention of the world. THAI CAVE RESCUE will chronicle the dramatic 2018 rescue of the team trapped deep inside a flooding cave, the perilous world of cave diving, the bravery of the rescuers and the dedication of an entire community that made great sacrifices to save these young boys. A full 360° view of the crisis, told through unexpected angles and with untold stories, the film will bring to light the imagination and determination displayed during the heroic endeavor. Unlike most diving experiences in which one relies on a team, these rescue divers were in the water on their own, completely dependent on their gear and knowing that if it failed, that would be the end. There would be no turning back; life or death was literally a breath of air away.

TOMPKINS
Feature Documentary (produced and directed by E. Chai Vasarhelyi and Jimmy Chin; produced by Anna Barnes and Bob Eisenhardt)
One day in 1991, Doug Tompkins walked into a restaurant in El Calafate, Argentina, and changed the life of Kristine McDivitt forever. Kristine and Doug had met before, but this time their meeting instantly sparked an intense connection, leading to a lifelong romance and partnership. She became Kristine Tompkins, and together they moved to a remote area of southern Chile on a mission to save the world. The feature documentary is an intimate portrait of conservationist and former CEO of Patagonia, Inc., Kristine Tompkins, and the organization that she and Doug founded together, Tompkins Conservation. Exploring Kristine and Doug’s inspiring love story, as well as the national parks throughout Chile and Argentina that they helped create together, the film illustrates their incredible journey. It compels audiences to care about conservation and consider: What are you willing to live for?

INTO THE UNKNOWN
10-Part Series
This series takes audiences inside the minds of elite adventure athletes as they recount transformative stories of confronting fear, devastating personal loss and Mother Nature at her harshest. Through intimate interviews and self-shot archival footage from surfers, climbers, snowboarders, wingsuit jumpers, polar explorers and kayakers, learn how they prepare mentally, physically and emotionally for their high-stakes endeavors. While breaking down their process and their mindset, INTO THE UNKNOWN is a front-row seat to these risk-takers’ adventures, uncovering how they adapt and evolve, even after something goes catastrophically wrong.

PHOTOGRAPHER
1-Hour Pilot
World-renowned conservation photographers and National Geographic’s 2018 Adventurers of the Year Paul Nicklen and Cristina Mittermeier are passionate about exploration, the oceans and each other. PHOTOGRAPHER turns the lens on the pioneering duo as they embark on an ambitious four-year expedition aboard the SeaLegacy One on its maiden voyage to the Bahamas. Faced with incredible risks–physical, personal and financial–the vérité pilot explores their powerful partnership and the journey that led them on this extraordinary mission to create and protect healthy oceans through inspiring images. Each subsequent episode will focus on a different National Geographic photographer.