Generation, starring Justice Smith, is the latest provocative and must-watch series to flip the teen genre on its head following recent HBO dramas Euphoria and We Are Who We Are. Created by Zelda Barnz and her father, Daniel, and co-executive produced by Lena Dunham, the HBO Max dramedy offers a new, authentic portrayal of a diverse group of high school students and an unashamed exploration of modern sexuality. ET breaks down everything you need to know about the ensemble series.

“It came from stories that [Zelda] started to tell us about her Gender and Sexuality Alliance that were kind of poignant and funny,” Daniel Barnz said of the show’s origins, soon realizing they had a show that a lot of people across different ages, races, gender and sexual identities could hopefully relate to.

“We really hoped with the show that people who are of Zelda’s generation would see themselves in it and be like, ‘Oh, yeah, that’s kind of what it feels like.’” he continued. “And for people who are in my older John Hughes generation, that we might look back and be like, ‘Oh, god, yes, that is what it felt like,’ even if they kind of all look and talk differently than we did.”

And with Generation, the creators not only want audiences to feel seen, but they want to tell stories in an authentic way — that represents the real world. “Something that’s real and authentic is intersectionality,” Zelda Barnz, who is openly queer, said, adding that the characters here are not just gay or straight. “There’s a whole spectrum and all those identities deserve to be represented.” 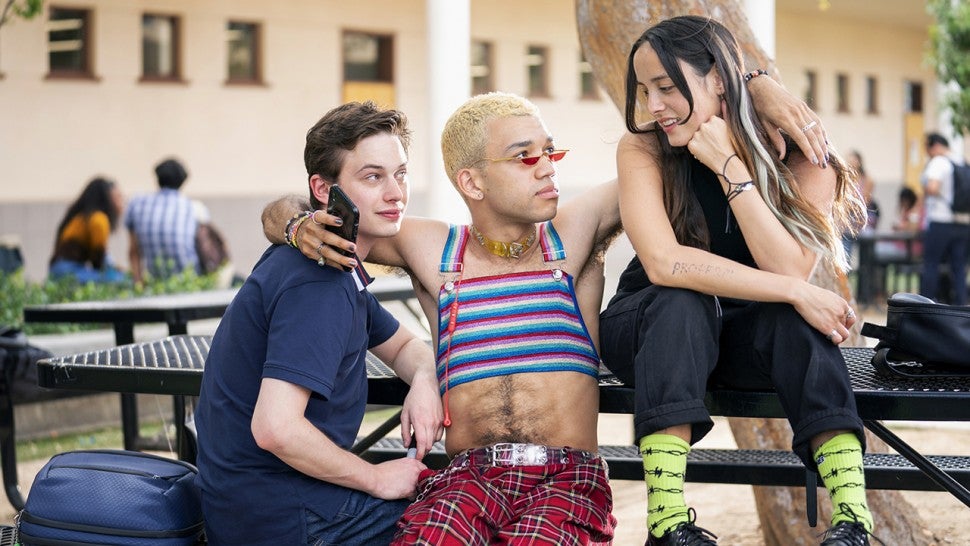 Over the course of season 1, which features episodes helmed by Channing Godfrey Peoples (Miss Juneteenth) and Andrew Ahn (Driveways), the overlapping stories of these teenagers unfold in unexpected ways. The series opens with one character giving birth in a mall bathroom while others find themselves pushing the boundaries of their family and school lives.

“I think we grew up with a lot of cliches. A lot of movies and TV didn’t quite depict high school life truthfully. And I think our show is a true portrait of high schoolers today,” Chloe East, who plays Naomi, said. “I think more and more people are creating content that speaks truth and that it is raw and uncomfortable and awkward and things that people can relate to.”

Chase Sui Wonders, who plays Riley, added, “This show has such a massive heart. There is so much truth in the humor that it finds.” 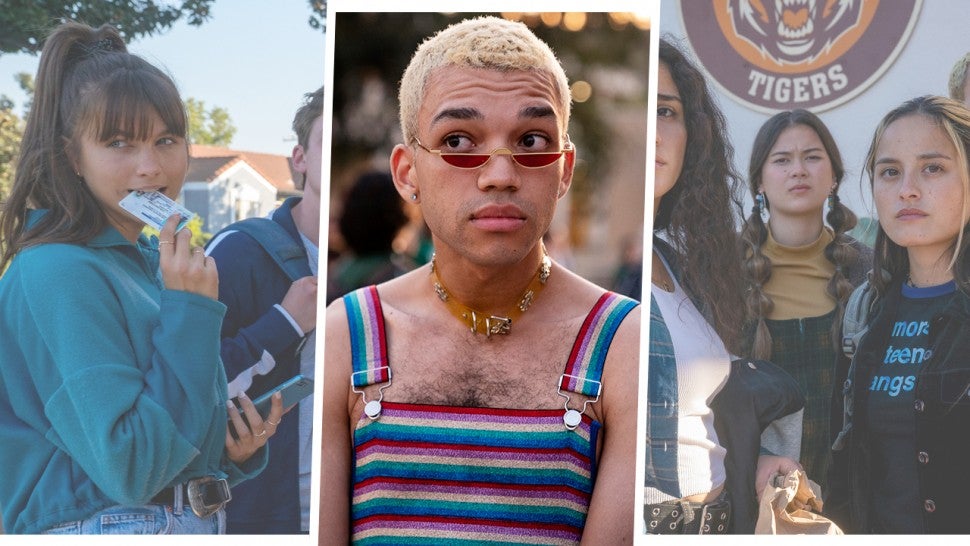 A deep thinker, Chester is a star water polo player and a straight A student. Fabulous, funny and fearless, Chester pushes boundaries and resists labels in every way. “Chester is this really bold, non-apologetic personality,” Smith said, adding that there’s so much more than what’s on the surface. “Like, you look at Chester and you already make assumptions about him, you know?” he continued, saying that “Zelda and Daniel did an amazing job of creating this multi-layered character.” 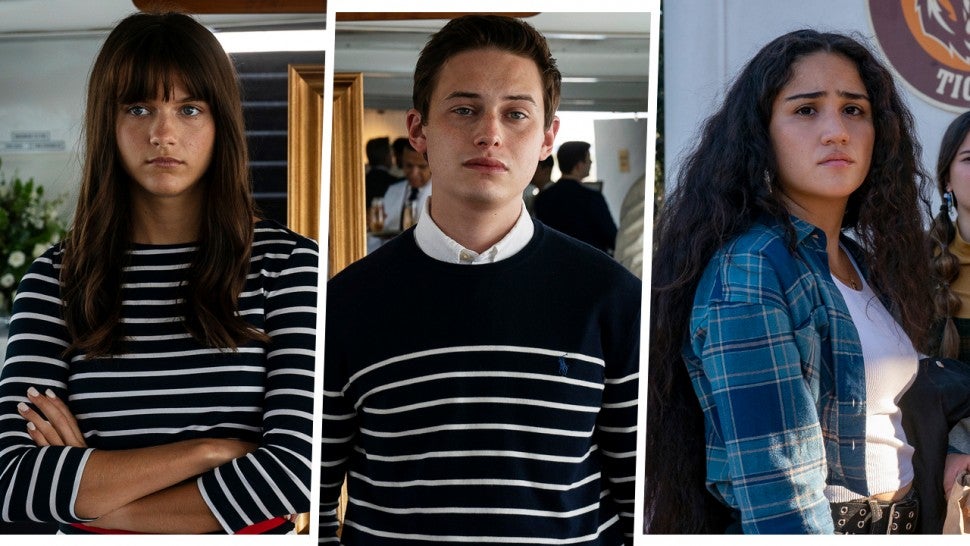 Naomi is Nathan’s outspoken and crass twin sister. While she struggles to define herself separately from her brother and wealthy conservative Christian family, she would kill for her friends. “She grew up in a perfect environment,” East said, adding that she’s “a basic girl who loves to talk.” Not only will we see tensions between Naomi and Nathan grow, but then, of course, “in the opening of the pilot, we have that dramatic mall scene with my character, where we have to deal with a surprise birth that happens to one of my friends,” she teased.

Nathan comes from a wealthy conservative Christian family. He hides his sexuality from his family, including his twin sister, Naomi. He’s insecure and suffers from foot-in-mouth-syndrome, which often leads to him wishing he had never said anything to begin with. While he grew up in the same environment as his sister, the actor said that Nathan is “trying to rebel out that a little bit more, and trying to really find out who he is.” Over the course of season 1, audiences will see him “breaking out of these molds,” he added.

Greta is first-generation Latinx, and is trying to figure out how to define herself amid powerful feelings of in-between-ness. She falls hard and fast, especially for people who are as self-assured as she wishes she was. “Greta is a person who is wildly courageous, but maybe not in the way that you might typically expect,” Sanchez said, adding that she has a hard time trying to break out of her shell. “Along with that she has very conflicting feelings towards her mom and a complicated relationship with her aunt,” she continued. “Everything is wildly overwhelming and this is the story of a girl who is learning how to overcome those obstacles and really try to blossom in an environment that is very hard to.” 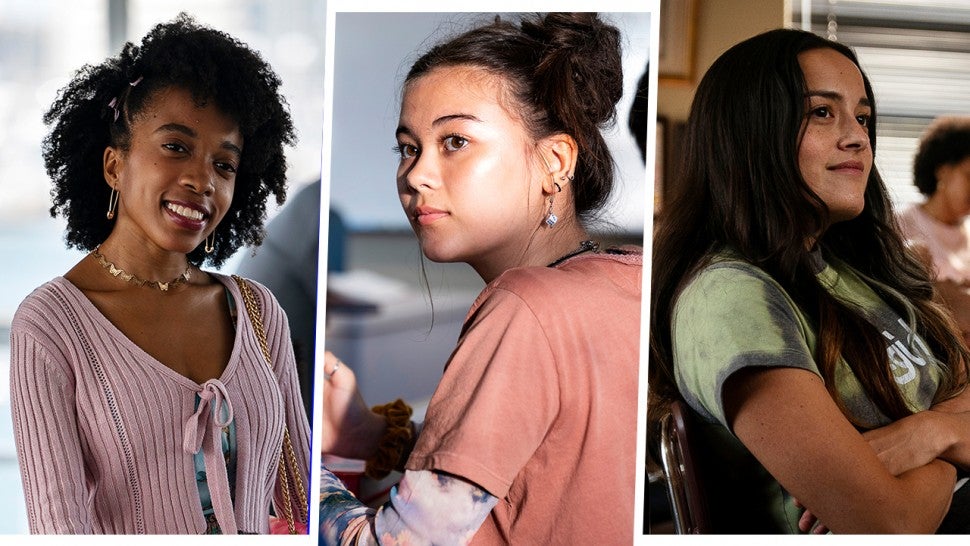 Arianna comes from a family where there are no taboo conversation topics. Her dads are open about everything. Maybe that’s where she got her to-the-point wit and humor. Caustically funny, she’s in search of a girl crew who understands her fully. “She didn’t have a mother figure growing up, so she really gravitates towards that sisterhood and needs to have,” the actress said. And as the season goes on, “you actually see her soften and you get a peek inside of who she really is,” she added.

Delilah is a social justice warrior fighting even the most unnecessary of causes. Some people take a dislike to her at first, but underneath her intensity is a deeply misunderstood, and kind, soul. “She’s not really close with any of the other characters at first,” Maxwell said. But over time, audiences will “see a more vulnerable side of her,” she added, noting that the opening scenes show how far her relationships will go and how strong their bond becomes.

So in control you often forget it, Riley’s independence and self-possessed maturity are well beyond her years. A talented photographer, she can see the pieces of other people that they would rather leave hidden away. “She has a visceral angst bubbling constantly that rears its head different ways — oftentimes in ways she cannot control,” the actress said, adding that Riley is on an emotional and rocky journey. “There’s trouble for her at home and it’s bleeding into her social interactions and the kind of baggage she’s bringing into her romantic life. She gets swept up in a pseudo-romance with Greta, which definitely teases out a different side of her.”

Upon first glance — a provocative teen series unafraid of sex, drugs and controversy — Generation does sound a lot like Euphoria. It even follows recent teen-centric and post-college series, such as We Are Who We Are, Industry and It’s a Sin. But what separates all of them, Wonders said, “is the incredible specificity with which they tell all these stories.” Once audiences start watching and take a microscope to these characters, they’ll see how Generation “feels like an entirely different world and an entirely different set of idiosyncrasies” from its predecessors.

“I think it’s important for teenagers from all walks of life to see themselves represented on TV,” Alexander said, adding that she loves all of these shows so much. “They’re all such a specific lens into a really authentic world. And Generation is just another lens from a Gen Z mind.”

Generation will premiere with three episodes on Thursday, March 11 on HBO Max. (Read ET’s guide about the streaming service, costs and signing up.) The first-half of season 1 will continue to roll out on Thursdays, with two new episodes on March 18, two episodes on March 25, and one episode on April 1. An additional eight episodes comprising the second half of the season will debut later this year.