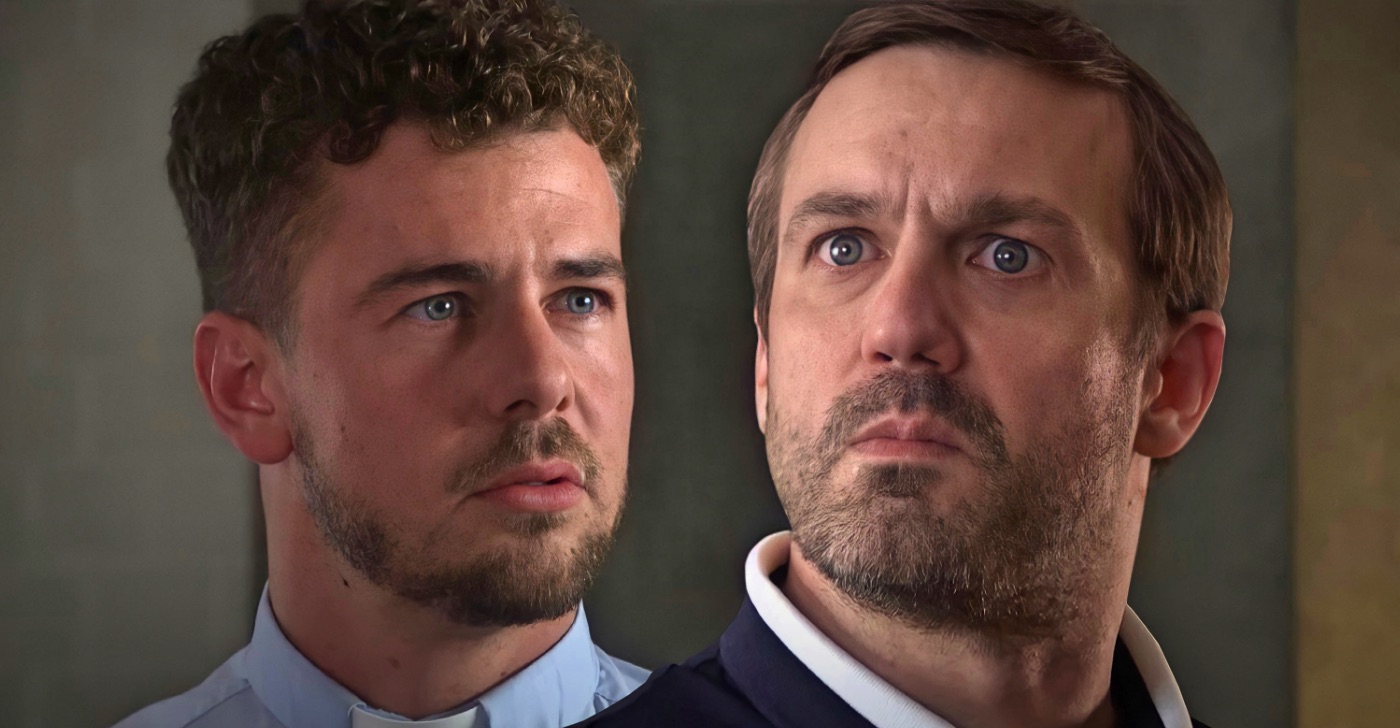 Joel Dexter (Rory Douglas-Speed) was left reeling in Hollyoaks, after working out that Warren Fox (Jamie Lomas) is up to his old tricks once again.

The priest, who was desperate to believe that his dad had turned over a new leaf, found evidence to suggest otherwise, after he spotted one of Walter Deveraux’s (Trevor A Toussaint) prized possessions among Warren’s things.

With Price Slice having been ransacked, Joel put two and two together, realising that Warren had lied to him, and that in spite of his pleas of innocence, he committed the crime.

‘It’s a bit of a tough pill to swallow for Joel’, actor Rory Douglas-Speed told Metro.co.uk, ‘considering what happened to Walter Deveraux, and Warren hasn’t said a thing. That’s really unnerving for Joel.

‘Joel gets sold down the river with that, and the truth quickly comes out.’

Joel wastes little time in confronting Warren in the wake of his discovery, and a heated showdown ensues.

‘[These scenes] are very intense, actually!,’ continued Rory. ‘I got to catch a little bit of them while doing some ADR in post-production, and they look like they’re going to be quite good. Now, I can’t stand seeing myself on-screen. I hate it. But I’ve seen Jamie and he looks great!

‘There are two scenes in Warren’s flat which are really good. It’s just great working with Jamie again – we seem to pull better performances out of each other. We have a good connection I think which comes across, and that helps the relationship.’

Joel, evidently having had enough of his lies and manipulation, leaves Warren in shock as he delivers a huge ultimatum.

‘It’s a big ultimatum!,’ teased Rory. ‘He’s going to go to the police with the evidence that he’s found, and he means it! So, he gives Warren the choice. Hand yourself in, or I’ll hand you in.’

Warren thinks long and hard about what Joel has to say, and in a rather shocking move, he agrees to do as his son asks and hand himself in to the police station!

That is, until Fergus Collins (Robert Beck) intervenes, and the scenes which follow are nothing short of chilling.

‘It looks to be that Warren is going to hand himself into the police,’ added Rory, ‘But things take a bit of a nasty turn!

‘Joel and Warren end up at a graveyard and it’s all pretty spooky! Warren is standing there with a shovel,  and he says to Joel: “How about Cleo?”. That’s a really poignant moment, not only in the scene, but for Joel the character. Obviously he has to help Cleo – that’s his backbone, that!’

Joel relents in the wake of Warren’s threat on Cleo McQueen’s (Nadine Mulkerrin) life, but one can’t help but wonder if this is really it for the father and son duo’s relationship?

‘I think it is!’ said Rory. ‘But then when you’ve got someone making massive threats that is so volatile, I think you still have to keep them on a bit of a leash, as you let them out of your sight you never know what could happen!

‘So I do think there will be a calm before another storm breaks out in the next few months between those two. A bit of cat and mouse between the two of them, which will be really good to do!

‘In the next six months, keep a close eye on the two of them, I think we’ll be seeing great things coming up!’