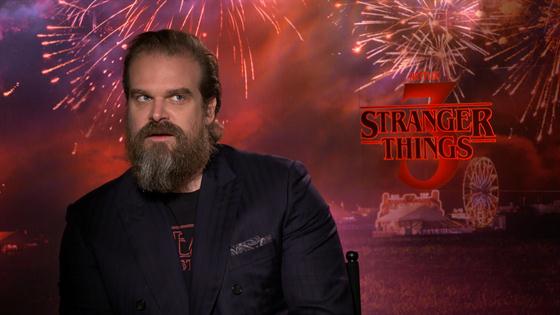 It’s been a few days, and if you made the correct life choices, you have finished Stranger Things season three by now. If you haven’t finished, this is your one and only spoiler warning.

The third season of Netflix’s massively popular sci-fi drama was told over eight expertly-paced episodes and ended with a heartbreaking death…or did it?

Following a series of misadventures, Joyce (Winona Ryder) and Hopper (David Harbour) made their way through the Russian compound to close the door to the Upside Down, but at what cost? Hopper was not protected by the energies produced when Joyce shut down the machine opening the portal. Others in the range were obliterated. Viewers never saw what happened to Hopper. Then, during a mid-credits scene, the series revealed there’s an American prisoner in Russian—and the Russians have a Demogorgon.

Harbour has been praising the finale for its powerful emotional beats.

“I mean, it’s the most moving thing I think we’ve ever shot. There’s a profundity to the season in terms of change, movement and the passage of time even, that’s even bigger than monsters and things like that,” Harbour told E! News about the ending. “I will say that there’s a great Heraclitus quote which is like, ‘Nothing endures but change. Things have to change.’ And the weird thing about doing a television is you fall in love with people, you fall in love with the things about it, and you want them to always to be that thing. And then sometimes life doesn’t go the way you want, and things have to change. Part of that can be painful, and part of that can be miraculous and wonderful.”

He even posted a little tribute on Instagram as well.

‘Feelings. Jesus. The truth is, for so long, I’d forgotten what those even were…and then, I left some eggos out in the woods…’

‘Feelings. Jesus. The truth is, for so long, I’d forgotten what those even were…and then, I left some eggos out in the woods…’

In an interview with EW, Harbour refused to spill any kind of beans. “I mean, I don’t really know but we will have to see together,” he said about Hopper’s fate. “It’s a pretty serious situation that he gets himself into there at the end and it’s a pretty moving arc in terms of the way this all plays out. So I think we’ll sort of leave it at that and see if there is a life beyond, but I’m not sure yet.”

Naturally, series creators Matt and Ross Duffer—aka the Duffer brothers—aren’t saying anything about the ending. The Russians never identify who is in their holding cell, just “the American.”

Before the end credits scene, viewers saw a now-powerless Eleven (Millie Bobby Brown) leave Hawkins with Joyce, Jonathan (Charlie Heaton) and Will (Noah Schnapp) for parts unknown. Joyce gives Eleven a piece of her adoptive father to remember him with: the scripted heart-to-heart he never had with Eleven. It was an emotional scene, one that Brown didn’t want to rehearse, she told EW she wanted to hear the pre-recorded reading Harbour did for the show.

“I just immediately wanted to put a camera on me and find the way I react and the way I reacted was pure devastation and sadness, and a distraught child that just lost her father or so she thinks,” Brown told EW about filming that scene.

Key phrase there, “or so she thinks.”

“So it was definitely a raw emotion, especially because David Harbour and I are really close. He is just one of the greatest men. I think something I admire about David is he respects girls and women so much. It felt so … I’m so gutted and I was like, ‘Oh, my God, this is horrible.’ So the emotions were raw in that scene for sure,” Brown said.

Stranger Things season three is now streaming on Netflix. There hasn’t been an official season four announcement, but it’s only a matter of time.