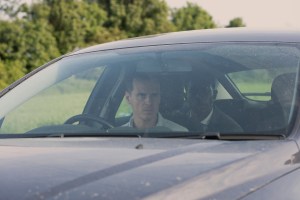 The Hot Priest is even hot over the phone. Apologies to Andrew Scott, who seems too lovely and thoughtful a man to be reduced to the nickname Hot Priest, especially after a 30-minute chat about love and despair and shame and other aspects of the human condition during which his face was not even visible. But there is the voice — a soothing lilt decorated with hints of his Dublin upbringing, a little bit like a (hot) therapist. And there is the ruminative quality of his thinking, like a great (hot) first date who’d be happy to pour out a bottle or two of wine and dig deep on all the big ontological questions. There is even a certain priestiness about him. A sense that he’s spent good time contemplating life and all of its vicissitudes, and he can guide you to some higher level of understanding.

For example, asked about the personal resonance of the (spoiler alert!) bittersweet finale of Fleabag Season Two, which sees his aforementioned priest and Fleabag profess their love for one another but part ways, he begins, “There’s this idea that the only love that is pure and worthy of representation is a love that is forever, a happy-ever-after story. But I think for so many of us there are people that come into our lives that are incredibly potent, and sometimes people who are in our lives for six months can have as much of an influence as somebody who we would spend 15 years [with].

“I don’t think there’s a time capsule,” he continues, “that you can talk about the ratios of how much power you’re allowed to exert on somebody. It’s not a question of time; it’s about the intensity of the connection. And sometimes the connection is stronger because you know that it isn’t going to last forever.” He pivots to a description of a scene in the final episode: “I think it’s absolutely extraordinary, the speech [the Priest] has about love being awful and painful and all the other things. To my mind, it’s a very responsible, human representation of the way love presents itself. It’s not just wonderful, saccharine and all-consuming.”

While Scott, 42, has been acting professionally on stage and screen since at least the mid-Nineties, and in 2012 won the U.K.’s prestigious BAFTA award for his devilishly twitchy portrayal of the villain Moriarty in the BBC’s Sherlock, he’s only recently broken out with American audiences thanks to a fantastic one-two punch of roles: Fleabag’s priest and a grief-stricken driver-for-hire in Season Five of Black Mirror. Both characters are more understated than Moriarty, a part which allowed Scott to be by turns loopy and sinister, melodramatic and spiky with rage; but they all bubble with a just-below-the-surface volatility, a feeling that even in the quiet moments, they could suddenly turn into someone just a little bit dangerous or unhinged.

Though most of the attention heaped on the Priest has focused on his looks and romanticized his ability to see past Fleabag’s self-loathing, Scott believes it’s the clergyman’s inner demons (he immediately offers her a gin-and-tonic in a can when she shows up to the priory to chat, for starters) that provided the connective tissue linking the two characters. “He’s somebody I definitely think who has a past and who is flawed and dark,” Scott says. “I think he’s got a relationship with alcohol and with sex that is not pure. He’s got a history of having a wildness to him, like Fleabag does. But he’s decided to channel it into something that has been helpful to him, and she has yet hasn’t done that. So they satisfy a need in each other — she’s looking for a certain degree of peace and he’s looking for a certain degree of soul connection, somebody who sees him.”

Scott’s character in Black Mirror has a more palpable pain out of the gate — it’s clear from his menacing stare and detached conversation style that this guy’s going through something — but it’s not until a tragicomic moment that Scott reveals just how broken he is. After his livery-car driver, Chris, kidnaps a suit-clad young man he believes to be an executive, only to learn he’s an intern, he goes, well, full Scott, launching into a fever-pitched rant about the befuddling democracy of tech-company culture, where the CEO can look like a lackey (see: Mark Zuckerberg and his hoodies) and a lowly intern can look like someone important. “How is anybody lookin’ in supposed to have a — SENSE of the, the f-fucking — HIERARCHY?!? Jesus CHRIST!” he sputters, arms flailing, eyes and forehead veins bulging. It’s genuinely funny. And all the more heartbreaking for it.

“I definitely saw a dark humor in that,” Scott says. “If you just play the earnestness of everything, it’s not reflective of the way life really is. And so a man who’s in a desperate situation, who’s very emotional and lonely, a devastated man, is still subject to absurdity in the same way Coco the Clown might be. I mean, life is ridiculous. Even in the most high-stakes, epic scenarios” — and here, for the only time in our conversation, a flash of that angsty on-screen persona comes through, Scott’s voice surging — “tiny little things…fuck your day up!”

If Scott has a wildness to him, it is not apparent over the phone. He is unremittingly warm and good-humored as we talk, despite the fact that it’s a Friday night in London, he’s just finished a long day of rehearsals for a play he’s in and he probably has at least 15 other things he’d rather be doing. He moved to London in his twenties, but now splits his time between that city and his hometown of Dublin, where he grew up the middle child, sandwiched between two sisters, to a dad who worked for a state-sponsored employment agency and an art teacher mom. He left there in no small part due to its regressive politics, a function of Ireland’s cultural obeisance to Catholicism. Growing up gay in Dublin in the Nineties, when the nation was still openly hostile to homosexuality (and attending, naturally, a Jesuit Catholic school), Scott amassed an understandable resentment toward the church. Which makes his star-making turn that happens to humanize the very institution that oppressed him as a young man somewhat ironic.

“Yeah, y’know, it’s funny, Phoebe and I talked an awful lot about religion, and it’s deep stuff, it goes very, very deep with me,” he says. “And it was really nice to have to put down my anger [to play this character]. Because I certainly had a degree of anger and rage towards the church. There’s so many things about the church that I love and respect, about kindness and community and all that, but being able to talk about the sexuality of people of the church — because the idea of talking about sex at all within the Catholic church in Ireland was taboo, but certainly the idea of talking abou the sexuality of a priest or a nun, which is the reason so much damage and abuse was allowed to take place — you’re like, Well what happens to that? Let’s talk about that! It’s such a mystery. What happens when you have sexual impulses? It was absolutely forbidden to be spoken about, like [they’re] some mythical, genital-less people. It feels cruel and strange and weird. I find that really the most insidious and dangerous thing about the Catholic church, and I really passionately believe that if [they] could be a little less rigid about priests and nuns being allowed to marry, I think there would be a lot more people interested in entering the church, y’know? I really do.”

Passion, of course, is not the same as rage. Yet it’s still hard not to feel as though you’re hearing an echo of the characters Scott is so deft at playing — fundamentally decent, vulnerable men who, at some point, break.

Asked why he’s so good at, to put it simply, freaking the fuck out, Scott laughs. “I’m not like that in real life!” he says. “I’m a very calm person. To sustain that amount of energy would take a lot.” It’s easy to believe, listening to that voice like a gentle back rub or a neat, late-night whiskey. Yet as he waxes about his philosophy on acting, a slightly different picture emerges.

“I like the idea of submerging something, and a lot of great characters are about what they’re concealing, and a lot of great drama is about the revelation of what they’re concealing,” Scott says. “And sometimes the more you submerge, the more explosive the reveal is. I think we all have a tremendous theatricality. Sometimes, as screen actors, we’re told that stillness and inscrutability is the key to acting, which to a certain degree I think is true. But we’re animals and we express ourselves in the most extraordinary ways. I don’t feel intimidated by that kind of expression. It’s the dramatic situations I enjoy.”

As if on cue, he extends an invitation to come see his play: “It’s a farce, a Noel Coward farce!” he says excitedly. “So I’m slamming doors and all that, from the sublime to the ridiculous.”

Or, to put it another way, it’s a great chance for Andrew Scott, polite, sweet, deeply introspective lapsed Catholic, to freak the fuck out.

Carol Vorderman almost spills out of bikini in jaw-dropping display