After 194 episodes, spanning nine seasons and two networks, Last Man Standing signed off Thursday with a decidedly understated finale. No one got married, got a new job or moved away. Instead, the episode saw everyone gather to mourn the loss of something near and dear to Mike’s heart: His 1956 Ford F-100, which was stolen and stripped for parts. But when everyone — including Kaitlyn Dever’s Eve, who FaceTimed in for the occasion — was asked to say a few words at the service, they didn’t eulogize the classic automobile — not if you listened carefully. Rather, each cast member tipped their hat to the show itself.

Below, showrunner Kevin Abbott proves himself an open book, revealing additional storylines that were scrapped at the very last minute, and the reason why Dever had to appear via tablet, despite being on set for the final taping.

TVLINE | This is the second time Last Man has ended — but the first time you’ve had the opportunity to end it on your terms. How much pressure did that put on the final episode?
It placed enormous pressure on it. I was also running this show at the end of Season 6 [at ABC]. That was the only year we didn’t think we were on the bubble, and we got cancelled. One of our main goals was really to make Tim feel that it was an appropriate end to this series that he had put so much of himself into, and dedicated so much [of his time], and felt so strongly about. I would have felt terrible if he walked away feeling incomplete.

We broke two other complete stories that we threw out, because we didn’t feel like they were the right tone. We finally settled on this one the week before [we shot it], but we were very good at writing quickly at that point… At the end of the day, I felt very good about what we did.

TVLINE | What can you tell me about the two other stories that got scrapped?
One was that Kyle leaves to join the priesthood. He leaves and Ed goes with him. Basically, it was a way to say goodbye [to the characters and the show]. You would say goodbye to Kyle and Ed, and have the other characters express how they were feeling [about] what was happening.

TVLINE | To be clear, it would have been Kyle, Mandy and Sarah moving away? And Ed just… tagging along?
Correct. There would have been a goodbye party. It would have been a separation. In the pilot, Kyle was a new employee [at Outdoor Man], so it would have felt correct, in terms of, you know, fulfilling that circle, completing the arc of the character. We would’ve made it as funny as we could, but there was going to be a bittersweet, melancholy underpinning to everything. That’s why we made [the finale] about the truck being stolen, and made the truck the metaphor for losing something that you care about and invested in for a long time. We could say goodbye to the truck, but we could keep that bittersweet, maudlin quality to one scene, as opposed to manifesting itself [throughout the episode]. 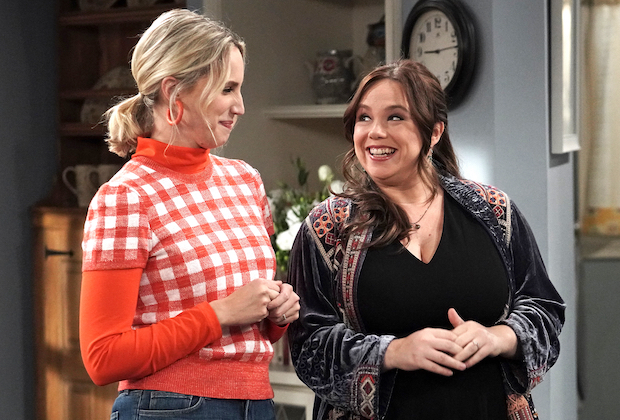 TVLINE | And what was the other story you had in mind for the finale?
The second idea was Kristin taking over Outdoor Man. It was an episode built around Ed saying Kristin needed to find her Ed — she needed to find that [business] partner that she could trust, and who would support her and encourage her good ideas, and be strong enough to tell the hard truths about her bad ideas. We had a very funny, interesting way in which we framed to have that be Mandy. And it felt very legitimate, by the way, because that role wasn’t about business expertise. It was about common sense… having a feel, you know, for what works and what doesn’t.

TVLINE | Why didn’t either of those stories feel like “the right tone”?
We didn’t go with either [of those ideas] because [they represented a change at Outdoor Man] that meant that the show, as everybody knew it, no longer existed.

TVLINE | You’ve worked on a number of long-running sitcoms, including The Golden Girls, the original Roseanne, and Reba. Did you look to any of those finales as inspiration?
It’s funny you ask that. If I did, I didn’t do it consciously. But Matt Barry, my number two [on Last Man], was also on Reba, and we ended that series as well [without actually] ending the show. That was just an episode about Reba finally admitting that she’s friends with Barbra Jean. Maybe that’s just my personal [preference]. You know, I loved Cheers. It was one of my favorite comedies. They did a great [finale], but I didn’t like that final melancholy moment. I wanted it to end on, while not necessarily a funny moment, because that’s really difficult to do unless you’re Newhart, I didn’t want it to end on a depressing moment. 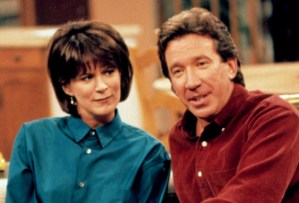 TVLINE | Since you mentioned Newhart, I have to ask: Did you ever consider having Tim Taylor wake up in bed with Jill after a nine-year slumber?
We talked about it. Yes, we did.

TVLINE | You’ve already hosted a number of Home Improvement reunions over the years — and if there was any show to borrow from, Newhart‘s a good one.
Yeah, especially because Bob Newhart and Tim Allen are [two of the] only [comedians] who have had two series that went longer than five seasons. I wouldn’t have felt bad for borrowing from that, because I think it would’ve been honoring Bob Newhart. And we did talk about it, and had we not done Tim Taylor meets Mike Baxter earlier in the season, we might’ve done something like that. But we also wanted to end on the [Outdoor Man vlog], since the vlog was the signature device of the series.

TVLINE | There’s a moment before Mike records his last vlog, where Ed is about to leave his office. He starts to walk out, then turns back towards Mike. He mumbles something under his breath, then walks out. What was that exactly? Had Ed finally run out of the things to say? Or did Hector Elizondo get choked up?
I love both of your interpretations. [In the script], he comes in and says, “I’ll see you tomorrow,” and then he just walks out. That was the way it was written. In rehearsal, Hector paused, turned around and went, “No,” and walked out. So, we just left that moment and said, “Do what you did.” Whatever he was thinking, it worked for me. I don’t need to know what it is, you know what I mean? It almost has more power being unspoken.

TVLINE | You had Kaitlyn Dever in the flesh a few weeks back. Did scheduling prevent her from appearing in person for the finale?
We could only have Kaitlyn via Zoom. Now, she did shoot that on [our] stage, but she had to be completely separate from the cast.

TVLINE | Was she was shooting something else at the time?
Yes, I believe it was Dear Evan Hansen, and we weren’t even certain we could get her until the week before. We had a couple scenarios — one where she would be with the group, and that would’ve been in the truck memorial scene — but she was not cleared [for them]. And the reason why she could shoot in front of the crew, but not the cast, is because the crew’s all masked. They shielded up, but the cast [could not], and there was not time to do the proper quarantine procedures. 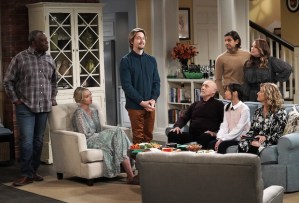 TVLINE | I like to wrap up every series finale interview with the same question: How do you want your show to be remembered?
I hope it’s remembered as one of those shows that people could watch with their entire family, and recognize themselves or their family members [in our characters]. Laugh about what’s funny, and maybe see the humor in some of the situations that aren’t funny. That’s how I’d like Last Man Standing to be remembered.

What did you think of the Last Man Standing series finale — and the Fox seasons overall? Weigh in via the following polls, then drop a comment with your full review.