Margot Robbie is the female lead in Quentin Tarantino’s upcoming “Once Upon a Time in Hollywood,” and the Oscar-nominated actress knows that comes with baggage. Tarantino has often been accused of mistreating women in his movies (from Kerry Washington’s Broomhilda in “Django Unchained” to Jennifer Jason Leigh’s Daisy in “The Hateful Eight”), and “Hollywood” is the director’s first release since Uma Thurman revealed in February 2018 that she nearly died in a car crash on the set of “Kill Bill.”

As Thurman told The New York Times, Tarantino insisted she be the one driving during the scene despite making it clear to the writer-director that she didn’t want to be behind the wheel. The road the production was using was not as smooth or straight as Tarantino promised it would be, and Thurman said the driver’s seat was not screwed down properly. Thurman lost control of the wheel and the car ended up crashing. The actress sustained injuries to her neck and knees. Thurman would go on to call the car a “deathbox” and the entire ordeal a “dehumanization to the point of death.”

As Robbie steps into the spotlight as Tarantino’s new leading lady, she’s unsurprisingly being asked to weigh in on Tarantino’s complicated history. Vogue sat down with the actress for its July cover story and brought up Thurman’s car crash. Robbie said she was reassured about working with Tarantino not only because Thurman forgave him but also because the filmmaker helped Thurman get the footage of the crash from Harvey Weinstein after a long battle for possession. Tarantino told The Times the “Kill Bill” crash is “one of the biggest regrets of my life.”

“The thought definitely crossed my mind,” Robbie said of signing up to work with Tarantino, “like, will people view this decision as conflicting with what I’m doing on the producing side?”

Robbie has made it a mission through her production banner, LuckyChap, to bolster female representation in front of and behind the camera. Some moviegoers have wondered how the actress can champion female narratives on the big screen and then go work with someone like Tarantino.

“It was my lifelong dream [to work with Tarantino], and I got to do it, and it makes me sad if people might hold that against me despite everything else I’m doing,” the actress said.

Robbie continued, “I don’t know how to say what I feel about it, because I’m so grateful to be in a position of power and to have more creative control [as a producer] when that is embraced and encouraged now. At the same time, I grew up adoring movies that were the result of the previous version of Hollywood, and aspiring to be a part of it, so to have those dreams come true also feels incredibly satisfying. I don’t know. Maybe I’m having my cake and eating it too.” 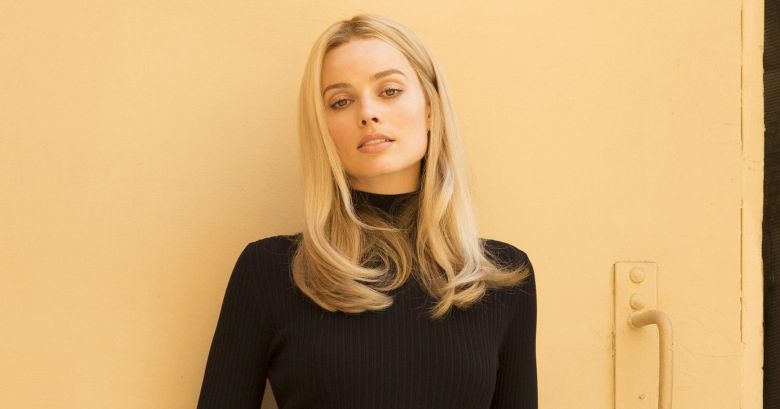 Robbie loved Tarantino so much that she wrote him a letter shortly after production on “I, Tonya” wrapped. The letter said, “I adore your films, and I would love to work with you in some capacity. Or any capacity.”

As fate would have it, Tarantino got the latter just as he was finishing the “Hollywood” script. Friends were already telling him that Robbie would be perfect for the role of Sharon Tate just as the letter arrived. The two met and Tarantino cast Robbie because “she looks like Sharon Tate and she can convey Sharon’s innocence and purity—those qualities are integral to the story.”

“Quentin told me, ‘You will never have more fun on a movie set.’ And he was right,” Robbie told Vogue. “I had the greatest experience of my life. There are some aspects of old Hollywood that are really wonderful and important and should be carried over. Do you erase history because there were some bad parts? Maybe it’s important for us at this juncture to acknowledge the good parts as well.”