Luke Davies has known plenty of lows in his life, but right now the Sydney-raised, LA-based writer is in what he describes as "absolutely a sweet spot".

His miniseries Catch-22 – starring, produced and directed (in part) by George Clooney – has just been released. His feature Angel of Mine will screen at the Melbourne International Film Festival in August. His adaptation of Paulette Jiles' exquisite novel News of the World is due to start shooting in September, with Tom Hanks in the lead and Paul Greengrass directing.

He's written the script for Sherpa filmmaker Jennifer Peedom's Tenzing, about the 1953 assault on Everest by Edmund Hillary and Tenzing Norgay. And he's just about to start work on an adaptation of The Most Dangerous Man in America, which is slated to star Woody Harrelson as an on-the-run Timothy Leary in the early 1970s.

"Yes, it's a nice sweet spot," the 57-year-old repeats. "But this town is weird and crazy and ageist and intense. I don't take it for granted. I'm just enjoying the nice things at the moment, and I'm very focused. I've become very good at being a methodical, orderly, hard worker."

Davies – who wrote the novel Candy and its screen adaptation based on his own story of drug addiction in the 1980s – has lived in Los Angeles since 2007, which is long enough to have experienced a lifetime's worth of promises and disappointments. Not to mention grinding poverty.

"I was so poor for so many years," he says. "I couldn't get an agent, I couldn't get a meeting. It was really stressful. There was this period around 2010 when for nine months in a row I had to say to my housemate, Alex O'Loughlin [the Australian star of TV's Hawaii Five-0], "I can't pay my rent again'. And every month he said, 'It's cool, it's cool, I've got it'."

Things began looking up for Davies when he won the $80,000 Prime Minister’s Literary Award for Interferon Psalms, a book of poetry, in 2012. He paid his back rent, paid off the credit cards he'd been living off, and enjoyed the first bit of breathing room he'd had in years. 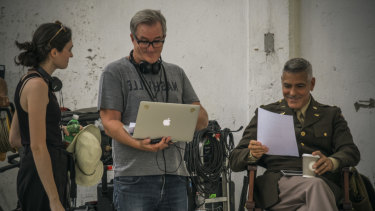 Then came Lion. His adaptation of Saroo Brierly's story about finding his birth mother in India thanks to Google Earth sparked a bidding war that ended with Harvey Weinstein reportedly paying $US12 million for the rights – based purely on the screenplay – in 2014.

"And then after all these years of not being able to get a meeting with even a junior exec, suddenly all the heads of the studios who had missed out in the bidding war said they wanted to meet this guy who made them cry. That's when things began to change."

When the film itself came out a couple of years later, there was a second wave. He'd jumped up and down with excitement upon reading News of the World, immediately sensing its screen potential. A month later, Tom Hanks and his production partners saw Lion, thought the same thing, and said, "Let's talk to this guy".

But in Hollywood, even for someone with runs on the board, nothing is real until it's real. So it is that Catch-22 almost slipped through his fingers. 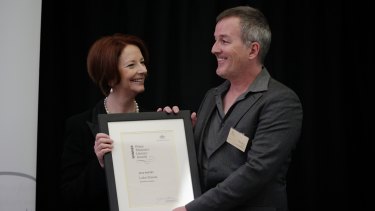 Winning the $80,000 Prime Minister’s Literary Award for poetry in 2012 was a lifeline for Davies.Credit:Alex Ellinghausen

The series was developed by him and David Michôd, the writer-director of Animal Kingdom and another member of the "Aussie sharehouse in Koreatown" that Davies calls home (the fourth member is Mirrah Foulkes, partner of Michôd and the director of Judy & Punch, which screens at the Sydney Film Festival next week).

Four weeks after they floated the idea to Scottish producer Richard Brown (True Detective) over coffee on their front porch, they had a deal to develop it as a series – with Davies writing and Michôd to direct all six episodes. But after many months of "agonising" development, Michôd dropped out when he realised he couldn't possibly do the series and his film The King.

"Which was super annoying for me for 30 seconds," admits Davies. "It was like, 'Our show just fell apart'. He's my very dear friend, but it was like, 'Really?'"

But "miraculously, somehow" the script had made its way to George Clooney and his producing partner Grant Heslov, and two weeks later "our show had very definitely not fallen apart". 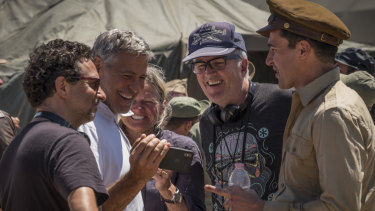 When George Clooney is onboard your project, Davies discovered, doors really do open. All along, Paramount had said no to shooting in Italy – where much of the story is set – because it was too expensive. But Clooney has a house at Lake Como, "and of course, three months later, we're shooting in Italy. I don't want to say it's causal, but…"

So, did George commute to work? "He did, yeah," laughs Davies. "Sometimes he would fly back to Lake Como on Friday night after shoots, and fly in again on Monday morning."

Now that's what you call a sweet spot.