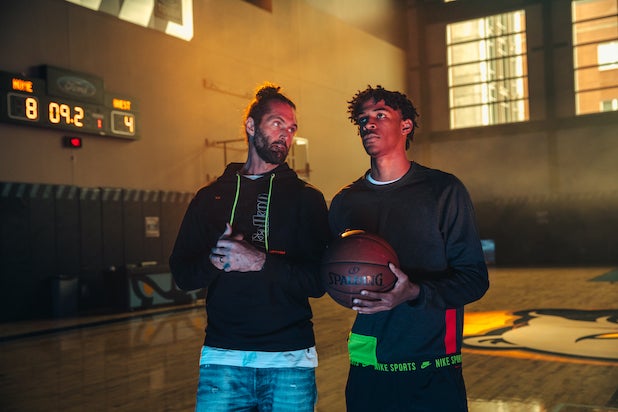 Ja Morant, the NBA’s reigning rookie of the year and a rising star with the Memphis Grizzlies, is the subject of a new documentary series, “Promiseland,” that will focus on up and coming rookie athletes.

Dexton Deboree, who directed the feature “Unbanned: The Legend of AJ1,” directs the first season of “Promiseland” that looks at Morant’s rise from high school prospect to college standout at Murray State to finally the top tier of the NBA.

“Promiseland” is in post-production now after following Ja Morant from the start of the 2019-20 NBA season, and filming continued up through the NBA playoff bubble during the pandemic.

Future seasons of the show will follow rookie athletes across other sports, as well as other NBA stars. The filmmakers are currently shopping the series to buyers.

The series is a joint project from DLP Media Group, which produced the “30 for 30” film “Lance” and “Rodman: For Better or Worse,” along with Deboree’s Falkon Entertainment, RTG Features and Interscope Films.

“With the global pandemic and civil unrest in America acting as a backdrop for this season, the series went far beyond that of simply a basketball story, revealing a side of Ja we could have never anticipated,” “Promiseland” creator Deboree said in a statement. “We quite literally witness him become a man, find his voice amid the social landscape, and powerfully step into the shoes of a shining role model for both his community and for his generation. We went into this knowing Ja was something special, but emerge now believing he’s truly one of a kind.”

“It was incredibly important to find a way to keep cameras rolling through everything,” Mike Hughes, founder and CEO of DLP Media Group, said in a statement. “You only get one chance to capture a moment like this, and Ja became an incredible lens to view the changing world.”

“The culture of music and sports have always been intertwined,” Anthony Seyler, EVP of Interscope Films says in a statement. “‘Promiseland’ has been an incredible opportunity for our artists to add tremendous texture to Ja’s story.” The series features a curated soundtrack from Interscope Records, an original score from Steve “Swiff D” Thornton, and guest appearances by NBA great Carmelo Anthony, WNBA MVP A’ja Wilson, Memphis Grizzlies head coach Taylor Jenkins, Grizzlies stars Jaren Jackson Jr. and Brandon Clarke, and hot young hip-hop talent Moneybagg Yo, among others.

“This series shines a deeply personal light on dreams unfolding and being realized in real-time,” Aron Phillips, COO of RTG Features, said in a statement. “It’s a rite of passage moment with tremendous stakes.”

“‘Promiseland’ is much more than a basketball story,” Deboree added. “It’s a human story, with a main character in Ja that we can all be inspired by as we watch him grow through his struggles and successes.”