How do we live with some of the shit that we’ve been forced to watch on a daily basis? Why are we so eager to immortalize the worst images that our world is capable of producing, and what kind of awful power do we lend such tragedies by sanctifying them into spectacles that can play out over and over again?

While Jordan Peele has fast become one of the most relevant and profitable of modern American filmmakers, “Nope” is the first time that he’s been afforded a budget fit for a true blockbuster spectacle, and that’s exactly what he’s created with it. But if this smart, muscular, and massively entertaining flying saucer freak-out is such an old school delight that it starts with a shout-out to early cinema pioneer Eadweard Muybridge (before paying homage to more direct influences like “Close Encounters of the Third Kind”), it’s also a thoroughly modern popcorn movie for and about viewers who’ve been inundated with — and addicted to — 21st century visions of real-life terror.

The only sci-fi movie that might scare and delight Guy Debord and Ed Wood to the same degree, “Nope” offers a giddy throwback to the days of little green men and hubcap U.F.O.s that hopes to revitalize those classic tropes for audiences who’ve seen too much bloodshed on their own screens to believe in Hollywood’s “bad miracles.” It’s a tractor beam of a movie pointed at people who’ve watched 9/11 happen so many times on network TV that it’s lost any literal meaning; who’ve scrolled past body cam snuff films in between Dril tweets; who’ve become accustomed to rubbernecking at American life from inside the wreckage.

Less acutely metaphorical than “Us” or “Get Out” and yet just as compelled by the sinister forces that hide in plain sight — along with the double-edged thrill of actually seeing them — “Nope” satisfies our morbid appetite for new horrors better than any multiplex offering in years, but only so that it can feed on our fatal inability to look away from them. 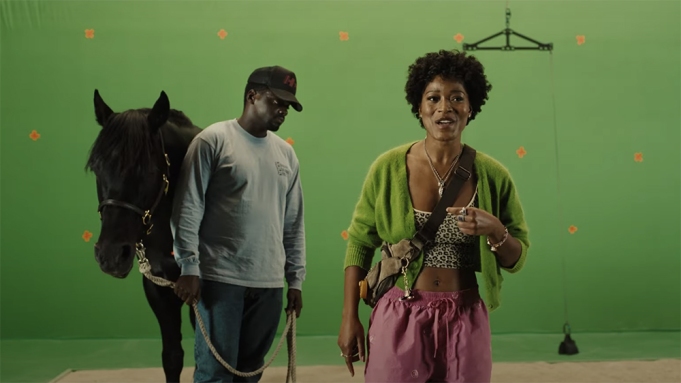 Having said that, “Nope” is also the least confrontational movie that Peele has made so far, its social criticism diffused to the brink of abstraction and joyfully couched in the kind of nervous laughter suggested by its title (which somehow gets funnier every time one of the characters says it aloud). Despite a few moments of deliberately conspiratorial handholding — including a winky scene in which someone announces that “we’re being surveilled by an alien species I call ‘The Viewer’” — it takes a minute to connect the dots between the various things that Peele is doing here.

There’s a good reason why “Nope” opens on the set of a 1998 sitcom minutes after the show’s lead actor, a chimpanzee named Gordy, has gone bananas and beaten several of his co-stars to death, but the rationale is never as explicit as the one undergirding the “Hands Across America” subplot from “Us.”

By the same token, it’s easy to figure out why grief-stricken animal wrangler OJ Haywood (Daniel Kaluuya) might want to sell the Agua Dulce ranch where his family has raised Hollywood picture horses since the movies were invented — in the present-day portion of the film’s prologue, a nickel rains down from the sky with such velocity that it kills OJ’s dad (Keith David), cutting a hole clean through his eyeball — but Peele doesn’t spell out why OJ might want to keep it. At this rate, it’s unclear if he even could keep it; OJ is too sad to do the job right, leaving his super-extroverted little sister Emerald (Keke Palmer) to keep Haywood Hollywood Horses from being put out to pasture. The only thing that’s writ large from the get-go is the relationship between one era of spectacle and another, which Emerald articulates like a family motto in a rapid-fire monologue about the Black jockey who Muybridge photographed to create the very first assembly of motion pictures. Most people forgot his name in the shadow of that immortal shoot (and it would take Hollywood another 100 years to come back to the idea of putting a Black man on a horse), but Emerald and OJ remember it well: He was a Haywood too. Alas, even the most remarkable history isn’t enough to guarantee a future in show business, and that’s doubly true for animal wranglers in an age where studios would sooner animate whatever they might not be able to tame (it’s worth noting that Gordy, like many of the animals you see in the movies these days, is 100 percent CGI).

It’s only when OJ spots a silver disc shimmering through the sky above his ranch — an eerily magical stretch of air that Crayola might call “Day-for-Night Periwinkle” — that he finds his feet again. If no one wants to shoot real horses anymore, he’ll show the world something that it’s never seen before. Something wild. Something that no one else could ever hope to break. And so begins a UFO story that’s less interested in killing the alien than it is in capturing it on camera, even when the desire to see it might be strong enough to devour a city whole.

The process by which OJ and his more reluctant sister become amateur UFO hunters can be a clumsy one — the Haywoods team up with the tetchy, half-dumb Fry’s Electronics clerk (Brandon Perea) who sells them their surveillance camera, his character dragging weight until Peele finds the right use for him in the third act — but “Nope” does a quietly brilliant job of herding its disparate subplots in the right direction.

Instrumental to that success is the Haywood’s neighbor and business rival Ricky “Jupe” Park (the great Steven Yeun, all smarmy kindness and smothered trauma), a former actor who survived Gordy’s rage as a child only to profit from people’s morbid curiosity about it as an adult. Under his calm smile and cowboy veneer, we get the sense that Jupe is trying to assert some kind of control over the worst thing he was ever forced to watch; that he eagerly recounts the “SNL” sketch about the attack (for example) in the hopes that staring his demons in the face might blur his vision of it, soften its edges, and turn it into something he can live with.

Does that have anything to do with all of the horses Jupe’s been trying to buy lately? Time will tell, but wrangling nightmares into spectacles is dangerous business, especially when people can’t bring themselves to look away.

With great patience and tremendous craft, Peele steers these characters (and a handful of others) from one masterful set piece to the next, all of them flecked with popcorn-spilling jolts but more fundamentally driven by a profound sense of big-screen, body-rattling awe. On some level, “Nope” is Peele’s smallest film so far; almost the entire story takes place on the Haywood ranch and its surrounding areas. At the same time, however, it also feels like his largest. Sometimes literally: Hoyte van Hoytema’s 65mm compositions lend the carnage an intergalactic scale that makes even the film’s most familiar tropes feel bracingly new, and inspire a degree of holy terror that allows the grand finale to alternate between heart-in-your-throat horror and fistpump-worthy “Akira” references as cinematography assumes a hands-on roll in the action (Peele keeps the film’s self-reflexive streak to a low boil, but cranks it up to a delirious high in the dying minutes).

It doesn’t hurt that Peele’s latest boasts some of the most inspired alien design since H.R. Giger left his mark on the genre, or that Kaluuya’s eyes remain some of Hollywood’s most special effects, as “Nope” gets almost as much mileage from their weariness as “Get Out” squeezed from their clarity. It’s through them that “Nope” searches for a new way of seeing, returns the Haywoods to their rightful place in film history, and creates the rare Hollywood spectacle that doesn’t leave us looking for more.

Universal Pictures will release “Nope” in theaters on Friday, July 22.