Ron Howard’s “Pavarotti” is a warm but distant (and hagiographic) documentary about the most lucrative tenor who’s ever lived. It opens with its boisterous namesake belting out an aria in the middle of the Amazon, and then spends the rest of its running time showing us how the humble son of an Italian baker managed to fulfill his dream of bringing opera to the entire world. That’s a hell of a story — more than compelling enough to sustain a well-edited womb-to-tomb portrait that moves along a clean upward trajectory.

But while this film provides an open invitation for people to rediscover Pavarotti’s genius, the man behind the Maestro remains something of a mystery. If the best moments of Howard’s doc suggest that Pavarotti was a pure soul whose generosity resonated as strongly as his vibrato, the worst stretches leave the flimsy impression that this larger-than-life figure was just an empty vessel for the 20th century’s fullest voice.

Made with the full support and participation of Pavarotti’s family, Howard’s film tells the surface-level story of a charismatic man who was born with a gift, and devoted his life to sharing it with as many people as possible. And thanks to a wealth of archival material — including family photographs, performance recordings, and choice video interviews — Howard is able to make it seem as though his subject were born with no other purpose.

There’s an entrancing sense of inevitability to how “Pavarotti” sketches the singer’s formative years in just a few quick strokes, as if Pavarotti was just some poor kid from Modena, Italy who inherited his father’s business. And, in a way, perhaps he was. One quote, lifted from a mid-career television piece, speaks volumes: “My father was a baker and a tenor,” Pavarotti says, giving all three nouns in that sentence equal weight. That’s where Howard’s refined storytelling instincts kick in, as he recognizes how there were really only two relevant moments in his subject’s young life: When Pavarotti discovered that he could hit a high C, and when other people discovered that Pavarotti could hit a high C.

And just like that — before opera neophytes and non-fans have time to remember how little they think they care — the film confronts us with a scratchy recording of the Maestro’s first-ever performance of “La Bohème,” and the course of history takes hold from there.

Bottomless yet filled with feeling, Pavarotti’s voice is most defined by the immediacy of its power, and Howard is smart not to awe at the sound of it; hearing that music warble out of a human being is all that it takes to appreciate why doors opened and the earth moved every time Pavarotti opened his mouth. The singer insists that the voice is like a jealous lover that’s impossible to control, but the notes always seem to do his bidding (despite the stage fright that inspired him to wave an iconic white handkerchief around during his recitals), and brief asides about how opera singers master their air flows only make it easier to appreciate Pavarotti’s genius). The talent was just there, and whatever time the Maestro spent training is brushed under the rug. Someone insists that Pavarotti’s voice could be a heavy burden, but it seems to carry him as often as he carried it.

Or perhaps, to use a different metaphor, they both had one hand on the wheel. One of Howard’s talking heads (either his first wife or one of their three daughters) insists that Pavarotti “was not someone who planned things,” and the documentary bears that out, as it careens from one great success to another before inviting the singer’s managers and bookers to explain how Pavarotti eventually broke down the barriers between opera and mass culture. 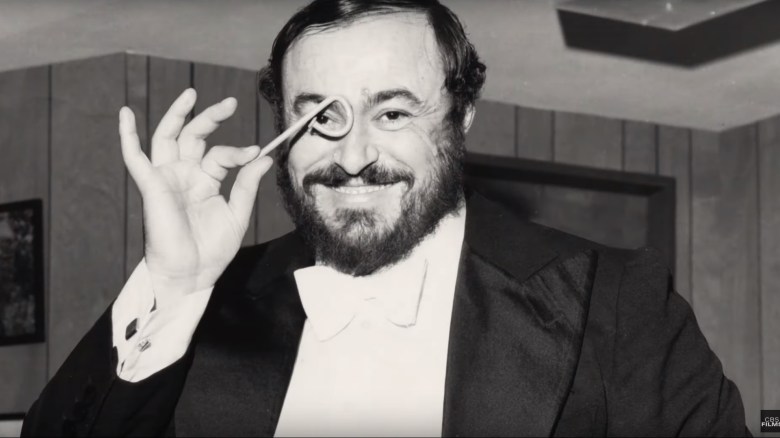 But while Howard makes clear that Pavarotti received plenty of criticism for “betraying” his background with his wildly popular crossover work, the man himself is painted as the only victim of his success. Although Howard interviews soprano Madelyn Renee, and even includes a video clip of the first meeting between the Maestro and his mistress, “Pavarotti” makes it seem as though the opera star was an innocent bystander in their affair. And while Howard offers a passage in which Pavarotti puts his career on hold to care for his daughter during a terrible illness, the director carefully dances around the singer’s controversial romance with his second wife; we see why a divorce was scandalous for one of the world’s most famous Catholics, but the film elides how the fallout landed on Pavarotti’s family.

The harder that Howard leans into his subject’s charity work in the ’90s — with extra attention being paid to his very special friendship Princess Diana — the more we’re left to wonder if his aggressive fight against global suffering was meant to deflect from the hurt he caused at home. At one point, Bono tells a story about how persuasive and unrelenting Pavarotti could be, referring to him as “one of the great emotional arm-wrestlers of all time,” and the edge in his voice is the film’s only clear glimpse of a man who may have needed to be liked more than he needed to be loved.

Pavarotti was blessed with a profoundly real gift, but he offered it to people with a huckster’s ability to make his marks feel like friends for as long as he gave them his attention; the spotlight followed him everywhere he went, and it was bright enough to blind those closest to him. “Pavarotti,” much like its subject, is fun and full of life for as long as it lasts, but as soon as it’s over you realize how little of it you got to see. Howard’s doc offers a crystal clear record of how Pavarotti brought opera to the world, but it leaves us guessing at what he might have left behind.

CBS Films will release “Pavarotti” in theaters on June 7.