Clare Crawley might have been a trailblazer when she ended her season of The Bachelorette early to be with Dale Moss, but as it turns out, Peter Weber could have actually been the first person in Bachelor history to leave their leading role…to be with Hannah Brown—yes really! During a recent appearance on Us Weekly’s Here for the Right Reasons podcast, Peter revealed that Hannah showing up on night one seriously made him reconsider, well, everything.

“I remember the first time that she showed up on my season was the first night with all the limos,” Peter recalled. “That limo showed up and it just sat there for, like, 15-20 minutes. No one got out. And I’m just standing there. No one’s coming up to me — obviously, they don’t show this part. But I’m just, like, there waiting, like, ‘OK, when’s the door gonna open? What kind of surprise is it gonna be?’ No producers are coming up to me or anything.” 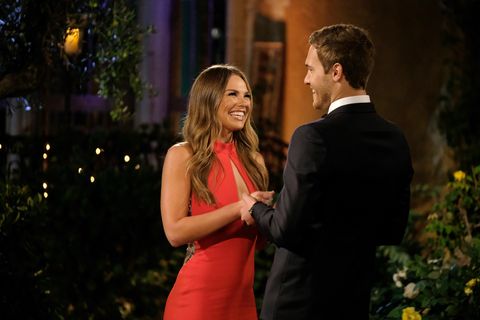 Naturally, Peter was in serious shock. “At first I was like, ‘There’s no way that’s Hannah, like, there’s no way.’ [I thought] it was a look-alike. I thought it was just this gorgeous girl. and then I realized her smile. That bright smile, like, that’s Hannah Brown, holy shit,” he told Us.

After their emotional reunion, Peter explained that he ended up second guessing his decision to go through with the rest of his season to have a real shot with Hannah. Producers didn’t show this on TV, of course, but Peter explained what was going through his mind at the time in perfect detail.

“I was an idiot, producers probably hated me, but I literally, like, I think they edited this part out, I was like, ‘I’m gonna leave the show, like, if you want to, if you want to give this a shot, I’ll leave right now,’” Peter said. “And she’s like, ‘You can’t do that, Peter, you’re the Bachelor, you signed a contract.’ I’m like, ‘No, like, I’ll do it. What are they gonna do to me?’ I don’t know what I was thinking that day. I was very confused.”

The rest, as they say, is history—Peter couldn’t make up his mind on if he wanted to be with Hannah Ann or Madison Prewett at the end of the season, didn’t end up with either girls, and fell for Kelley Flanagan…who he’s no longer in a relationship with either. That being said…let’s hope Peter finds his lucky girl someday!

You love reading about The Bachelor. So do we! Let’s overanalyze them together.