Piers Morgan snapped at Labour frontbencher Emily Thornberry as the pair clashed over the difference between Barack Obama’s immigration policy and Donald Trump’s. Mrs Thornberry, like many other Labour politicians, including leader Jeremy Corbyn, have objected to the US President’s state visit and strongly criticised Mr Trump over his US policies.  Mr Morgan claimed that despite her objections to Mr Trump, Mr Obama “broke records” for deporting illegal immigrants and deported an estimated three million people.

The GMB host began by saying: “If you are going to be fair-minded about this, there were children being separated under Obama’s immigration policy.

“And the reason the number matters is because Barack Obama broke all records by any US president for deporting illegal immigrants.

“Again you are the shadow foreign secretary, you are very incensed by Donald Trump’s policy on immigration.

“Do you have any idea on how many people Barack Obama deported, it is a stated fact, hazard a guess?” 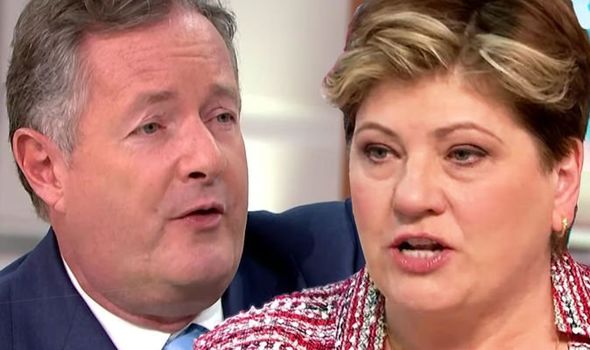 The Labour frontbencher replied: “I have told you I don’t know.

“I’ll tell you what if it was just his immigration policy that would be one thing but it isn’t, I cited it in a long list.

“I’ll give you all the other things that I object to.”

The GMB host cut her off and the pair began speaking over one another as the engagement became more heated.

Mr Morgan said: “Alright let me tell you how many it was Emily.

“Emily it was three million people.

“Emily, I get it, but you can’t just keep talking.”

The shadow foreign secretary said she could continue talking as Mr Morgan argued that the Labour politician simply didn’t want to hear the number of Obama’s immigration policy.

It comes as President Donald Trump travelled to the UK on Monday for an official three-day state visit.

On Monday, Labour Party leader Mr Corbyn, tweeted: “Tomorrow’s protest against Donald Trump’s state visit is an opportunity to stand in solidarity with those he’s attacked in America, around the world and in our own country – including, just this morning, @SadiqKhan.”