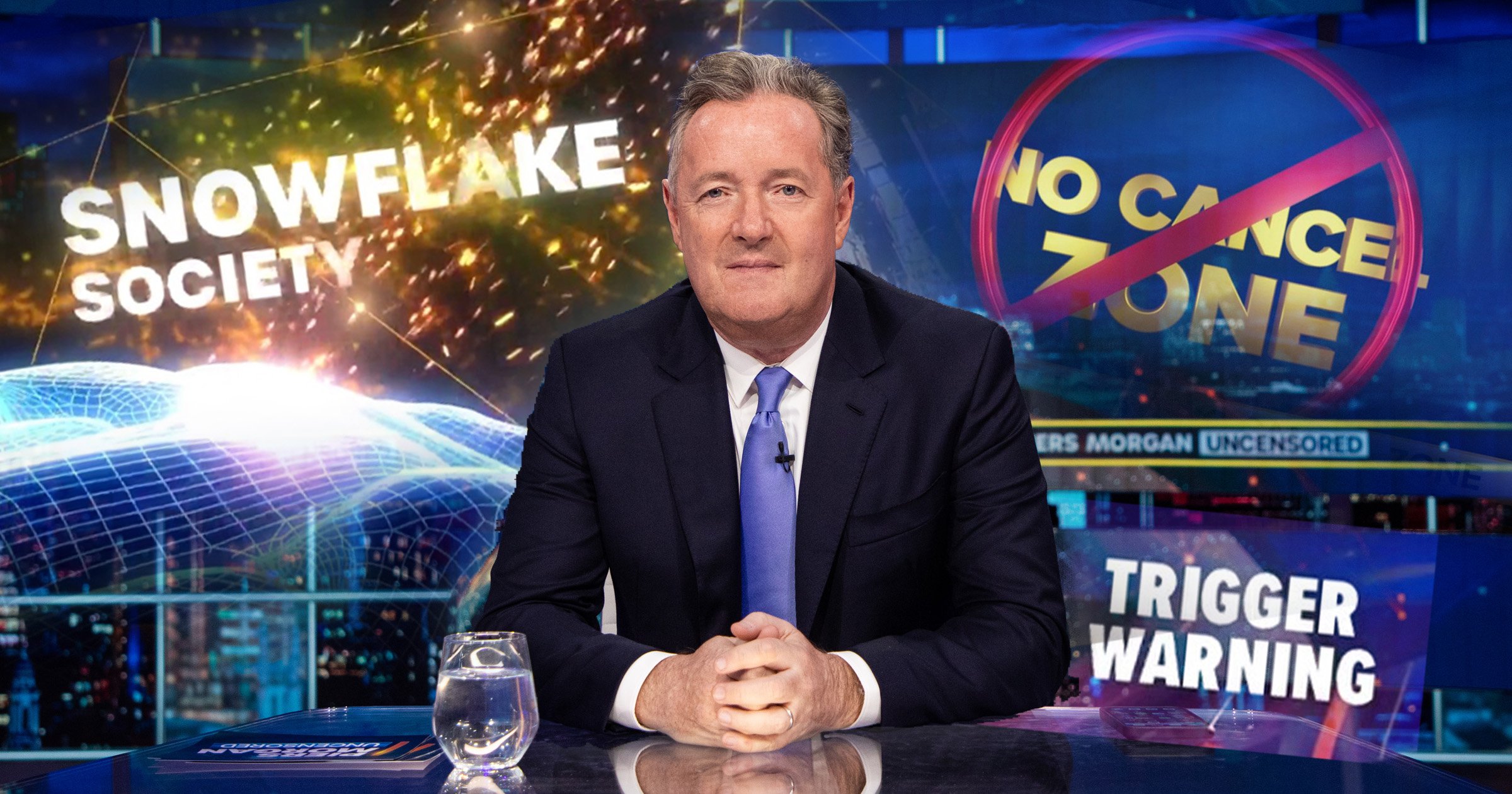 Let’s face it – we all knew what we were in for when Piers Morgan launched a new show on TalkTV titled Piers Morgan Uncensored… not that he has ever had his views censored, one could argue.

The programme aired for the first time on Monday evening, effectively becoming a televised manifestation of the presenter’s Twitter account, over a year since his acrimonious exit from Good Morning Britain.

After the words ‘cancel culture’, ‘snowflake society’, ‘censorship’ and ‘identity politics’ flashed on the screen, Piers began his first spiel of the night, likening himself to the first democratically-elected president of South Africa as he stated: ‘As Nelson Mandela might have said, it’s been a long walk to freedom of speech.’

Because of course, who wouldn’t compare the former GMB’s host plight to score a new platform on TV to the extraordinary journey faced by the anti-apartheid revolutionary leader? (Please note the sarcasm).

The broadcaster embarked on a long-winded rant to mark the start of his utterly predictable show, vowing that no one would be getting cancelled on Piers Morgan Uncensored and that they would strive to ‘enjoy themselves’.

However, he then contradicted himself almost immediately, quoting his late friend Shane Warne by telling the ‘fun police’ to ‘get stuffed’ before bringing up the Duke and Duchess of Sussex… as he has become known for doing on a regular basis.

His latest attack launched at Meghan Markle and Prince Harry came in his introduction, as he dubbed the duchess ‘Princess Pinocchio’ (a tired taunt) and called out ‘hypocritical’ celebrities before addressing the Queen’s grandson directly.

He then showed snippets of footage from his tumultuous interview with Donald Trump, when the former US President appeared to insinuate that he might run for office yet again in 2024.

While watching the first episode of Piers Morgan Uncensored, I personally couldn’t help but draw parallels to the anticlimactic launch of GB News last summer, which failed to make a dent in the ratings after former chair Andrew Neil similarly promised to ‘expose cancel culture as threat to free speech’.

Of course, there will always be viewers who will tune in to find out whether Piers has anything newsworthy or scandalous to say about current affairs… but will that be enough to give Piers Morgan Uncensored the attention the host so sorely craves?

The title is, of course, ironic given Sharon’s exit from the show of the same name over in the US, after she became embroiled in a row over racism with her co-star Sheryl Underwood last year.

The former X Factor judge was also joined by commentators JJ Anisiobi and Esther Krakue and actor Nicola Thorp to discuss the latest headlines of the day, from Elon Musk’s multi-billion pound Twitter takeover to the misogyny experienced by Labour politician Angela Rayner.

Sharon has proven over the years how charismatic she can be on TV… but while she bounced off her co-presenters, it didn’t help that she didn’t appear to have done thorough research on the subjects being discussed before appearing live on-air.

After checking that she was saying Angela Rayner’s first name correctly, she expressed her astonishment over learning the deputy leader of the opposition is a grandmother.

Later on, the panel were discussing controversial remarks previously made by heavyweight champion Tyson Fury, with Sharon describing him as an ‘interesting character’ and saying: ‘I don’t agree with what he said, but the thing is with everybody, if you don’t like him or you don’t agree with him, switch him off!’

However, she appeared to feel far more strongly opposed to Tyson when Nicola brought up antisemitic comments he has made in the past, given the TV personality’s father was Jewish.

‘Antisemitic! Then I do not like him! That’s it,’ she stated, before adding: ‘He seems like a great character, he really does, but if I’d have known he said something antisemitic that would’ve been it.’

In another bizarre turn of events, Sharon couldn’t help but rave over how ‘attractive’ she found Vladimir Putin in the infamous photos of him from 2009 when he was pictured riding a horse topless.

Not the direction we expected the show to go, as the Russian president continues to wage war and cause destruction and devastation in Ukraine.

The launch of TalkTV was definitely more smooth-sailing than GB News, avoiding the disruption of technical difficulties that plagued the latter last summer.

However, the continued references to ‘wokeness’, ‘cancel culture’ and ‘snowflakes’ made Piers Morgan Uncensored feel tedious and far less current than it believes itself to be.

So does the programme offer anything vaguely innovative or groundbreaking that we haven’t already heard over and over, either on TV or social media? We have our opinions, but that will ultimately be up to viewers to decide.