After Rebekah Vardy’s remarks about Peter Andre’s ‘chipolata penis’ were dug up in court, the tables turned on her during last night’s Have I Got News For You.

Vardy has been going head to head with Coleen Rooney as one of the most anticipated trials of the year as the curious case of Wagatha Christie finally saw the two WAGs in court.

I’m A Celebrity star Vardy, 40, is suing Rooney, 36, for libel over accusations she leaked stories to the press, while Rooney is defending her now infamous post on Instagram, which revealed she had carried out a ‘sting operation’ and accused Vardy of giving ‘false stories’ about her private life to the press.

Naturally, after two and a half years of suspense, all eyes have been on the wild revelations coming out from the trial, and there’s been plenty of tears.

But the moment which really caused a stir was Vardy’s historic remarks in an article about the Andre’s performance in the bedroom, which she’s now confirmed was false and shared her deep regret over.

It’s been one of the hottest topics of the week, so obviously came up on this week’s edition of Have I Got News For You, with comedian Chris McCausland getting the entire studio and fellow guests – Steph McGovern, Anna Maxwell Martin, and team captain Paul Merton and Ian Hislop – in stitches. 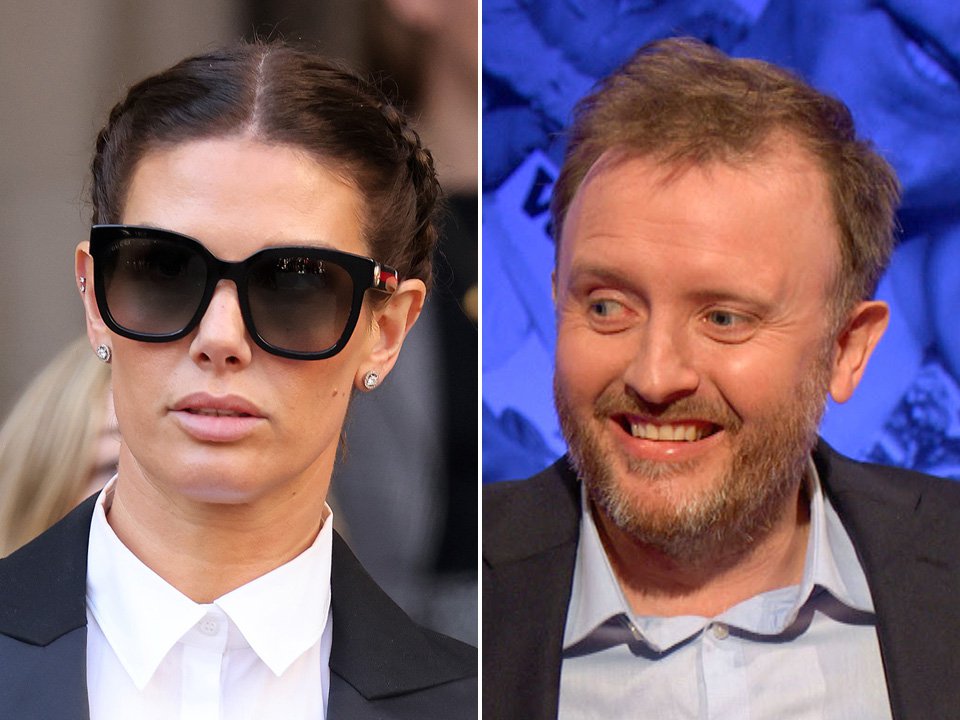 ‘I know Peter Andre and he was telling me Rebekah Vardy’s got a humungous vagina,’ he joked before his co-stars erupted in belly laughs.

Taking to the stand this week, Vardy said she did not say many things presented in the article published.

She told the court: ‘There’s a lot of things in there that didn’t come out of my mouth that were misrepresented in the circumstances around that article I’m deeply sorry for.’

The WAG also said she sent ‘personal messages’ to Andre and his partner since it was published.

Andre, 49, shared a video in response to the article being dug up again, saying he’d been the butt of jokes for 15 years now.

‘I kept quiet didn’t say anything, and I let everyone have their laugh and say what they wanted to say. Yes, now she’s gone to court and admitted the story was made up and did that because her ex-husband forced her to, and it was all made up,’ he shared on Instagram, referring to how Vardy said she was ‘forced into a situation’ by her ex in talking to the press.

Andre continued in his video: ‘Put that all aside and think how it feels if a man or if I had said this about her anatomy or if a man said something about a woman’s anatomy, made up something whatever, you can use your imagination about saying something very unflattering, there would be outrage. But because it’s been said about me, it’s been the butt of all jokes, I’ve taken it for 15 years.’

The singer went on: ‘I know some of you are gonna go, ‘get over it, don’t say anything.’ You gotta understand when it goes on and on and being brought up, and even worse it’s been brought up in the High Court and the lawyer is bringing it up having a go at her for bringing up something in News Of The World that went to four million people and then it’s brought up in court that goes to a lot more than four million people, it’s brought up again, and the only one that sits there and takes hit after hit about it is me.’

He added that he’s ‘been laughing about it for a while’ but wants people to consider ‘how it would feel if it was the other way round.’

The trial is still ongoing and expected to last a total of seven days.

Have I Got News For You airs Fridays at 9pm on BBC One.