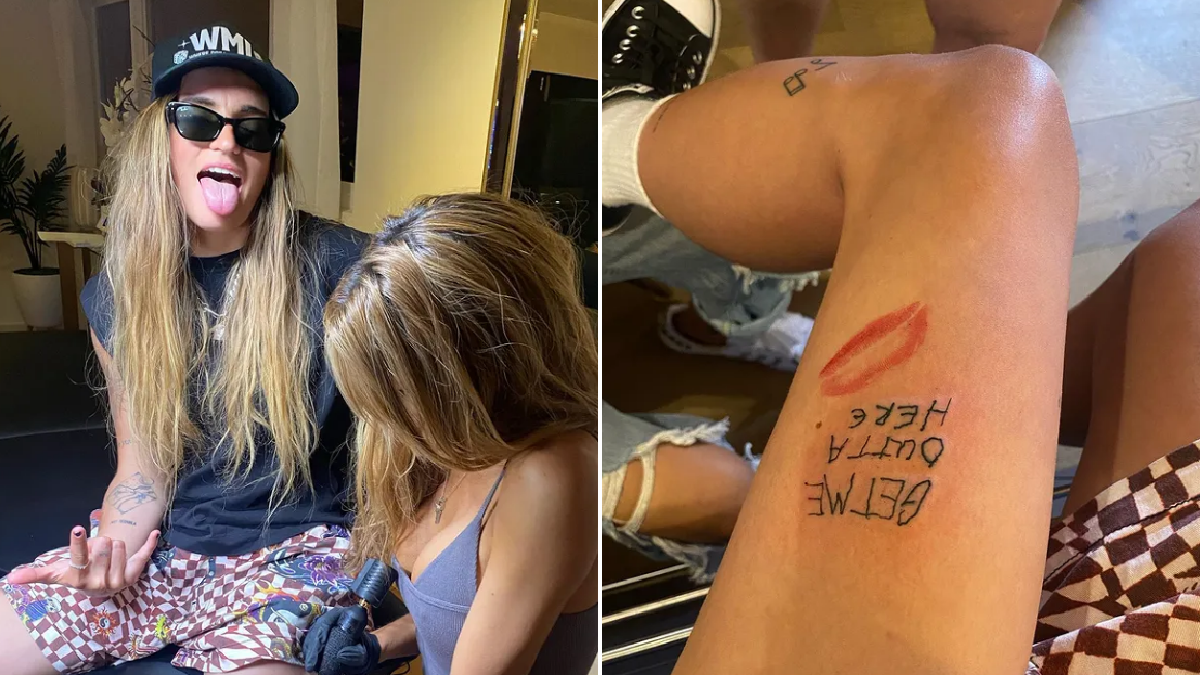 Selling Sunset’s Chrishell Stause has taken things to the next level with her new non-binary partner G Flip by tattooing them with her own fair hand.

The luxury real estate agent confirmed her relationship with the non-binary rapper, real name Georgia Claire Flipo, in the Netflix reunion episode after discussing her split from Jason Oppenheim.

And it looks like the couple is seriously loved up as Chrishell was pictured inking her other half in a tattoo parlour over the weekend.

G Flip shared the images of the moment on their Instagram page, captioning the post: ‘f*ck houses do ink.’

In one photo, Chrishell wore latex gloves as she held a tattoo gun over her partner’s leg while crouched down on the floor.

G Flip appeared to be psyched by the shenanigans as they stuck their tongue and flashed a rock on sign at the camera as they sat on the table.

The second snap showed the end result of the permanent artwork, which read ‘get me outta here’, presumably in Chrishell’s handwriting.

Pleased by her handiwork, Chrishell commented on the post: ‘Found my new calling. Might open up a new shop.’

The former couple had confirmed they were an item in July last year, and they seemed to be totally smitten.

However, after months of dating the couple decided to go their separate ways in December 2021 as they were ultimately on different pages about having children.

Giving an insight into how Jason and Chrishell are coping with the break-up, Selling Sunset star Maya Vander exclusively told Metro.co.uk that they ‘have a lot of respect’ for each other.

In the reunion, Chrishell’s revelation about her budding relationship came as a surprise to several of her castmates.

She continued: ‘I’ve been spending a lot of time with someone who is very important to me, they’re called G Flip, they’re non-binary so they go by they/them.’

Selling Sunset is available to stream on Netflix.