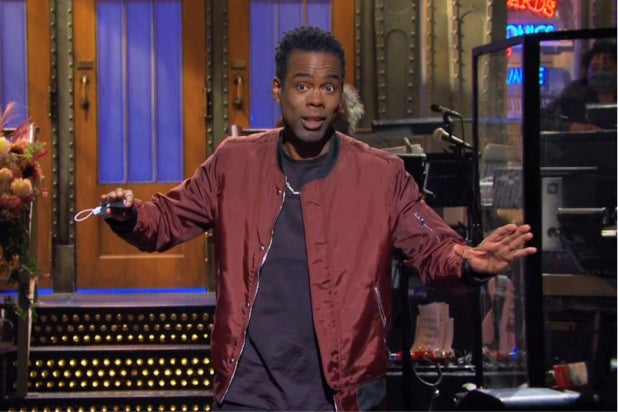 Chris Rock hosted the premiere episode of the 47th season of “SNL” on Saturday, and in his opening monologue the comedian and former cast member talked a lot about current events, ultimately ending on a plea for people to vote in November.

But of course he also talked about the only thing the rest of us can talk about — the fact that after months and months of mocking safety protocols and minimizing the danger posed by the COVID-19 pandemic that has already killed more than 200,000 Americans, Donald Trump has himself contracted the illness.

“Before we get started, you know — the elephant in the room. President Trump’s in the hospital from COVID, and I just want to say my heart goes out to COVID,” Rock joked right off the bat.

Rock then acknowledged the weird circumstances under which the season premiere is happening — that like almost everyone not associated with Donald Trump, “SNL has enacted strict safety measures to prevent the spread of COVID-19 in order to be able to film in the studio.

“This is a special show. This show is quite different than every other show. There are so many protocols. Everybody in this audience has been checked and all week I’ve had things going up my nose every day I come in here. I haven’t had so much stuff up my nose since I shared a dressing room with Chris Farley,” Rock joked. We’ll leave it to you to guess what he was talking about.

“The world is insane right now but one thing we can agree upon: COVID has ruined our plans,” he also said. “We all used to have plans before COVID. Remember you used to be able to plan stuff, man. My sister was getting married, man. Getting married. I paid Bell Biv DeVoe $80,000, man. I can’t get it back. I had tickets to Coachella, man. I know 200,000 Americans are dead, but I’m not seeing Rage against the Machine this year, man. That is a travesty.”

“Now one thing I’ve noticed about this whole pandemic — people are like reassessing their relationships,” Rock continued. “That’s the big thing, taking inventory. You know, a lot of breakups, a lot of divorces and a lot of, like, re-negotiations, you know. The couple stay together but they’re like, ‘OK, we’re gonna stay together, but I’m telling you exactly what I don’t like about you right now. If we gonna keep this going you’re going to have to change some stuff, OK?’”

“Yeah we need to renegotiate our relationship to the government. It doesn’t work! I mean, I think Joe Biden should be the last president ever. We need a whole new system, OK? Do we even need a president, or just figure out a new way to do the job? I mean, what job do you have for four years no matter what? Just show me one job,” Rock said. “Like if you hired a cook and he was making people vomit every day, do you sit there and go, ‘Well he’s got a four year deal. We just gotta vomit for four more years.’”

And speaking of game show hosts, Rock compared Trump to another one: “Steve Harvey can’t put his family on ‘Family Feud’. It’s like real scrutiny, man.

After some more commentary, Rock ended with his plea for people to vote.

“We gotta take it serious. Like I watch the Republicans take it serious. You watch Fox News, Sean Hannity is mean every day, he’s looking at you in the camera, he’s telling you it’s the end of the world. ‘Listen to me!’ And every time I see Anderson Cooper, he’s with Andy Cohen on New Year’s Eve blowing a kazoo, drinking rose. It’s like, of course they believe Sean!” he said.

“Walter Kronkite was like the most respected man in news. You know why? Because we never saw him in shorts. We gotta take this serious, man. We gotta take the whole government serious. This whole, everything going on right now, we can we can lick this, okay? We can beat this if we all work together. James Baldwin said, ‘Not everything that is faced, can be changed. But nothing can be changed until it’s faced,’” Rock concluded.