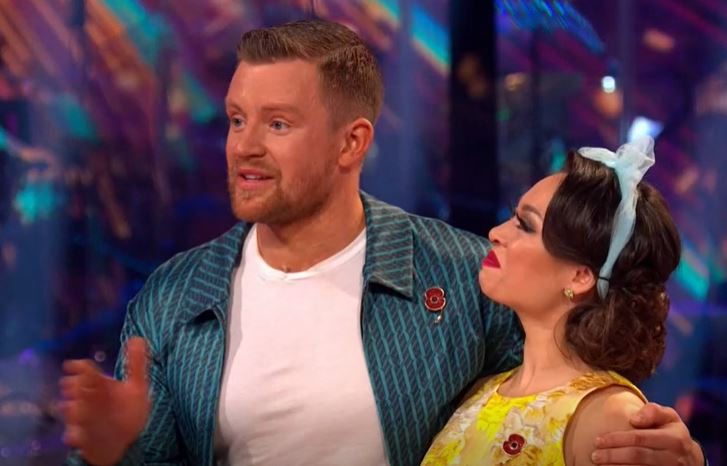 Adam Peaty’s furious mum has lashed out at last night’s Strictly Come Dancing result after her son was booted out of the contest.

The Olympic simmer, 26, and his professional partner Katya Jones, 32, became the sixth act to bow out of the contest last night after landing at the bottom of the leaderboard and failing to gain points with the public vote.

The couple found themselves in the bottom two with Tilly Ramsay and her partner Nikita Kuzmin, with judge Crag Revel Horwood even admitting it wasn’t the outcome he was hoping for and Shirley Ballas confirming she would have saved the athlete.

Caroline Peaty, however, called the result a ‘total fix’ on Twitter as she posted: ‘Proud @adam_peaty and @Mrs_katjones such an amazing partnership and @Mrs_katjones you have taught my baby boy how to dance, thank you x Total fix and I’m not buying the public vote.’

Katya commented: ‘Thank you for your support Caroline and the entire family. He is definitely a dancer inside and I’ve seen it with my eyes! What a privilege it’s been for me. X.’

Following his elimination, Adam took aim at his critics after receiving hateful messages by trolls online, particularly after viewers incorrectly thought he leant in for a kiss with Katya following their Argentine Tango despite having a girlfriend.

In a post on Instagram alongside a photo of Katya, he wrote: ‘I didn’t know how much it meant to me until I got a bit emotional after my dance off; however, I don’t think it was the dancing that pushed me over the edge, but the two years of the constant challenge with myself combined with the energy to win the Olympics and becoming a father at the same time.

‘My emotions are one of my strongest attributes and I’m not ashamed to show that I’m human.’

Later, he added: ‘For the people who tried to bring us down throughout the show, please challenge yourself to be better. The world needs much more positivity and truth.’

Speaking to Metro.co.uk before his final dance, Adam said he’d learned to overcome the criticism.

‘Normally you’d be like “Aw that’s annoying,” or “I hate what they write”, but you can’t control that, so what’s [the point] getting upset?’ he told us.

Metro.co.uk has contacted BBC for comment on this story.

Strictly Come Dancing continues Saturday at 6.40pm on BBC One.