Simon Rimmer, 56, took a break from this weekend’s Sunday Brunch proceedings as it was revealed the presenter had made the trip to Madrid to watch last night’s Champions League football game.

Joining host Tim, 51, for this morning’s show was Bake Off Professionals presenter and comedian, Tom Allen, 36, standing in for Simon.

The Channel 4 show announced the news earlier this week on their official Twitter page, posting: “So, @simonrim is off to the Champion’s League this weekend and guess who’s joining @timlovejoy as a presenter on Sunday… it’s going to be a LOT of fun @tomallencomedy!”

Commenting on the guests co-host’s appearance on today’s instalment of the cooking programme, Tim remarked: “It’s going to be such a long show. I can’t wait.”

This is going too be interesting

Taking to Twitter, viewers were stunned to tune and see Simon wasn’t going to be on the show, with one writing: “Simon looks a bit different #Sundaybrunch.”

Another added: “0MG #SundayBrunch turned off immediately as stand in presenter was shown..why would you do that to viewers?”

A third remarked: “This is going too be interesting.. @tomallencomedy on #sundaybrunch what his mouth doesn’t say his facial expressions will…”

Other viewers were pleased Tom was standing in today, with a fourth sharing: “Gutted to miss today’s #SundayBrunch (did I really say that?) as the wonderful @tomallencomedy is hosting! Be fabulous Tom!”

Commenting on Simon’s absence, a fifth chimed: “Tom Allen is HILARIOUS and I’m so excited for him to be presenting Sunday brunch #SundayBrunch.”

Whilst a sixth opined: “I am SO HAPPY this is happening right now!! #sundaybrunch @SundayBrunchC4,” referring to Tom’s hosting stint. 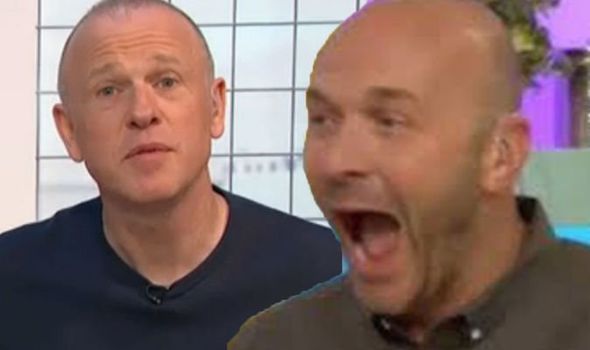 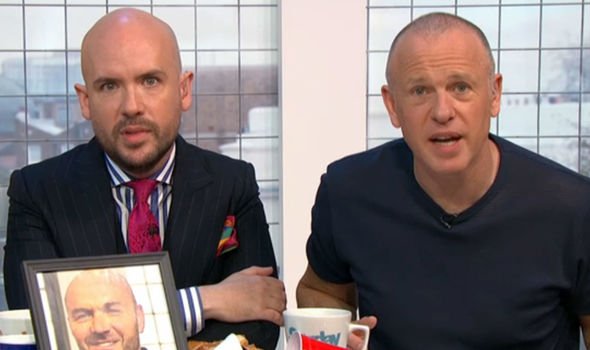 Those viewers missing Simon did get a little reprieve as the presenter made a cameo appearance via a short video, telling the hosts of his delight Liverpool won the game against Tottenham with a score of two – nil.

In the video, Simon said: “Six times. What a great result.

“Can barely speak, Absolutely shattered. Happy, happy boy,” with the presenters back in the studio joking about Simon’s gleeful appearance.

Although he wasn’t hosting the show today, Simon Rimmer recently spoke to Express.co.uk about some of the live blunders which have occurred on set.

Speaking about a time comedian Ricky Gervais, 57, appeared on the show in 2016, the TV chef told of an incident when the studio appliances failed him. 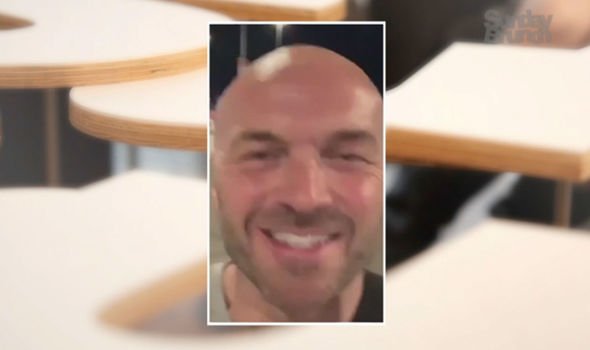 Simon said: “Years ago we had Ricky Gervais on the show and we was cooking seabass baked in salt. You know a proper classic dish.

“Unbeknownst to me, the electrics had failed on the oven. So the seabass hadn’t cooked and I literally opened the door [of the oven] and I knew straight away. There was no heat.

“All I had was raw seabass with salt that hadn’t baked. All we had was a whole raw fish. That was it.”

On last week’s show, former EastEnders actress Nina Wadia, 49, was a guest on the show and helped Simon with one of the dishes he was preparing.

Tim hasn’t been shy about his dislike for coriander and when Simon explained why he wasn’t putting it in, Nina jokingly goaded the host to add it to the dish, which led to an awkward moment between Tim and the guest.

Sunday Brunch airs Sundays at 9.30am on Channel 4.