“The Witcher” Season 2 makes a lot of choices typical to second seasons of suddenly popular series. What worked well is repeated, be it Henry Cavill’s husky, irritated energy or self-contained stories about men cursed into monsters. The established ensemble is separated, tasked with carrying their own arcs (and destined for a stirring reunion in the final episodes), while new characters set up supplementary goings-on to support a series now comfortable in its long-game. Enemies become allies, allies become enemies, and everyone wants to take a bath with Geralt. Goals are the focus — not necessarily completing any, but setting and pursuing them. (No baths with the Witcher through seven episodes, I’m afraid.) Everything is about the future and building to it, which makes less room for good, old-fashioned fights with multi-dentured she-demons and tentacled tree people.

But they’re still there. “The Witcher” Season 2 can grow a tad exhausting as it walks through the world-building due diligence expected of a worldwide fantasy franchise (with four spin-offs already in the works). Not for the life of me could I explain what’s going on with the impending war, or what role the Elves will or won’t play in it — all I know is Legolas wouldn’t raise his bow for any of these schmucks — but hot damn, when “The Witcher” lets its lead off the leash, Netflix’s epic adventure absolutely rips.

Picking up after the Battle of Sodden, where Yennefer (Anya Chalotra) wiped out a league of Nilfgaardian soldiers and then disappeared, the Season 2 premiere sees a freshly united Geralt (Cavill) and Ciri (Freya Allan) searching for the woman not named Jennifer. But when Tissaia (Aretuza Mage) can’t conjure Yennefer’s presence, she tells the father-daughter duo she’s dead, breaking Geralt’s (presumably) horse-sized heart. So like all sad boys do, he returns home, intent on training and protecting Ciri and needing to nurse his wounds (both physical and emotional.)

Geralt’s time at Kaer Morhen proves fruitful. Not only does he get to wile the days away hopping around on 20-foot tall beams, swinging his sword through the air like George Michael playing Jedi in the Bluth family garage, but he gets to hang with his buds! Heavy drinkers and sass monsters just like Geralt, his beloved bros can be a bit much — how many times does Geralt have to tell them not to bring sex workers back to their secret hideout?! — but they provide a spirited atmosphere and prove supportive of Ciri’s preparations. Plus, Vesemir, the group’s de facto daddy (and Geralt’s), is played by none other than Kim Bodnia, the big-eyed bear of a man perhaps best known to TV fans as Konstantin, Villanelle’s handler on “Killing Eve.” Whether he’s chopping limbs off a murderous birch man or concocting a dangerous potion for an innocent teen, Vesemir (and Bodnia) give “The Witcher” the supportive juice it needs to expand without putting audiences to sleep.

The same cannot be said for Yennefer’s similar attempts. Waking up in a nearby forest with Fringilla (Mimi Ndiweni), the sorceress learns she’s lost her magic and embarks on a winding journey to rediscover it — even if her quest means checking some dark corners. Since Geralt and a few others think she’s dead, much of Yennefer’s early arc is internal and her time spent on the run. Dreams are analyzed, unlikely friendships are formed, and there’s plenty of movement (including at least one odd trip to the sewer), but her action scenes pale in comparison to Geralt’s stylized bloodbaths and her development is basically paused as Ciri’s ramps up, creating an imbalance between the two main arcs sustaining Season 2. (And the third, which shifts between shapeless characters whose strange names are nonetheless memorable, is even more listless.) 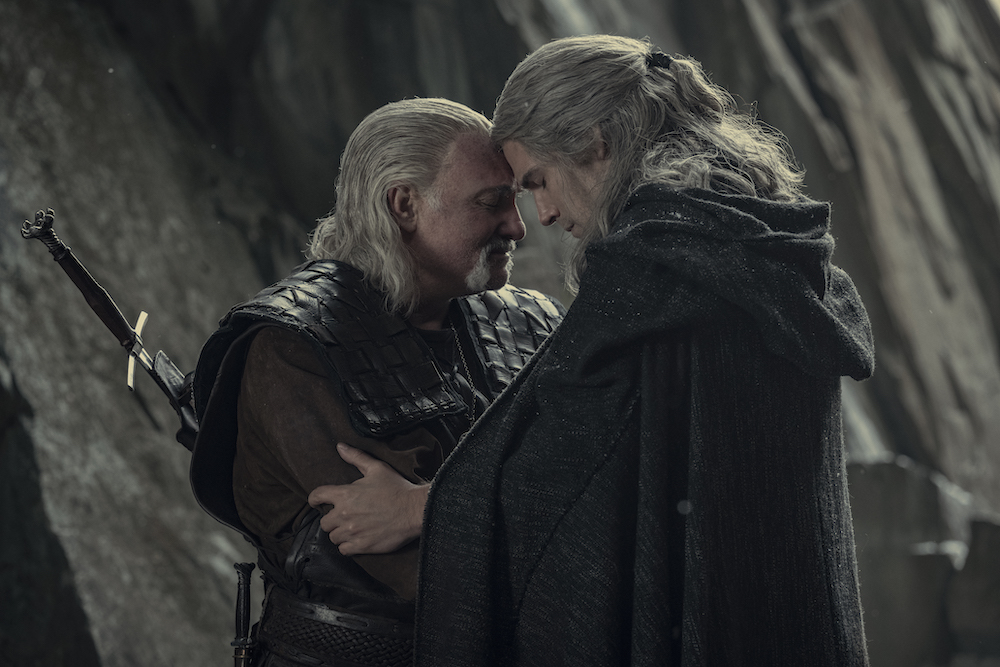 Kim Bodnia and Henry Cavill in “The Witcher”

Yennefer, Geralt, and Ciri make up a solid enough trio, even apart, and their separation brings an added layer of solemnity to a series about a bunch of outcasts so lonely they won’t even let themselves dream of better, fuller days. Thinking he’s lost the love of his life, Geralt won’t grant himself a moment’s solace, refusing a kind, intelligent, nighttime companion… and a bath — a bath! Someone hug our big lonely boy! Meanwhile, Yennefer’s existential crisis keeps her in a similarly reserved state, and Ciri, at one point, gets chastised for pursuing paths so dangerous they could kill her two different ways. But don’t worry: “The Witcher” is not suddenly a timely tale for pandemic times. (Note to my editor: Please don’t tempt me to write that hot take.) These moodier moments are mainly used to make the sudden action scenes all the more engaging, and you better believe it works.

A few favorites, if you’ll indulge me:

If you’re sensing a common theme, know that it brings me no pleasure to find a disproportionate level of joy in Geralt’s dust-ups. But I’d argue there’s far more enthusiasm put into choreographing, shooting, and performing his brawls than any other scenes in the show. He is, after all, The Witcher, and his unparalleled abilities need to feel unique. Though it’s been widely noted, “Witcher” fans should never take for granted the genuine passion their star brings to every scene. Cavill’s precise movements in battle help the cool factor, while his unflinching attitude — like these giant, disgusting, otherwise unkillable monsters are about as annoying to Geralt as an errant mosquito — makes every brouhaha that much more satisfying. Many will point to the mid-season addition of one divisive crooner as the show’s key bit of humor, but Cavill’s wry bloodlust is equally delightful.

“The Witcher” Season 2 may frustrate some viewers in how it goes about extending the series. Watching the foundation get laid isn’t always exciting, but it does feel like showrunner Lauren Schmidt Hissrich is building toward rousing sequences and cares about each of the characters equally. Whether you feel the same doesn’t really matter. “The Witcher” is in it for the long haul, and even if Season 2 feels longer than it should, you won’t regret the ride.