Christina Vidal has been breaking barriers since she was a teenager. In 2001 she became Nickelodeon’s first Latina leading lady as the star of “Taina,” a series following the eponymous youngster as she attends Manhattan High School of Performing Arts on her way to becoming a singer. Despite only running for one season, the series, created by Puerto Rican showrunner Maria Perez-Brown, became a fond memory for a generation of teens.

“That show was ahead of its time,” Vidal told IndieWire. “I think Maria was ahead of her time.” Vidal, who was just 20 at the time “Taina” aired, said it wasn’t until she reached adulthood that she understood the significance the series had on her as a performer. “I was just having fun, and doing the job, and being a kid,” she said. “It wasn’t until I got older that I realized, ‘Man, that was some important work we were doing there.’” Vidal said that ‘Taina’ was really her first big opportunity to delve into the waters of the 30-minute sitcom, something she’s reprising with her latest television series.

Now, Vidal is transitioning to a new network, ABC, with her sitcom “United We Fall.” The series, created by Julius Sharpe, sees Vidal play Jo, the Latinx matriarch of a rambunctious clan consisting of her two young daughters, her husband Bill (Will Sasso), and Bill’s inappropriate mother, played by Jane Curtin.

For Vidal, she’s a huge fan of sitcoms and comedy in general, but there was also a relatable quality to Jo and Bill’s story she gravitated towards. “I am this woman. This is how I feel being a mother and being a working mother,” she said. Based on Sharpe’s own life and marriage to a Latina, Vidal’s starring role comes out in an interesting time for Latinx representation on television.

Despite the transition of similar Latinx series “One Day At a Time” from Netflix to Pop TV, network television hasn’t given many opportunities for Latinos to thrive of late. The Jaime Camil-starring sitcom “Broke” on CBS was canceled after one season, this in spite of the fact it was the first CBS comedy series to star a Latino since Desi Arnaz. And ABC’s other Latinx series, the romantic drama “The Baker and the Beauty” — starring Vidal’s sister, Lisa — also abruptly ended despite fan protest.

Unlike a series like “One Day At a Time” that blends Latinx issues with typical familial hijinks, “United We Fall” goes for broader humor, which Vidal explains can be beneficial to present when discussing representation. “The focus is really on just these two people which can be positive for the Latino and Latinx community to show that we’re all just people who fundamentally need the same things,” she said. This isn’t to say the show can’t discuss specific topics affecting Latinos directly — and Vidal believes the show could address that down the line. 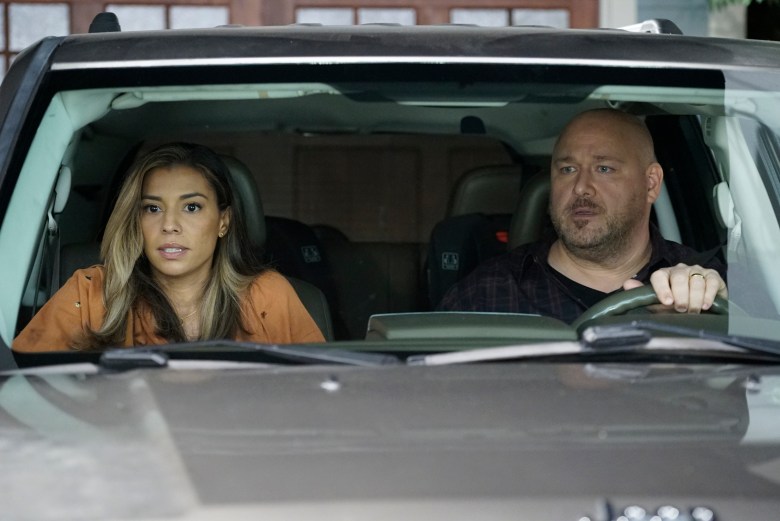 Christina Vidal and Will Sasso in “United We Fall”

But with “United We Fall” cementing itself as the lone Latinx comedy on network television at the moment, does it create a pressure for the series to represent all Latinos? Vidal doesn’t think so. “You feel pressure as an artist, as an actor, doing your craft,” she said. “I don’t necessarily think I’m carrying the weight of the Latin community. I think that sounds a bit arrogant.”

Working on the show also put her in the vicinity of other Latinx showrunners, specifically Gloria Calderon-Kellett of “One Day At a Time.” Calderon-Kellett plays a teacher Jo and Bill encounter during the series. “I just love what she [Gloria] has done in terms of getting Latin stories out there. It’s not just about being Latino, but it’s also about being a person, and being human, and I think she does that really well,” she said.

If anything, working with powerful women like Perez-Brown and Calderon-Kellett, and admiring the work of Eva Longoria has galvanized Vidal in her career. “I appreciate and respect [these] women behind-the-scenes…creating those paths for us and creating those opportunities for us to show up,” she said. That being said, don’t expect Vidal to get into the director’s chair anytime soon; she doesn’t think she could direct something she also stars in.

Justina Machado of “One Day” fame has spoken of her struggles to assert herself as a woman of color without being labeled difficult — something that also concerns Vidal. “I never want to seem entitled or difficult,” she said. For her it’s about “finding that balance of learning how to assert yourself, or assert what you need, respectfully.”

In the end, Vidal hopes “United We Fall” can comfort audiences dealing with the realities of the world. “It gives you that old-school, comfort food, feeling,” she said. “It’s always helpful to be able to laugh through [tough things], and learn to find the silver lining and keep your positive attitude.”