Programming has not been kind to this Perth-based drama series. It was pushed aside to make way for Killing Eve and Endeavour, potentially ruining any sense of engagement viewers might have developed with the folk of the fictional suburb of Arcadia. Here's hoping it can win back the attention that it deserves. The double-episode return sees Sabine (Bridie McKim) becoming the victim of harassment and Ryan (Mitchell Bourke) dealing with the arrival of a former flame. 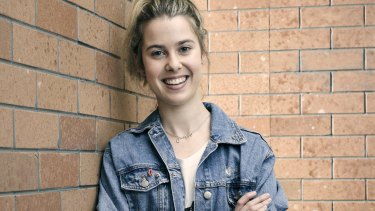 Actor Bridie McKim, who stars in the ABC drama The Heights.Credit:ABC

Phil Miller (Will Forte, also the show's creator and writer) is the sole survivor of an apocalyptic virus, or so he thinks as he embarks on the kinds of jinks a resolute man-child might do in the circumstances; wrecking things, getting drunk and eventually becoming suicidally bored and lonely. Smoke signs lead him to discover another survivor, Carol (Kristen Schaal), who from the outset isn't quite the perfectly matched Eve to this poor specimen of an Adam. It's a clever set-up to a series that spawned four seasons and a swag of Emmy nominations in its first season, though it often has the feel of a sketch comedy