Season 2 of the Netflix hit “Too Hot To Handle” premieres June 23, and this season promises to be even more sizzling than the last!

This season’s contestants will be staying at a luxe villa on Turks and Caicos, but there’s still plenty of challenges to deal with (via People). They’re basically limited to talking and can’t make any physical connections. That means these singles can forget about kissing or anything else beyond that. If they pay zero attention to the rules, the $100,000 grand prize will “drop faster than our contestants’ libido.” This sounds difficult, but if contestants really want that cash, they will have to work for it!

Sparks flew between past contestants, but Season 2 promises plenty of fresh faces who will leave you on the edge of your seat. One of those newbies is Cam Holmes, a U.K.-based model who refers to himself as a “sexy nerd,” according to People. Keep reading for more details on Chase DeMoor, another new contestant who is bringing the heat!

Chase DeMoor is a professional athlete 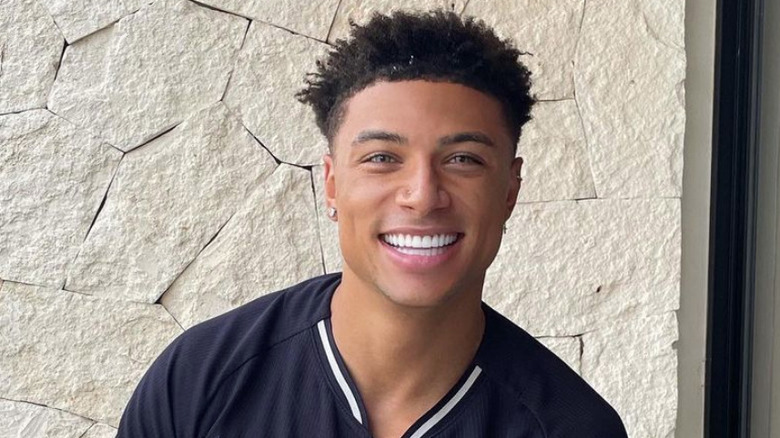 Chase DeMoor put his athletic talents to good use and plays football for the Houston Linemen, a development team on the Spring League, per his Instagram.

According to People, Chase describes himself as “tall, dark and handsome.” It seems like he’s leaning on his football prowess to attract partners, calling his sex drive a “100 out of 10.” Interesting. If Chase wants a chance at the $100,000 grand prize, he might have to focus less on the physical aspects of a relationship and sharpen his conversation skills instead. He clearly has his work cut out for him!

When he’s not tossing around a football, Chase enjoys posing in front of cacti in Arizona and posing for photos in the late afternoon sunlight. He also has a thing for sharing motivational quotes on Twitter. As he wrote on June 15: “Adversity doesn’t change you as a person, adversity reveals who you are. When adversity strikes you go back to your learning, a lot of times people reach a certain level of success that when adversity strikes there character can’t match it. Don’t be that person.”

We can’t wait to watch him this season!