Overshadowed by global pandemic and political strife, 2020 and 2021 have seen the end of several flagship Showtime series, including “Homeland,” which garnered the network its one and only win for Outstanding Drama Series at the Primetime Emmy Awards back in 2012. But all is not lost for the premium cable network, which just might have a few tricks up its sleeve yet, as Golden Globe nominations grow closer.

But let’s start with a look at those series which recently took their final bow. While it might be something of a long shot to see “Homeland” return to its former glory, particularly given the final season’s invisibility at last year’s Emmy Awards, it’s not unthinkable that Claire Danes slip into a lead actress lineup or two in acknowledgment of her final turn as Carrie Mathison.

It’s also fair to mention “Shameless,” currently airing its 11th and final season. Even if it doesn’t make an appearance during the Winter TV Awards season, it’s worth keeping an eye on repeat nominee William H. Macy when the Emmy prognostication season begins.

And for those keeping track, glowering prestige drama “Ray Donovan” also ended in 2020, but with a season which aired primarily in 2019, rendering it ineligible for this year’s winter awards. (So this is mostly to point out how recently “Ray Donovan” was still on the air and also that it ran for seven seasons, which honestly seems like a lot.)

All that turnover doesn’t have to be bad news for Showtime, particularly when it comes to limited series contenders, which is where the network has the deepest bench.

Leading the pack is the sterling limited series “The Good Lord Bird,” starring Ethan Hawke as fire-and-brimstone preacher John Brown during the run up to his infamous raid at Harpers Ferry and the beginning of the American Civil War. Adapted from the 2013 James McBride novel that shares its name, “The Good Lord Bird” garnered praise from critics, who seemed particularly taken by Hawke’s portrayal.

That’s good news for Hawke, particularly when it comes to the Golden Globes, which has previously shown a certain affection for the leading men of Showtime limited series, including last year when Russell Crowe won for his turn as Roger Ailes in “The Loudest Voice.” 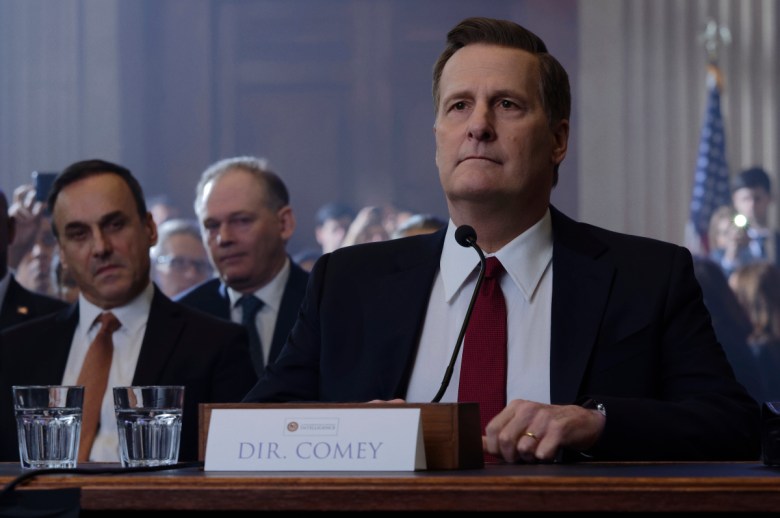 Jeff Daniels in “The Comey Rule”

But Hawke may face some of his stiffest competition from other actors on the network, particularly with regard to Jeff Daniels in “The Comey Rule.” The two-part limited series based on former FBI director James Comey’s book, “A Higher Loyalty: Truth, Lies, and Leadership,” stars Daniels as Comey himself in a story that spans the end of the 2016 election — where he inadvertently gave credence to the “But her emails” complaints just 11 days before Election Day — through the early days of the Donald Trump administration, during which Comey meets Trump (Brendan Gleeson) for a private dinner at the White House where the president demands loyalty.

Also featuring Holly Hunter as Sally Yates, “The Comey Rule” might be the kind of post-2020 election fodder that the Hollywood Foreign Press Association can sink its teeth into.

If that weren’t enough to turn the head of awards bodies, Showtime also has limited series “Your Honor” which boasts Bryan Cranston at its center as a well-regarded New Orleans judge who must weigh his own moral character against the life of his son. The series, adapted from an Israeli TV series, also features Michael Stuhlberg as a mob boss and Isaiah Washington Jr. as a politician who plays fast and loose with both sides of the law.

Beyond limited series, however, things get dicier for Showtime, save for one bright spot.

Though often overlooked, “Black Monday” remains a solid and engaging series for Showtime, which has earned Don Cheadle two Emmy nominations for Lead Actor in a Comedy in each of the show’s two seasons. There’s every reason to think that the HFPA, at the very least, could again open their arms to the actor who has nabbed five Golden Globe nominations — and two wins — throughout his career.

If Showtime is looking to breakthrough outside of its limited series offerings, Cheadle might just be its best bet.