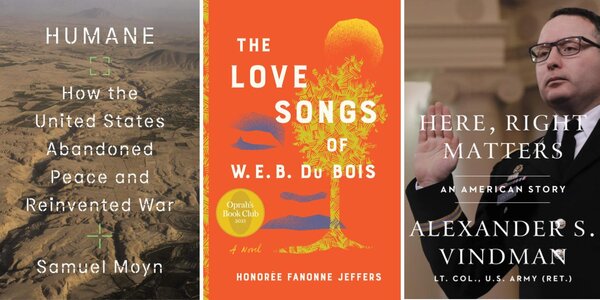 If you’re looking for escapist reading, this week’s recommended books won’t help. But if you want a cleareyed and sometimes rousing look at the state of the world today, settle right in: We’ve got books about the Mexican drug trade and America’s efforts to combat it (“The Dope,” by Benjamin T. Smith), along with an argument that modern warfare is too easy (Samuel Moyn’s “Humane”) and a memoir by a key figure in Donald Trump’s first impeachment (Alexander Vindman’s “Here, Right Matters”). We’ve got a hardscrabble immigration memoir from Qian Julie Wang, “Beautiful Country,” and two books exploring aspects of technology: Meghan O’Gieblyn’s “God, Human, Animal, Machine” and Tom Standage’s “A Brief History of Motion.” And in fiction, we recommend three debut novels about characters trying to make the best of sometimes dire circumstances: “Paris Is a Party, Paris Is a Ghost,” by David Hoon Kim, “Three Rooms,” by Jo Hamya, and “The Love Songs of W.E.B. Du Bois,” by the accomplished poet Honorée Fanonne Jeffers.

HUMANE: How the United States Abandoned Peace and Reinvented War, by Samuel Moyn. (Farrar, Straus & Giroux, $30.) In his smart and provocative new book, Moyn suggests that making war less cruel diverts Americans from pursuing the more radical goal of genuine peace. Spectacular technological advances have reduced casualties — at least when compared with conventional warfare — but they have also opened up new ethical conundrums. Our critic Jennifer Szalai writes: “Arriving 20 years after 9/11, as the United States has withdrawn its troops from Afghanistan, ‘Humane’ encourages readers to ask central questions too often lost amid the chatter of the foreign policy establishment.”

GOD, HUMAN, ANIMAL, MACHINE: Technology, Metaphor, and the Search for Meaning, by Meghan O’Gieblyn. (Doubleday, $28.) In brainy, loosely linked chapters, O’Gieblyn eloquently dissects our tech-obsessed culture’s elevation of data and quantification over qualitative experience, detecting in our relentless turn toward machines the remnants of a more humane, even spiritual reality. The book is a “hybrid beast, a remarkably erudite work of history, criticism and philosophy, but it is also, crucially, a memoir,” Becca Rothfeld writes in her review, applauding O’Gieblyn for speaking from a frankly personal point of view: “For all our posturing, beings like us could scarcely hope to speak from anywhere else.”

THE LOVE SONGS OF W.E.B. DU BOIS, by Honorée Fanonne Jeffers. (HarperCollins, $28.99.) This triumphant debut novel follows a young Black woman figuring out how to live with joy in the modern American South. The novel switches between the past and the present, alternating the heroine’s story with those of her ancestors. “‘The Love Songs of W.E.B. Du Bois’ is quite simply the best book that I have read in a very, very long time,” Veronica Chambers writes in her review. “I will avoid the cliché of calling it ‘a great American novel.’ Maybe the truest thing I could say is that this is an epic tale of adventure that brings to mind characters you never forget: Meg Murry in ‘A Wrinkle in Time,’ Scout in ‘To Kill a Mockingbird,’ Huckleberry Finn.”

A BRIEF HISTORY OF MOTION: From the Wheel, to the Car, to What Comes Next, by Tom Standage. (Bloomsbury, $28.) Standage offers an eminently readable history of 5,000 years of human movement undertaken not by foot or by feather, but by way of the wheel. The book comes into its own in more modern times, looking at our current landscape and the future of electronic and self-driving cars. “Standage writes with a masterly clarity,” Simon Winchester writes in his review, and with vivid prose even when he turns his attention to “a dreary world of self-driving cars and Ubers everywhere and drone deliveries and electronic highways and artificial intelligence and things that may well be around the corner or the block but that fogies like me wish would just go away.”

THE DOPE: The Real History of the Mexican Drug Trade, by Benjamin T. Smith. (Norton, $30.) Crammed with violence and mayhem, this chilling account of America’s efforts to curtail drug traffic from Mexico grimly concludes that as long as demand in the United States continues, the drug trade will not slow down. “Written with a journalist’s eye and a historian’s perspective,” as Anthony DePalma puts it in his review, the book “presents the war on drugs in all its grubby, often grisly, detail. … Smith spent nearly a decade panning for truth in the slurry of myth, paranoia and self-aggrandizement that surrounds the Mexican drug trade.”

THREE ROOMS, by Jo Hamya. (Houghton Mifflin Harcourt, $25.) Following a young, unnamed woman of color armed with multiple degrees and a bitter experience of the job market, this debut novel invokes the reality of living in a world where a reasonable demand — a place to call one’s own — is resolutely categorized as unreasonable. “The narrator of ‘Three Rooms’ is caught between awareness of her privilege and a growing disbelief at how little it now buys,” Katie Kitamura writes in her review. Hamya “documents the daily grind of temporary employment and accommodation, from the narrator’s sublet in Oxford, to the couch she sleeps on while working at a society magazine in London, to the childhood bedroom she returns to in the end.”

PARIS IS A PARTY, PARIS IS A GHOST, by David Hoon Kim. (Farrar, Straus & Giroux, $26.) In Kim’s debut novel, a translator in Paris finds himself racked with guilt after the sudden death of his lover, and strangely compelled to follow strangers. This meandering but richly written book explores the often doomed impulse to fill the voids in our lives. “Henrik is the kind of wandering soul who has trouble seeing things through, bright enough for auspicious starts but never quite resolute enough for the long haul,” Dave Kim writes in his review. The author “fills the book with misjudgments, mistaken impressions.”

BEAUTIFUL COUNTRY: A Memoir, by Qian Julie Wang. (Doubleday, $28.95.) In 1994, Wang moved from China to Brooklyn with her family. This is her memoir of their tumultuous early years building a life in an unfamiliar and mostly inhospitable place. “‘Beautiful Country’ is not only a window into a family’s experience of beginning again with limited resources, it’s also the story of a reader using books to find her way,” Elisabeth Egan writes in her latest Group Text column. “Fiction serves as both guidebook and lifeline for this young student, who proves to be a sponge for language.”

HERE, RIGHT MATTERS: An American Story, by Alexander Vindman. (Harper/HarperCollins, $26.99.) A major figure in the first Trump impeachment trial tells how he stepped into history by deciding to testify against the president of the United States, and what the ramifications have been. “Equally gut-wrenching, but in a different way, are his accounts of the many who made the opposite choice — those whose careerism or narrowly conceived professionalism led them to go along with Trump’s chicanery, and sometimes to lie,” Risa Brooks writes in her review. “In the end, beyond explaining why he did the right thing, Vindman seems to have another goal in telling his story. He is reminding, or rather cajoling, Americans to remember who they are.”