A flower worth more than a house: The best-selling history of the tulip’s unexpectedly dark and complex past is reissued in a 20th anniversary edition

Who doesn’t love tulips? Colourful, flamboyant, easy to grow and cheap as chips, they are the perfect plant to brighten up a spring garden.

Yet these cheery flowers have an unexpectedly dark and complex history. The tulip has had ‘more adventures than any Hollywood scriptwriter would dare invent’, writes Anna Pavord in a new introduction to her best-selling history of the tulip, reissued in a 20th anniversary edition.

It is, she says, ‘the sexiest, the most capricious, the most various, subtle, powerful and enthralling flower that has ever grown on earth’. 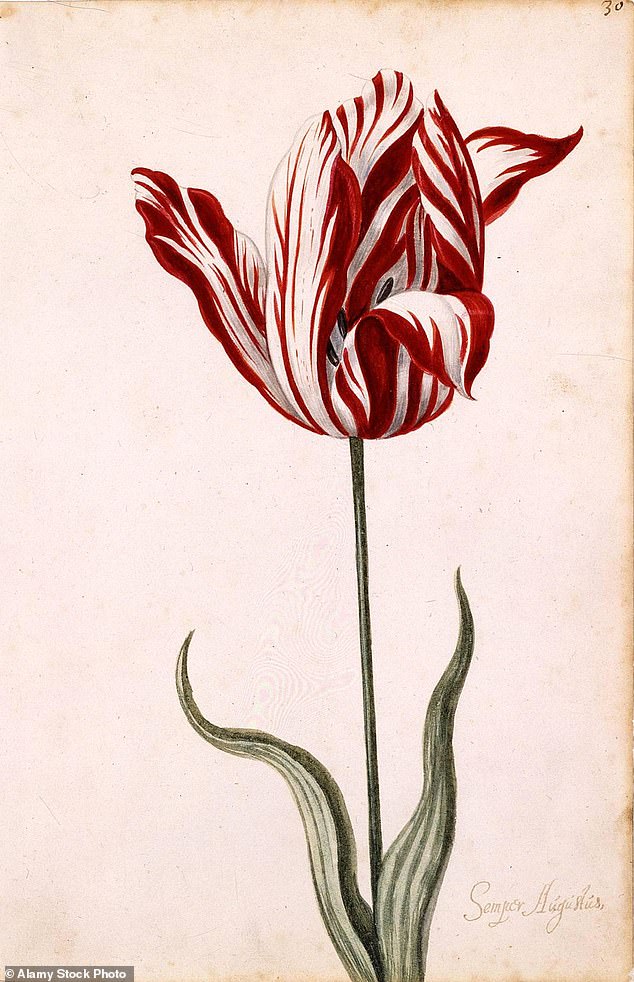 The tulip has had ‘more adventures than any Hollywood scriptwriter would dare invent’, writes Anna Pavord in a new introduction to her best-selling history of the tulip

Although tulips are firmly associated with Holland they are actually native to central Asia, their natural habitat stretching eastwards from Turkey to Armenia, Azerbaijan, Turkmenistan, Uzbekistan and Kazakhstan.

It was in the mid-16th century that European travellers first brought back news of the brilliant red flowers they had seen growing in the wild.

The tulip’s popularity spread rapidly throughout France and the Low Countries, finally reaching England in the 1560s.

Its arrival owes much to the Protestant Huguenots fleeing religious persecution in Flanders, for whom tulips were a valuable and easily portable commodity.

Across the Channel, the French were embracing tulips with extraordinary fervour. Aristocratic ladies at the court of Henry IV pinned tulips in place of jewels to their low-cut bodices, and the flowers were strewn over tablecloths at important banquets.

Some bulbs fetched dizzying prices: a brewery worth 30,000 francs was handed over as payment for a single bulb of one rare variety.

A few decades after the French passion for tulips had waned, Holland was gripped by a similar craze, now known as Tulipomania.

Between 1634 and 1637 the normally stolid, sensible Dutch became obsessed with tulips, recklessly spending insane sums of money on bulbs, then selling them on at ever higher prices without even having seen them bloom. 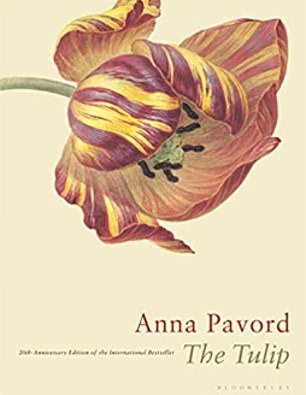 At its peak, one bulb of the scarce red and white Semper Augustus tulip (pictured) fetched 13,000 florins, more than the price of a house on one of the canals in the centre of Amsterdam.

When Tulipomania came to an abrupt end, many unfortunate merchants found themselves stuck in the 17th-century equivalent of negative equity, with bulbs which had suddenly become worthless.

The tulip was even responsible for the downfall of a ruler. In Turkey, the reign of Sultan Ahmed II from 1703 to 1730 is known as the Tulip Era.

The sultan loved tulips so much that he had them reproduced on carvings, fountains, tombs and murals, praised in poetry and used as motifs in painting.

Alas, his passion for tulips was to be his downfall. The sultan’s subjects, outraged by his extravagant tulip festivals, forced him to abdicate.

Why have so many people through the ages been driven to act so irrationally by a flower? Pavord believes that a large part of the tulip’s mystique is to do with its ability to mutate.

‘Its extraordinary diversity, its desire always to be trying on new clothes, is precisely what made it a source of wonder and delight’, she writes.

Much of the tulip’s unruliness comes from the curious process known as ‘breaking’, where a plain tulip can morph into a splendidly multi-coloured flower, streaked with contrasting colours.

To 17th-century eyes, this seemed nothing short of magical.

It was only in the 1920s that scientists discovered this colour mutation was due to a virus, spread by aphids, which suppresses part of the tulip’s colour, allowing the underlying colour — always white or yellow — to show through.

The result is a tulip that looks as if it has been hand-painted with a fine brush.

The Tulip was a worldwide best-seller when it first appeared in 1999 and Pavord attributes this partly to its publication coinciding with the peak of the dot-com boom.

‘Economists were going back to Tulipomania to see what they could learn from that cataclysmic event. It was the same message — greed makes people do odd things,’ she says.

Twenty years on, the book remains a magnificent achievement, an elegantly written mix of history and botany — though if you are looking for tips on tulip growing, or illustrations of modern varieties, you’ll be disappointed.

There are dozens of beautiful botanical paintings but few photographs.

Today there are more than 7,000 varieties of tulip, divided into 15 different categories including ‘double early’ or ‘lily flowered’, in every colour you could wish for — except for solid blue and black.

Tulips do have their drawbacks, even if the author rather skates over them. Mice and squirrels will often dig them up and, unlike crocuses, daffodils and bluebells, many tulips don’t do well if left in the ground year after year.

To get them to perform well, you need to dig them up after flowering and store them until the autumn — or just treat them as annuals, chuck them on the compost heap and start afresh with new bulbs every year.