‘Acid Raine’ Spencer made three aristocratic unions — one of them to Diana’s father, and a new book says she was always vivacious with a steely head for business

Remember Raine Spencer, daughter of Barbara Cartland and stepmother of Princess Diana? I do vaguely, as a tabloid hate figure of the 1980s, famous for her forbidding manner and enormous hair.

She used so much hairspray she probably had her own hole in the ozone layer directly above her house.

But her life was long, fascinating and full of incident — not least her three marriages to earls or counts, making her a countess three times more than most women of the age.

As Julian Fellowes said of her: ‘Nobody is a countess three times by accident.’

Fellowes was a friend of hers and I’m guessing Tina Gaudoin would be too, as her book is admirably fair-minded and comes out as broadly pro-Raine, although her eccentricities and strangenesses are not skirted over.

Gaudoin is an old journalistic hand and she knows that a book like this has to rattle on at some speed. Actually, you can’t hear the rattle. It’s a much smoother ride than that, not unlike a Bentley gunning it down the M4 at 95 mph. 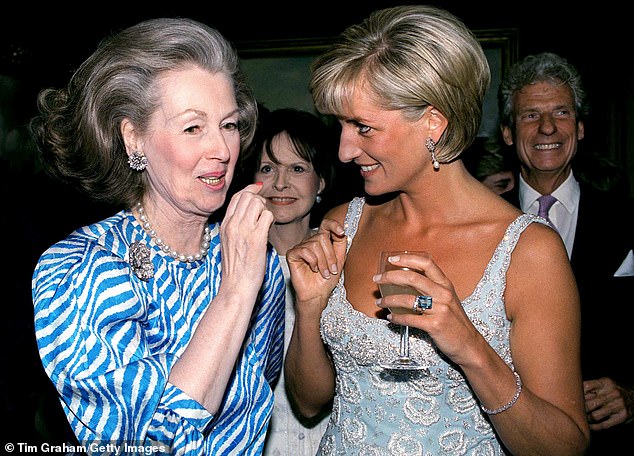 Raine was the first child and only daughter of the famed romantic novelist Barbara Cartland, who was as much of a character as you’d expect.

Among her swains were the Prince of Wales (later Edward VIII) and his younger brother George, later the Duke of Kent.

‘Edward, it was said, was responsible for weaning his brother, younger by eight- and-a-half years and a notorious bisexual, off morphine and cocaine after he became addicted during a friendship with Kiki Preston, the American socialite known as ‘the girl with the silver syringe’.’

How unlike the home life of our own dear (late) Queen.

Barbara would not allow any suitor to kiss her unless he proposed beforehand.

‘Small wonder that she had 48 proposals of marriage before accepting the 49th.’ He was Alexander ‘Sachie’ McCorquodale, of Cound Hall, Shropshire, heir to a printing fortune.

She quickly became pregnant and, in 1929, gave birth to Raine.

But by 1930, the marriage was over. ‘Sachie’ was a lascivious drunk and philanderer, despite being barely capable of performing the sexual act. ‘I was never in the slightest danger of getting pregnant by him,’ she later said.

‘Her expectations of the physical side of marriage were, in fact, greater and more informed than might have been expected,’ says Gaudoin. ‘She had lost her virginity, she later admitted, to Viscount Elmley, the son of the seventh Earl Beauchamp, Lord Warden of the Cinque Ports, whose home, Madresfield Court, was the model for the house in Evelyn Waugh’s Brideshead Revisited.’

You can’t fault Tina for her lack of research. It’s just as well Barbara didn’t marry Hugh, as Lord Beauchamp was later forced to resign all his offices and leave England under a cloud, after being outed as a homosexual and as Barbara put it, ‘buggering the footmen’.

‘He was absolutely adorable as well as being the most amazing lover.’ But Barbara wasn’t much interested in Raine. She had wanted sons. Raine was bright and read everything.

‘Do tidy your hair, darling,’ said Barbara, ‘No man wants a clever woman.’

In 1947, Raine ‘came out’ as a debutante (the phrase had rather a different meaning in those days). ‘Coming out’ was a marathon, not a sprint,’ notes Gaudoin. ‘The season ran from May to July and a girl needed stamina, style and social connections to be truly successful.’

Raine had all three and was duly crowned ‘Deb of the Year’. She wasn’t overly popular among the other debs, mainy thanks to her ‘overblown appearance and her bloody pushy mother’, as one acquaintance put it. But she got her reward: the hand in marriage of the Hon Gerald Legge, soon to become Viscount Lewisham and later the 9th Earl of Dartmouth.

His grandfather, the 6th Earl, was said to have been the model for P. G. Wodehouse’s Lord Emsworth, having kept and revered a prize pig in the 1920s. Was Gerald the perfect man?

‘No. Friends thought him too weak for the bombastic, effervescent ball of energy that was Raine, but he was upright, patient, loyal and kind with good prospects. 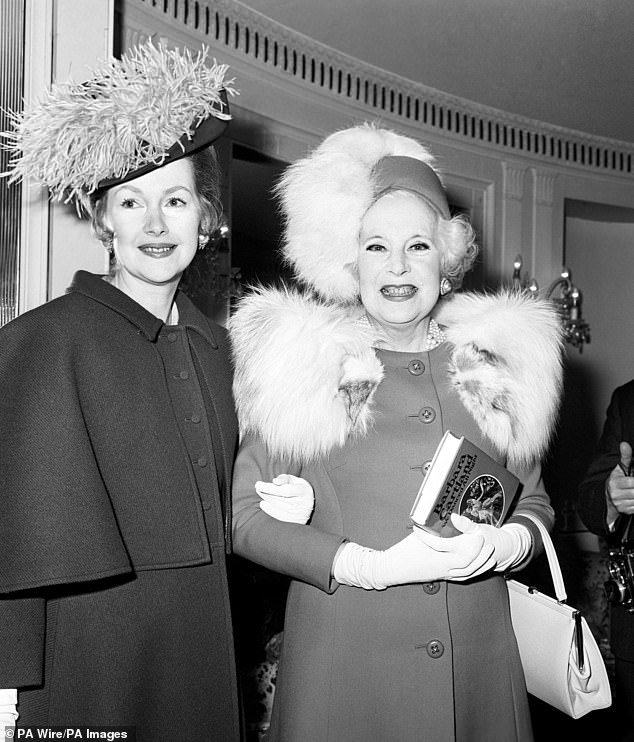 As well as serious socialising, Raine threw herself into charity work and Conservative politics. Pictured: Barbara Cartland (right) with her daughter Countess Raine Spencer in 1971 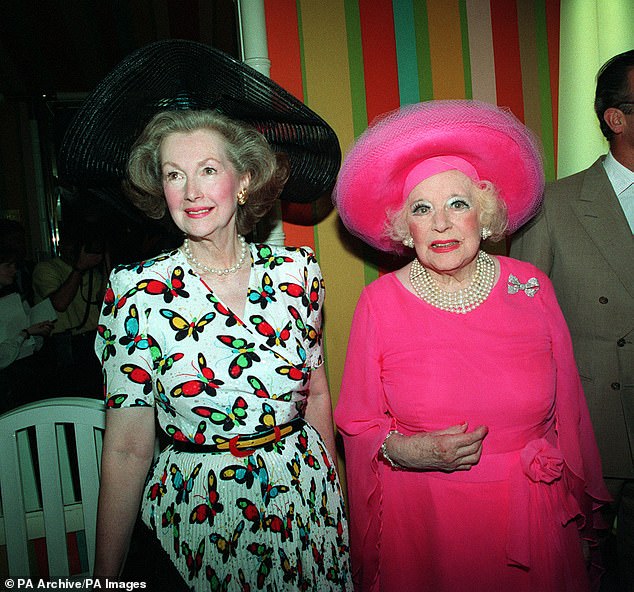 ‘And kindness and patience had thus far been in short supply in the young Raine McCorquodale’s world.’

As well as serious socialising, Raine threw herself into charity work and Conservative politics, serving as a councillor on the GLC until 1965. She was a talented self-publicist before the term had even been coined.

Chairing the GLC’s Historic Buildings Board in the 1960s, she saved the Coutts bank building in the Strand, Covent Garden and countless others, and published a bestseller called Do You Care About Historic Buildings?

But the role she probably became most famous for was as Princess Diana’s ‘wicked stepmother’, Acid Raine, having married her second Earl, Johnnie Spencer. She clearly ran rings around him, which was much resented by her stepdaughter, who initially hated her guts, but feelings between the two thawed in the Princess’s latter years.

Raine doesn’t seem to have mellowed at all, but I think we can now see her as one of the long line of Great British Battleaxes who operated in a man’s world and obviously flourished there. At no point would you like to have encountered her in a dark alley. That hair was probably an offensive weapon.

Gaudoin’s book is revealing and hugely entertaining. I’m not sure Raine’s reputation needed rehabilitating, exactly, but if it did, this book does the job. Highly recommended.