Inertia can be deeply unhelpful. On those rare occasions when important parts of our world really do change, as they did in the 1980s when our banks suddenly started behaving monstrously, we react as if they haven’t, as if each new piece of bad news is isolated and our financial institutions remain on the whole "world class", as one leading commentator infamously claimed while warding off calls for a royal commission.

Each time an insider from the Commonwealth Bank approached journalists from The Australian and Sydney Morning Herald before he found Adele Ferguson, they’d tell him the story was "too complicated, too risky, too much work, too this, too that". 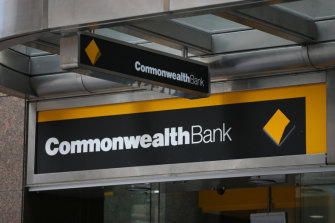 A Commonwealth manager in Goulburn was told to sell 150 loans a week. There were only 10,000 income-earning adults in the town and four big banks.Credit:Bloomberg

Australia’s most venerable bank – the one we let into our schools – couldn’t be completely rotten.
I thought that myself, even while spending time with the first wave of bank victims who’d been plied with foreign-currency loans whose repayments had exploded to more than their businesses and properties had been worth, taking everything they had.

I put them on PM on ABC radio. But I kept my equilibrium. Surely the banks were still trustworthy institutions that had themselves been victims of currency gyrations just as their customers were. They can’t have intended to make them destitute. 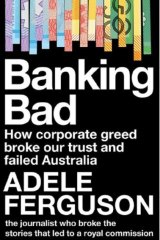 The first inkling I had that the banks might no longer care about their customers came in a conversation with David Murray, then the head of, or about to become head of, the Commonwealth Bank, and for me the most intriguing person in Ferguson’s book, Banking Bad. He told me the victims of currency loans must have known the risks. One was a maths teacher. But my mother had been a maths teacher and she wouldn’t have known the risks unless they had been carefully pointed out to her. I put it down to an unfortunate lack of empathy on Murray’s part, not to a change in the nature of the institution he led.

Ferguson documents the change, while unintentionally documenting her own repeated struggles with inertia as she came to realise the banks were not only selling loans that couldn’t be repaid, not only earning fat commissions and a healthy margin on the currency each time those customers tried to trade their way out of trouble, not only ordering staff to sell products they had no reason to believe were right for their customers (playing happy tones into their ears when they made phone sales and sad tones when they did not), not only deducting fees for advice from the accounts of customers who had died or no longer had advisers, not only allowing crime syndicates to launder money through high-tech automatic machines that whisked it overseas before it could be checked, but also – heartbreakingly – refusing to pay out insurance claims in the face of medical advice that they should and dragging out cases until their terminally ill customers died or ran out of money (which they could determine by checking their accounts).

Murray was 42 when he was offered the top job at the newly part-privatised Commonwealth Bank. He’d joined it as a teller when it was a public institution with a public-service culture. "It’s a bit early, isn’t it, for me?" he told the chairman, before transforming it – closing branches, sacking staff, rewarding tellers for sales rather than service, buying an insurer whose products they could upsell, setting up a stockbroker and financial planning arms whose products they could upsell, and imposing relentless never-ending targets. The bank manager at Goulburn in rural NSW was told to sell 150 loans a week. Goulburn had only 10,000 income-earning adults, and four big banks.

It would be tempting to think it was only the bank’s staff who cut corners, because of the pressure placed on them. But time after time Ferguson details what happened when their bosses found out. 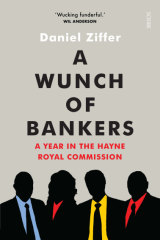 "Dodgy Don", a financial planner whose legendary ability to sign customers up for almost anything put him at the top of the Commonwealth’s league table, was suspended when the bank discovered he had been charging improper fees, putting clients into products for which they were totally unsuited and slipping back-handers to tellers who sent victims his way. Then he was reinstated and promoted to "senior planner". Staff who tried to help victims were discouraged. At least one was made to sign a legal agreement not to.

Ignorance on the part of the victims, each one believing he or she was alone, was essential if they were to keep quiet and the good public image of the bank maintained. That’s why when Ferguson’s Four Corners program (same title as the book) exploded onto the screens in 2014 she was inundated with emails and calls from victims who’d paid up or kept quiet, not knowing they had been part of something systematic.

In Parliament, it was the Nationals who pushed hardest for the royal commission. Several had been victims themselves. Labor, perhaps less in touch with voters, was cautious. The Liberal Party was either profoundly ignorant about the behaviour of the banks or thought it was OK. It blocked just about every move to treat customers better, including (bizarrely) attempting to remove a legislated requirement that financial planners act in the "best interests" of their clients.

When the Liberal Party succumbed, it made the commission’s time frame short and added in a reference to trade union-associated industry super funds, about which there had been hardly any complaints and to which the commissioner gave a clean bill of health. 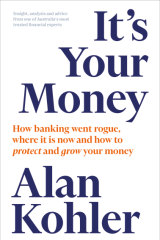 Ferguson, who covered the hearings for The Age and Sydney Morning Herald, was astounded by what she heard (some of it was new even to her), but disappointed by the result.

"Vertical integration" of the kind pioneered by Murray at the Commonwealth Bank will be allowed to continue, although for the moment the Commonwealth and two of the other big banks have abandoned it. Murray himself had gone on to chair the Future Fund and then the government’s financial system inquiry, in which he warned against the dangers of vertical integration. During the royal commission AMP appointed him as its chairman, to "lead the redevelopment of governance processes".

Daniel Ziffer doesn’t suffer from inertia. His book, A Wunch of Bankers, is a supercharged flight through the absurdity of the year he spent reporting from the commission for ABC TV. He gives us the good bits: the Commonwealth Bank might have charged dead people for financial advice, but AMP charged dead people for life insurance. National Australia Bank flicked commissions to "introducers": gym instructors, architects and other trusted non-experts who pushed $24 billion in loans its way. The financial services firm IOOF, whose website says it has been "helping Australians achieve financial independence since 1846", decided against putting its members into better products on the grounds they were generally disengaged and wouldn’t know the difference.

An unnamed director protested, using caps for emphasis: "In what circumstances would it NOT be in a client’s best interest to transfer to the new pricing if it was lower than their existing pricing?" The unnamed hero later asked, in an observation Ziffer describes as "meta": "How would this look on the front page of The Age?"

Alan Kohler offers practical advice about how not to get ripped off by the finance industry, enlivened with insights from the commission and the inquiries that went before it. It’s Your Money is an extraordinarily valuable book, but only for people able to take control of their money. As he concedes, many people can’t, and it’s up to the authorities to protect them. The authorities have failed in that job for the best part of 40 years.

It’s up to those of us who can to keep up the pressure. The financial services industry will. It’s been shamed, but never remains shamed for long. Among people who weren’t paying attention, it still has a good public image.

Peter Martin is business and economy editor at The Conversation and a former economics editor of The Age. He is a visiting fellow at the ANU's Crawford School of Public Policy.