“What if I never get an answer?” wonders Boratin Bey, the protagonist of the Turkish writer Burhan Sonmez’s short, provocative novel “Labyrinth.” The question, posed time and time again, has serious implications for him and for us.

We first meet Boratin, a resident of Istanbul in his late 20s, at a pivotal and bewildering moment: He has just returned home after a week in the hospital following a suicide attempt. (He jumped from a bridge into the Bosphorus.) While his body emerged miraculously intact except for a broken rib, his mind was knocked off course. He has no memory of who he is or why he wanted to kill himself.

“For now you own things that you can’t explain, things that will take shape over time,” his doctor says, cheerfully predicting that all will be well in the end. “Whatever your past story may be, perhaps what you wanted was to get away from some aspect of this world.”

The tension in this occasionally profound and sometimes maddening book arises from whether Boratin will get his memory back, and whether we’ll figure out what really makes him who he is — and whether such seemingly profound questions even matter. His amnesia is partial, and specific: He can’t remember anything about his life or his past, but he knows how to use words, how to navigate daily existence, how to be a person in the world.

He also remembers historical facts, though he cannot place them in the correct context or chronology, so that recent events can have the same weight to him as the distant past.

“My mind, which hasn’t got a single word about myself in it, is bursting with facts about other things,” he says. “The names of ancient philosophers, the colors of soccer teams, the words of the first astronaut who went to the moon.” And yet none of this helps him solve the mystery of himself.

It is clear who he is; there’s an ID card in his wallet, and his friends identify him as a charismatic, popular, handsome, hugely talented blues musician. He doesn’t seem to have any enemies. He has been a thoughtful, helpful friend to many, even if he has apparently neglected his sister and nephew for the last few years. Learning this information leaves him cold, as if it has no bearing on the reality of his existence.

Liberated from the burdens of his history, Boratin spends his time brooding at home or wandering around Istanbul, encountering strangers (and occasionally friends) and musing on the nature of the self. Some of the questions he asks lead to profound musings into what makes us human; others reminded me of the never-ending conversational black holes my brother and I used to fall into late at night when we were children. 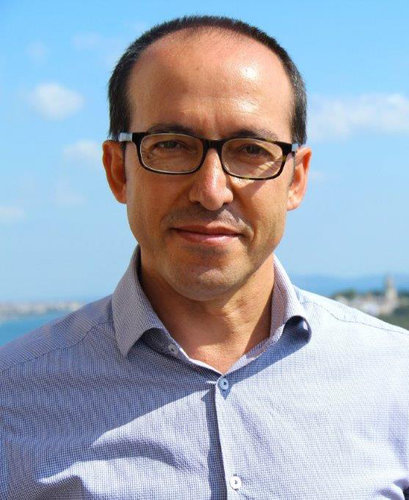 The questions flow out from the pages and echo our own. What makes us who we are? If we cannot remember our past does it still belong to us, and are we culpable for the things we have done? How do our personal histories intersect with the histories of our cities, our countries, our societies? When our friends see us — in the case of Boratin, these include his fellow band members, who try valiantly to support him and prod his memory — are they seeing the same person they have always seen, or someone else entirely? Can a person without a past have a meaningful present and a hopeful future?

These thought experiments might arrive in real life as we wonder about how it would be to reinvent ourselves without reference to what has come before. Or when we grapple with the fragility of the mind.

If I were to imagine “Labyrinth” as a movie, I would want it to be a kind of psychological suspense story, something akin to “Memento,” in which the memory-robbed protagonist becomes the indefatigable detective of his own story.

But that isn’t this story. For one thing, Boratin is a mostly passive character, a listless existential hero who often drifts through his days with an alienation befitting a Camus protagonist. The book, beautifully translated by Umit Hussein, reads like a fever dream, to one side of reality. Facts come and go, creating an impression but not adding up to anything you can wrap your arms around.

Conversations flow into one another in long paragraphs devoid of quotation marks and even punctuation to differentiate one speaker from another. The narration segues without warning between the first and the third person, with Boratin becoming first the subject and then the object of scrutiny.

It’s silly to criticize the behavior of a fictional character, in the same way it’s silly to criticize an author for writing a book different from the one you yourself might have written. But as I read “Labyrinth,” I wanted to shake Boratin out of his stupor, to demand that he try to engage more with the effort to recover his life.

Boratin, wracked with uncertainty about everything except the basic existence of his body, becomes obsessed with his own reflection in the mirror. (Lest we miss the deeper meaning, Sonmez has deployed an epigraph from Borges, whose “Labyrinths” is the inspiration for the book’s title: “It only takes two facing mirrors / To construct a labyrinth.”)

“I look without blinking,” Boratin says. “The image in the mirror doesn’t blink either. I wait to see which of us will grow tired and give in. Whoever blinks first is me. When I stand in front of a mirror for a long time I get confused about which side I’m on.”

It’s hard to choose a side. It’s hard to know. We’re confused, too, and uneasy, and haunted. But we’re meant to be.