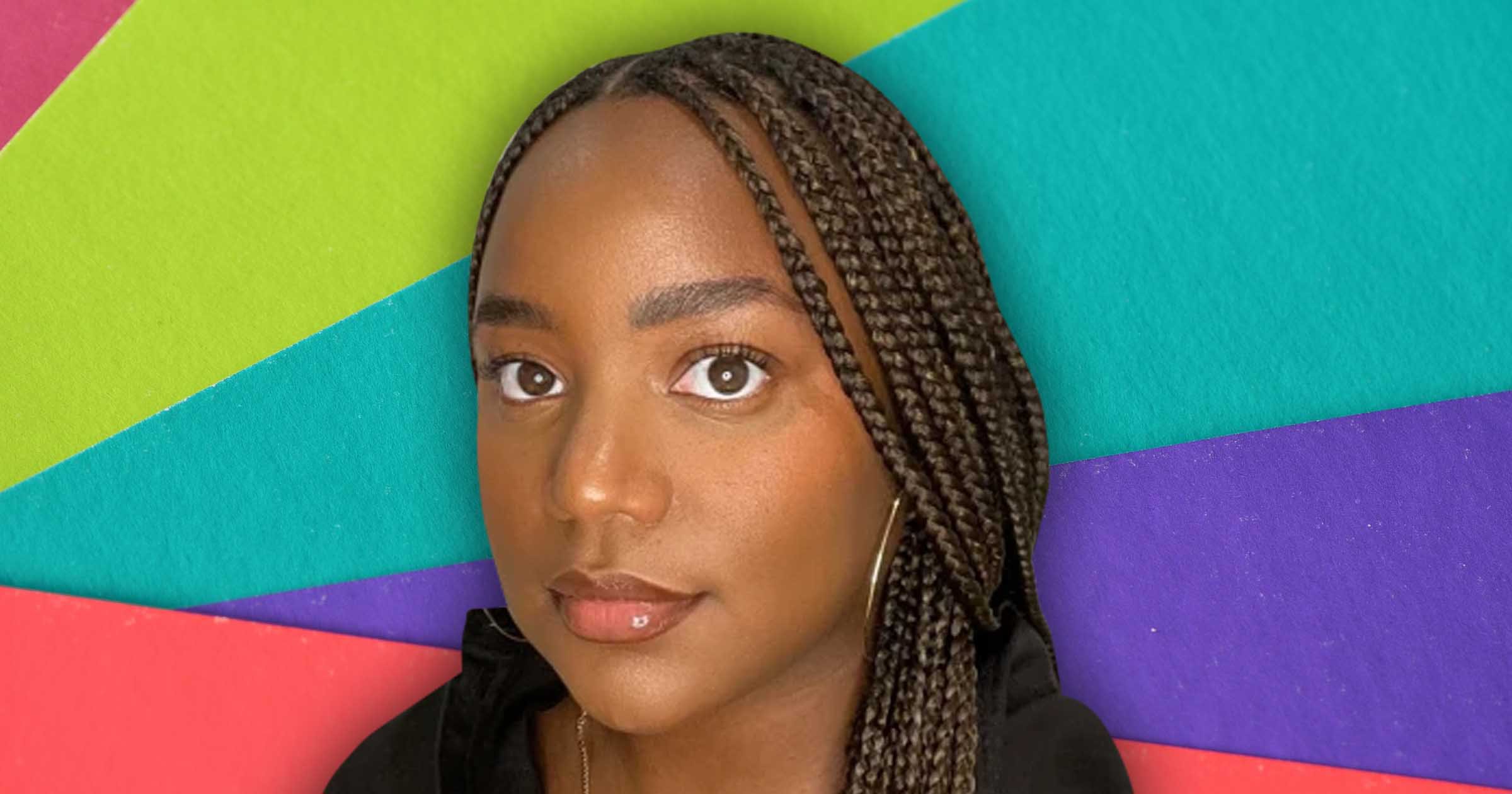 The Space to Write project has crowned its four winners, all of whom will be offered courses to give them just that – the space and time to create their masterpieces.

The project sought to find fiction writers from Black, Asian and minority ethnic backgrounds who are working on novels that have the potential to be the next big literary sensation.

Of the winners who were announced, this week we’ll get to know Camille Boxhill.

Natalie Morris, author and journalist, said on Camille’s writing: ‘I loved the assured writing and the immediately compelling world created in OBEAH.

‘After reading this short extract, I longed to know more about the journey our central character would take, and how the elements of magic would unfurl. The language and imagery were vivid and immersive, dripping with potential.’

Without further ado, here’s our exclusive Q&A with Camille…

What was the process of writing it like – from first having the idea to completing the project?

The idea for OBEAH first came to me when I was applying for postgraduate creative writing programs. The writing sample is a crucial part of any application, but I had no portfolio to pull from, and no work in progress that seemed promising.

So, I had to start from scratch and was stuck on what to write. I originally started with something very predictable and safe. Girl meets boy. Boy dumps girl. Girl stalks boy on Insta. It was stale.

Then, I thought about one of my favourite books I read during the pandemic: The Silent Patient by Alex Michaelides. It’s an incredible psychological thriller that draws on Greek mythology and tragedies. It got me thinking about honouring my Jamaican heritage, so I started looking to Jamaican folklore for inspiration.

Then, I thought of obeah, Jamaica’s spiritual folk practice used for personal protection or to bring harm to others. Dark, powerful, and shrouded in secrecy. It was perfect. That was pretty much my ‘aha’ moment, and the story started to take shape from there.

A few months later, I moved to England from New York to pursue writing. I’ve been lucky enough to receive feedback on early drafts through workshops. I’m also incredibly grateful for opportunities like the Madeleine Milburn Mentorship Programme and The Space to Write Project because I’m receiving the tools and, quite literally, the space I need to bring this book to life.

As writers from Black, Asian and minority ethnic backgrounds, do you feel pigeonholed to write about stories featuring characters from this community or themes prevalent in that culture?

I don’t feel pigeonholed. If anything, I feel empowered and proud that I get to share these stories. If there ever comes a time when it begins to feel performative or too much like tokenism, then that’s a sign for me to pause and reflect. There also isn’t one way to write about race.

Black people are not a monolith. We may have shared experiences, but that doesn’t mean they’re identical. In OBEAH, I wanted to look at issues of identity, particularly for second-generation immigrants who may feel stuck in the in-between of two cultures, not quite fitting neatly into either.

With that in mind, do you draw on personal experience when writing? Can this difference of experience be beneficial to your writing?

There are certainly parts of my book that are loosely based on my life. For example, the mother-daughter relationship is a central part of the story. I’m really close with my mom; she’s one of my best friends. So, that was helpful in building the relationship between Candace and her mother. There’s so much love, but, as the daughter of immigrants, there’s also this immense pressure of wanting to be successful so that my parents’ sacrifice of creating new lives in a new country isn’t in vain.

Candace grapples with this throughout the book. I also lived in Brooklyn for several years, and the feeling of community I experienced there was unmatched. That’s something I want readers to feel in my portrayal of the city.

And, no spoilers, but there’s a part in the book that deals with the racial and gender pay gap. It’s not the sexiest subplot, but it’s real and an experience many women, particularly women of colour, encounter in the modern workplace.

I remember having a really candid conversation about pay and equity with a colleague (and one of my closest friends) over lunch one day. I said: ‘Hey, if I tell you my salary, could you tell me if I left money on the table?’ That’s when I discovered I was making $15,000 [£12,670] less despite having the same title and similar years of experience. It was a total gut punch. There are a lot of moments like that throughout the book that I hope resonate with readers.

Of course, other parts are entirely fictionalised, where I really got to have fun creating something new. In an interview, Roxane Gay said of women and writing: ‘Often times the only thing women are allowed to be experts on is themselves.’ So, it’s important for me to distinguish, even with minor similarities, this is very much Candace’s story. It’s her journey that readers are witnessing.

What’s the best bit of advice you’ve had when it comes to writing?

Is there a particular feeling or action you want your writing to achieve?

I think this varies by reader.

I want Black women to feel seen and children of immigrants to feel represented. I also want readers to walk away with a better understanding of Jamaica and the country’s spiritual folk practices. There’s a mix of social commentary and humour, and I’m hoping that a lot of people will find something to connect with in this story.’

Keep reading for an exclusive extract from the winning book.

Mama says anything done in the dark must come to light, but I know how to keep a secret.

Besides, she is distracted, laughing loudly with her brother and sister in the kitchen.

My grandmother had churned out three children back-to-back. My uncle, the youngest and only boy, always claimed he was the favourite. Grandma never confirmed the theory that she and grandpa kept trying until they got a boy but, whenever we lock eyes during these arguments, she gives me a quick wink and her signature crooked smile.

After a long day of stifling heat, bottomless cups of rum cream, and barely audible melodies humming from ancient wood-panelled speakers, they gather in the kitchen exchanging tales from their childhood that seem to grow more exaggerated with each retelling.

I watch from the front room before slipping onto the veranda, carefully closing the iron gate behind me.

Outside, it’s dusk. I imagine the sun and horizon kissing in the distance. It will be dark by the time I arrive. It’s better that way. I try to quell a pang of guilt as I think about Mama, wondering what she would say if she knew my plans.

Growing up, I had heard all sorts of stories. In Mandeville, a young woman walks home from work and feels she’s being followed. She looks over her shoulder, except no one is there. When she looks ahead again, she sees her dead father standing in front of her. The following morning, the young woman’s mother says that her late husband appeared in her dreams and said to warn their daughter of walking alone at night.

In St. Mary, a young girl falls gravely ill. Her mother tries every herb and bush she can find. Nothing works. A friend says a neighbour is to blame. The mother digs the ground beneath the daughter’s window and finds a glass bottle of coloured liquid. In it, are strands of floating hair. She destroys the jar, and her daughter makes a full recovery.

In Kingston, a woman suspects a friend is stealing from her. She purchases new earrings. Weeks later, they’ve vanished. She’s gifted a decadent body butter. Within days, the cream is gone, her knuckles left to ash over in dehydration. Finally, she buys a pair of shoes and fixes them to swell the feet of any thief who wears them. The following week, she receives a call from her friend. She says her foot is swollen like a jackfruit, and she can’t walk.

Others call it voodoo, witchcraft even. But we call it obeah. It’s the dark underbelly of the paradise island.

I’m almost there now. I search the darkness for the marker: raised flags on bamboo posts.

The gate is all that separates us, now. I can still go home. Forget tonight happened, that I ever dared to play this game. Go back to—

A low creak disrupts the night’s silence as the front door opens slightly.

Get in touch by emailing [email protected]