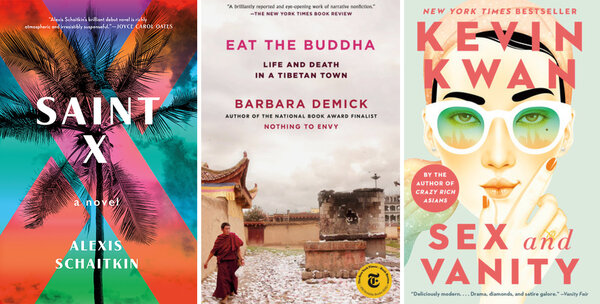 SAINT X, by Alexis Schaitkin. (Celadon, 368 pp., $16.99.) Years after a young woman was murdered on an idyllic family vacation in the Caribbean, her sister looks back at what happened. “Any death of course creates aftershocks among those closest to the deceased, but we rarely spare a thought for those on the fringes,” Oyinkan Braithwaite wrote in the Book Review. “Schaitkin does. … The connections are faint, the domino effect crystal clear.”

EAT THE BUDDHA: Life and Death in a Tibetan Town, by Barbara Demick. (Random House, 352 pp., $17.99.) Anne Fadiman praised this history of Tibetan resistance to Chinese domination as a “brilliantly reported and eye-opening work of narrrative nonfiction.” It focuses on the town of Ngaba, which has become the self-immolation capital of the world.

SEX AND VANITY, by Kevin Kwan. (Anchor, 368 pp., $17.) Our reviewer, Elisabeth Egan, called Kwan’s fourth novel, about a high-society wedding, the perfect beach book: “The only deep thing about it is the sea off the coast of Capri, where the book begins.”

THE BIGGEST BLUFF: How I Learned to Pay Attention, Master Myself, and Win, by Maria Konnikova. (Penguin, 368 pp., $17.) How did a writer with a Ph.D. in psychology become a poker champ? “Konnikova hasn’t written a book about her success with cards and chips exactly,” Michael Paterniti wrote in our pages. But she “bet the house on the power of her mind to synthesize big philosophical ideas and psychological insights at a time when we, too, find ourselves questioning our fortunes, hoping to master our fates and playing much bigger odds than ever before.”

LUSTER, by Raven Leilani. (Picador, 240 pp., $17.) Our reviewer, Jazmine Hughes, said that Leilani’s novel — about a young Black woman who moves in with her white lover, his wife and their adopted Black daughter — “reads like summer,” with “sentences like ice that crackle or melt into a languorous drip; plot suddenly, wildly flying forward like a bike down a hill.”

BESTIARY, by K-Ming Chang. (One World, 288 pp., $16.99.) This debut novel about three generations of Taiwanese women told through beasts — both real and mythical — “offers up a different kind of narrative,” Amil Niazi wrote in her review, “full of magic realism that reaches down your throat, grabs hold of your guts and forces a slow reckoning with what it means to be a foreigner, a native, a mother, a daughter — and all the things in between.”