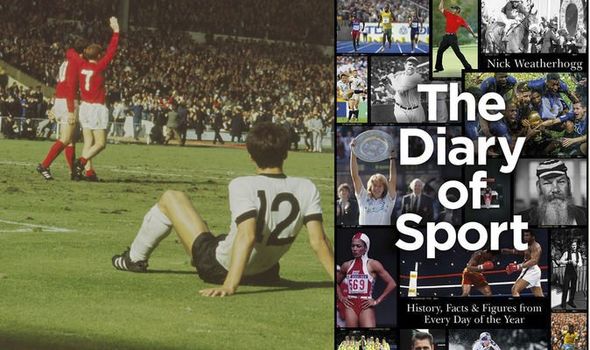 But nothing is certain. Perhaps the season will be voided, robbing Liverpool of their first title since they won the old First Division in 1990. So what can the sports fan do while waiting for the games to begin again?

Well, a great new book takes a look at hundreds of years of sporting history.

The Diary of Sport by Nick Weatherhogg (Pitch, £19.99) is a daily calendar of sports trivia beginning with the birth of every race horse (January 1) to Crystal Palace ending Manchester City’s run of 18 consecutive Premier League victories on December 31, 2017.

It covers almost every sport: a look at the entries for October 25-27 and you can read about snooker, Formula 1, football, horse racing, boxing, hockey, rugby league, IndyCar and basketball.

There are a mix of events, births and deaths and bizarre events like the woman’s football match at the London Olympics that was played in a different country!

I was a bit surprised that for the entry on 6 May 1954 when Roger Bannister ran the first sub-four minute mile, Weatherhogg did not include the fact that the timekeeper was that doyen of record keepers Norris McWhirter and he had practised announcing the result in his bath the previous night.

Still, plenty of good tuff makes it a must for any sports fans’ shelf to keep them entertained until the real thing gets underway again.