Every Black actor and actress, director and comedian stands on the shoulders of those who paved the way for future generations.

In honor of Black History Month, ET is celebrating some of the pioneers who made history in TV and film. 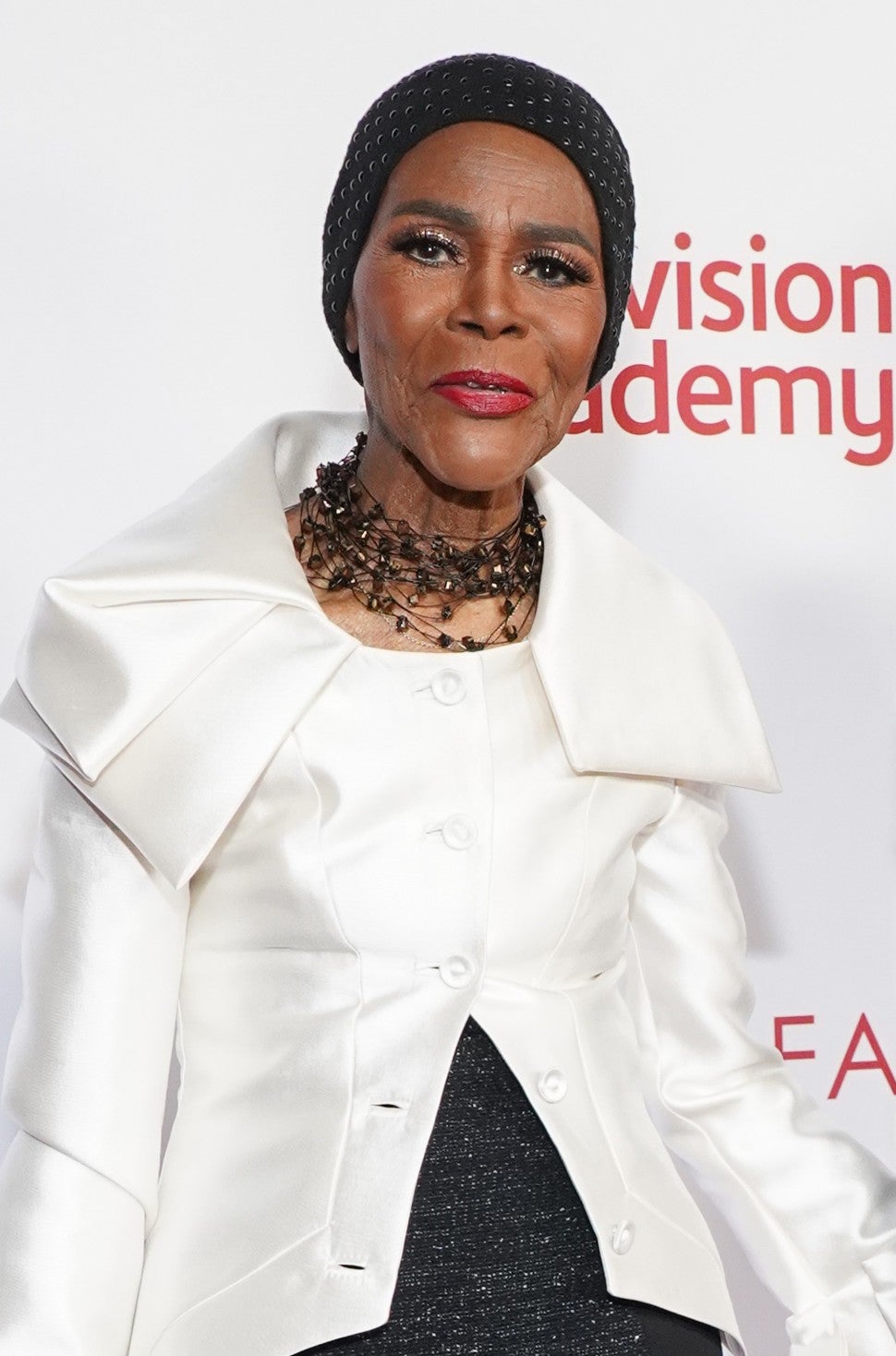 Cicely Tyson released Just As I Am: A Memoir just three days before her death on Jan. 28, 2021. The outpouring of love and praise for the legendary star was well warranted. The 2020 TV Hall of Fame inductee and Cherish the Day star captivated audiences with unforgettable roles in The Autobiography of Miss Jane Pittman, The Women of Brewster Place, Fried Green Tomatoes, How to Get Away With Murder and more. During the ’60s, Tyson became the first Black person to star in a primetime drama with her role in the series East Side/West Side, and the first Black actress on the soap opera Guiding Light.

In 2018, more than 40 years after her Oscar-nominated role in Sounder, Tyson became the first Black actress to receive an honorary Academy Award. 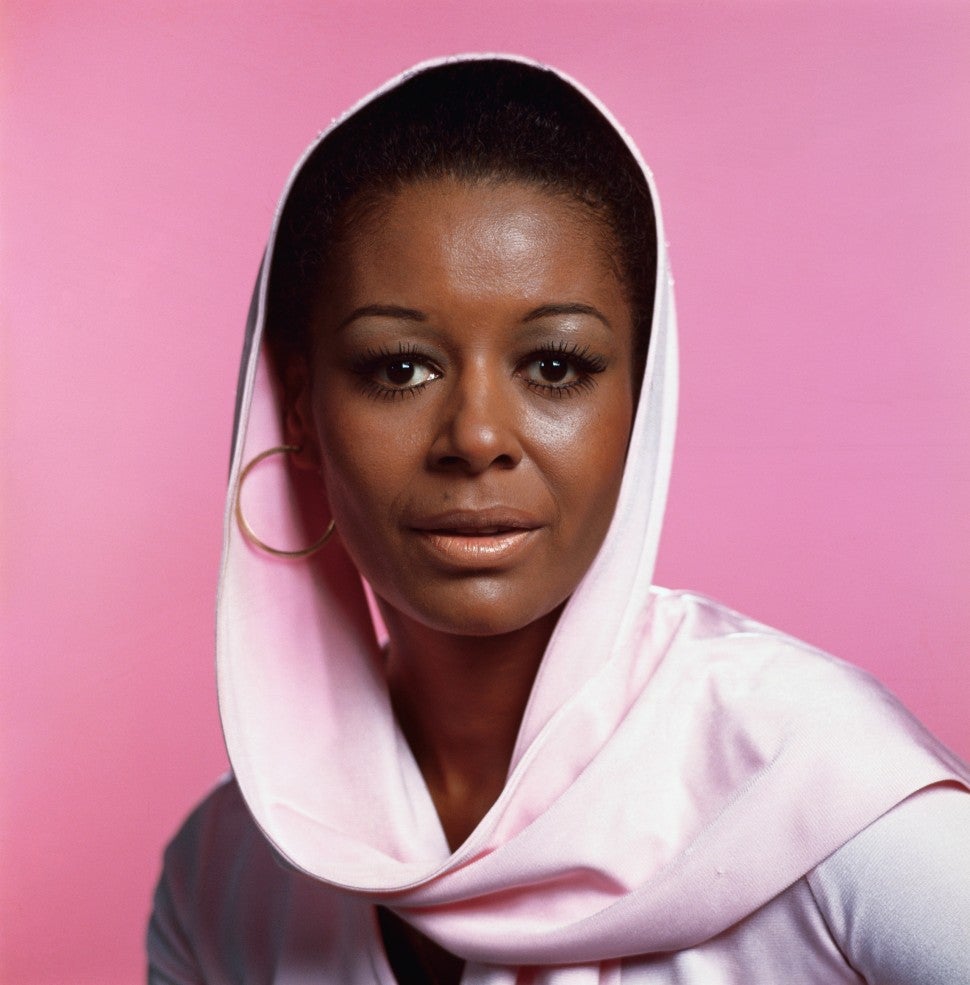 A former beauty queen from Orange, N.J., Fisher rose to fame playing secretary Peggy Fair on the ‘70s TV show Mannix. The role won Fisher two Golden Globes and an Emmy Award, making her the first black actress to be nominated in the supporting category and the first to win either award.

In 1962, Fisher became the first black actress to appear in a national TV commercial with speaking lines. Despite making history, Fisher’s acting roles slowed down after Mannix was canceled in 1975. She died in 2000 at the age of 65. 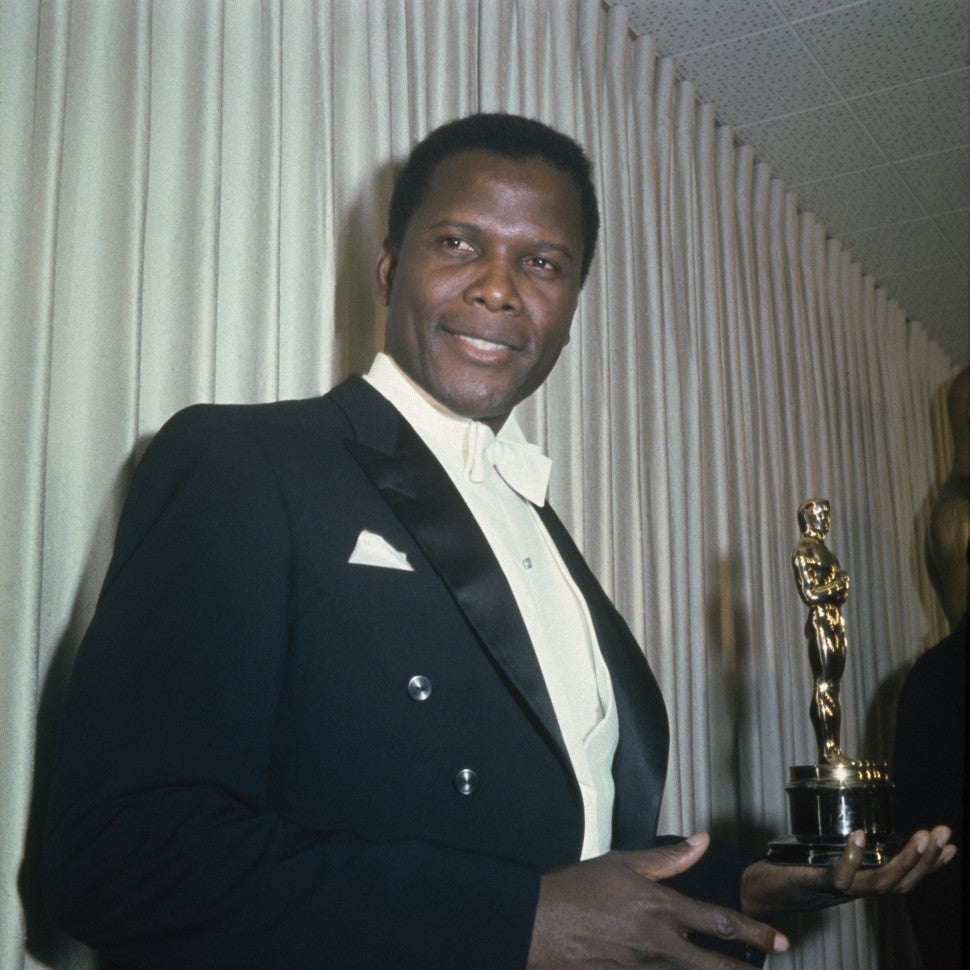 Long before he became a screen legend, Poitier launched his carer in the New York City theater, most famously appearing in the original Broadway production of Lorraine Hansberry’s A Raisin in the Sun. He landed his first major motion picture role in the 1950 drama No Way Out, where he played the lone black doctor in an all-white hospital.

In 1964, Poitier made history as the first black man to win a Best Actor Oscar for Lilies of the Field. 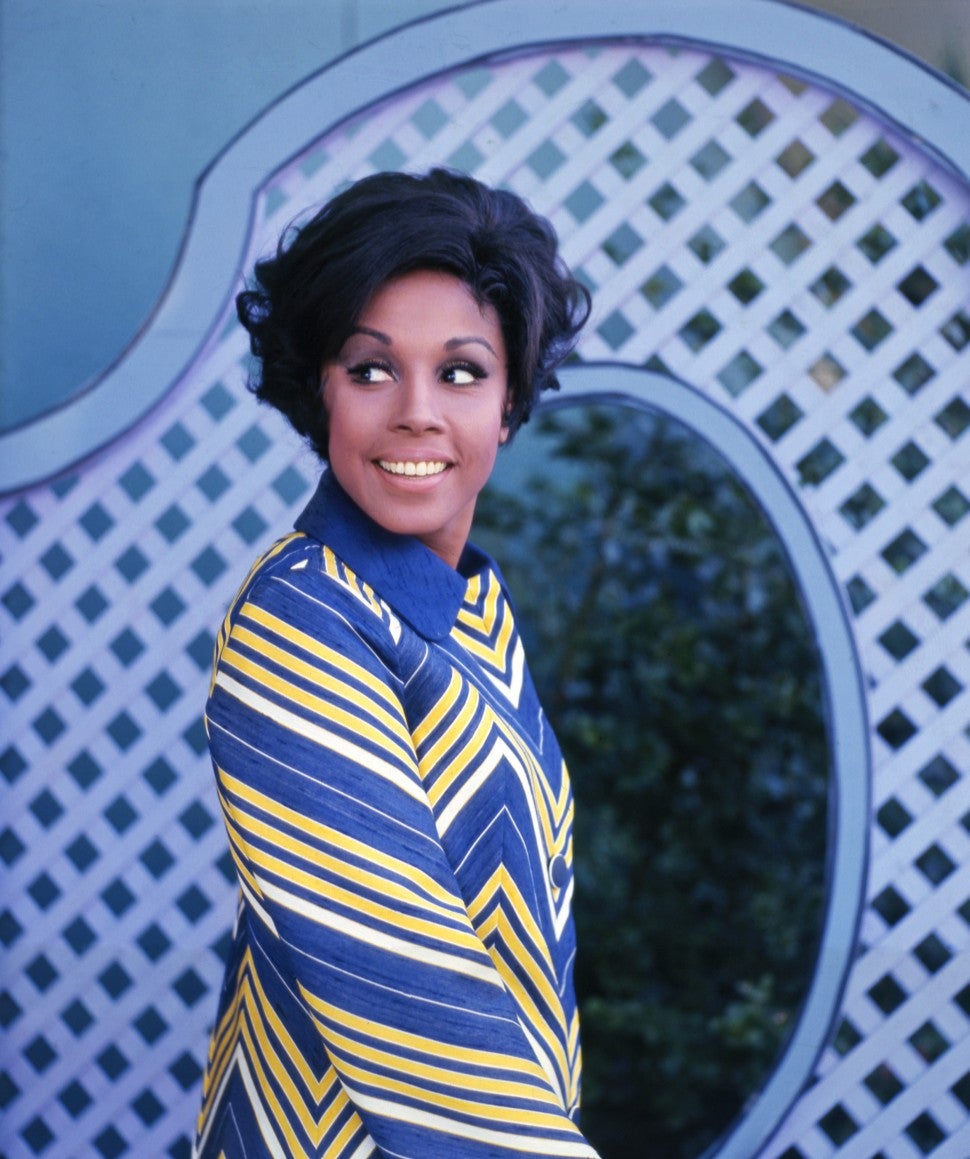 In 1968, Carroll made TV history on the series Julia as the first black actress to star on a non-stereotypical primetime TV role. Throughout her career, Carroll found success on both the silver screen and the small screen with Porgy and Bess, Claudine, Dynasty, The Five Heartbeats, The Love Boat, A Different Worldand more. 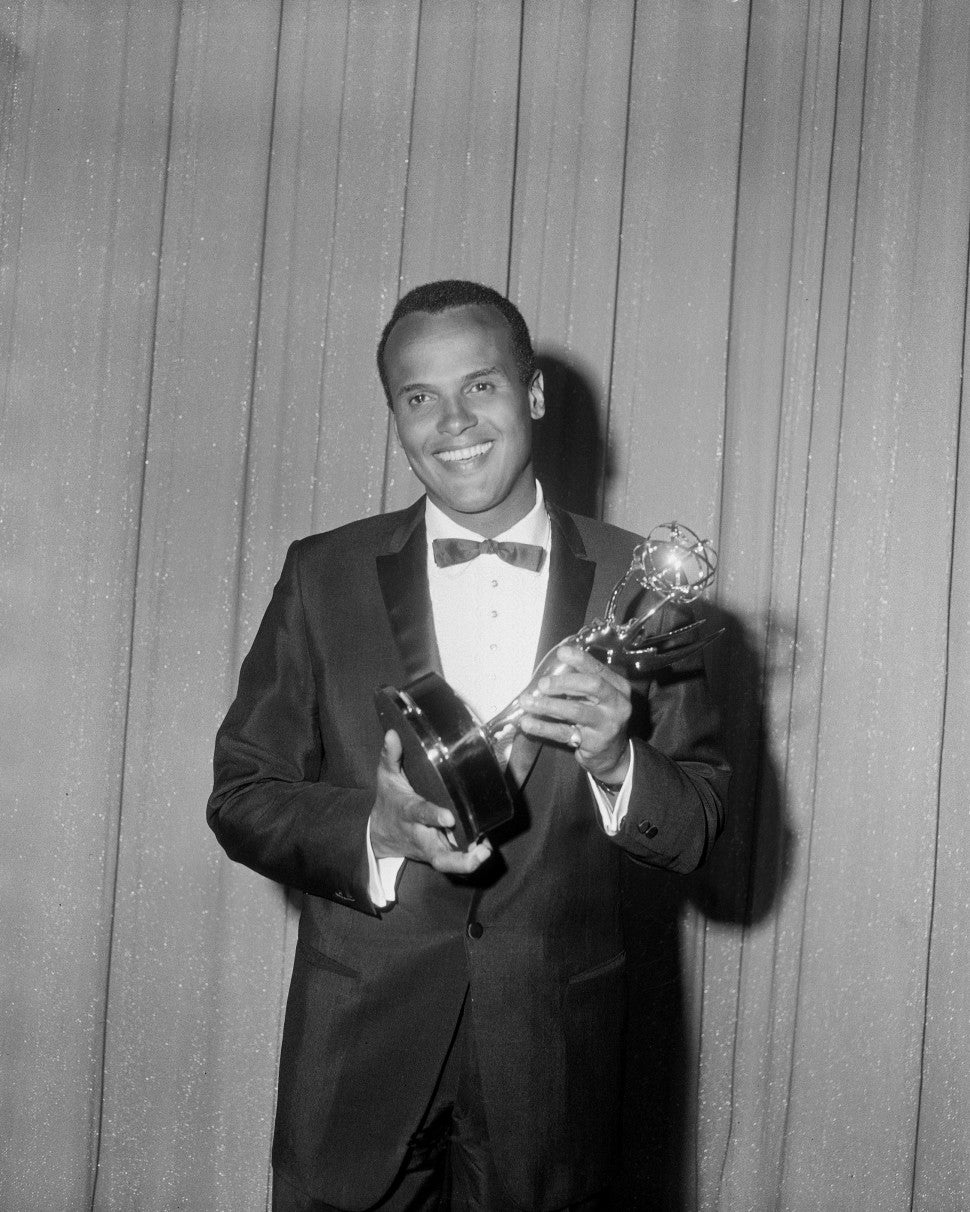 In 1960, the actor, Calypso singer and activist became the first black Emmy winner, which he earned for his TV special, Tonight With Belafonte.

Six years before making Emmy history, Belafonte became the first black male Tony Award winner. He also starred in film classics such as Carmen Jones, Island in the Sun and Uptown Saturday Night, landed a hit single with “The Banana Boat Song,” and released the first platinum-selling album by a solo artist. 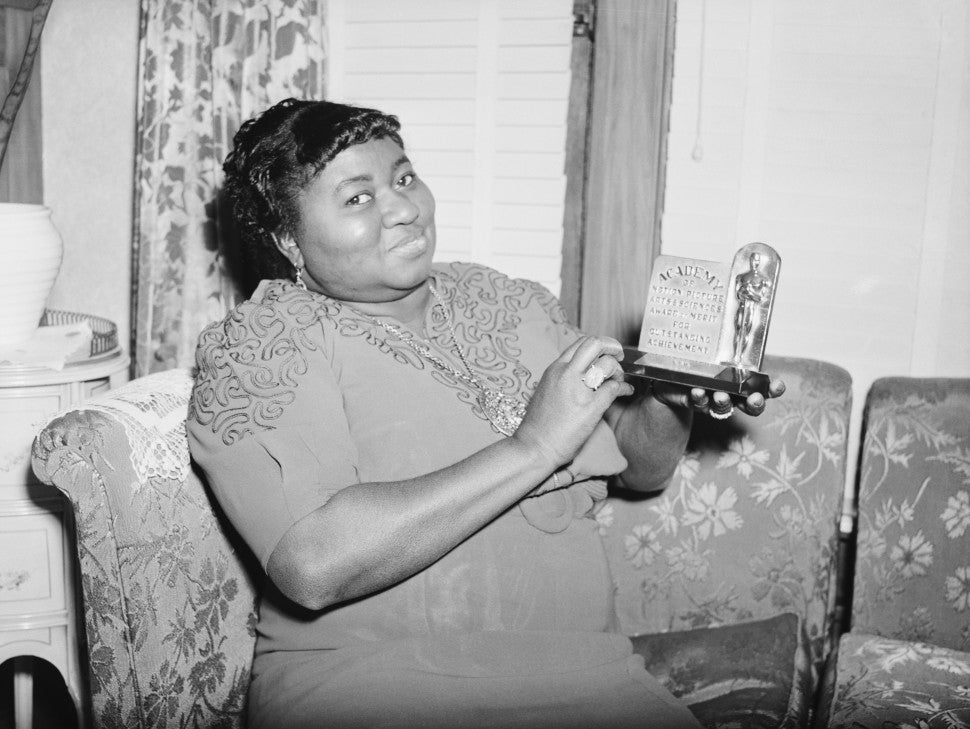 Hollywood’s first black Oscar winner’s story is one of triumph and tragedy. Aside from being criticized for her Oscar-winning role of  “Mammy” in Gone With the Wind, the film was boycotted over its racist and offensive stereotypes and dialogue, and McDaniel wasn’t even allowed at the Atlanta premiere because she was a black woman.

McDaniel was forced to sit in the back of the room inside the segregated venue at a small table away from her white cast members during the 12th annual Academy Awards, which were held inside the Ambassador Hotel’s Coconut Grove restaurant on Feb. 29, 1940. Nonetheless, McDaniel was elated to win an Oscar, which she called “one of the happiest moments” of her life.

After the Oscar win, McDaniel went back to playing maid characters before joining TheBeulah Show and replacing actress-singer Ethel Waters who quit the series, which was also criticized for depicting racial stereotypes (the character Beulah was originally played by a white man).

In 1951, McDaniel suffered a heart attack while filming an episode of the show and was diagnosed with breast cancer that summer. She died the following year at age 59. 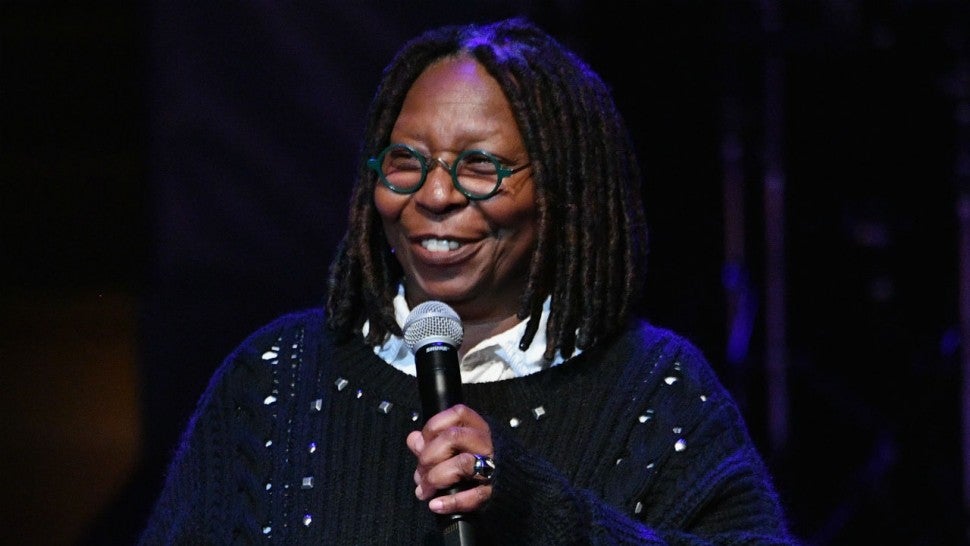 These days, Goldberg is known as the moderator on The View, but the actress and comedian is a pioneer in her own right. In 2000, Goldberg won a Tony Award for Thoroughly Modern Millie and became the first black EGOT (Emmy, Grammy, Oscar and Tony) recipient.

Fifty years after McDaniel’s Academy Award win, Goldberg became the second black woman to win the Best Supporting Actress Oscar (for 1990’s Ghost), and the first black actress to be nominated in both the Supporting and Best Actress categories.

Goldberg also won a Daytime Emmy for Beyond the Tara: The Extraordinary Life of Hattie McDaniel, and a Grammy for her 1986 comedy album. 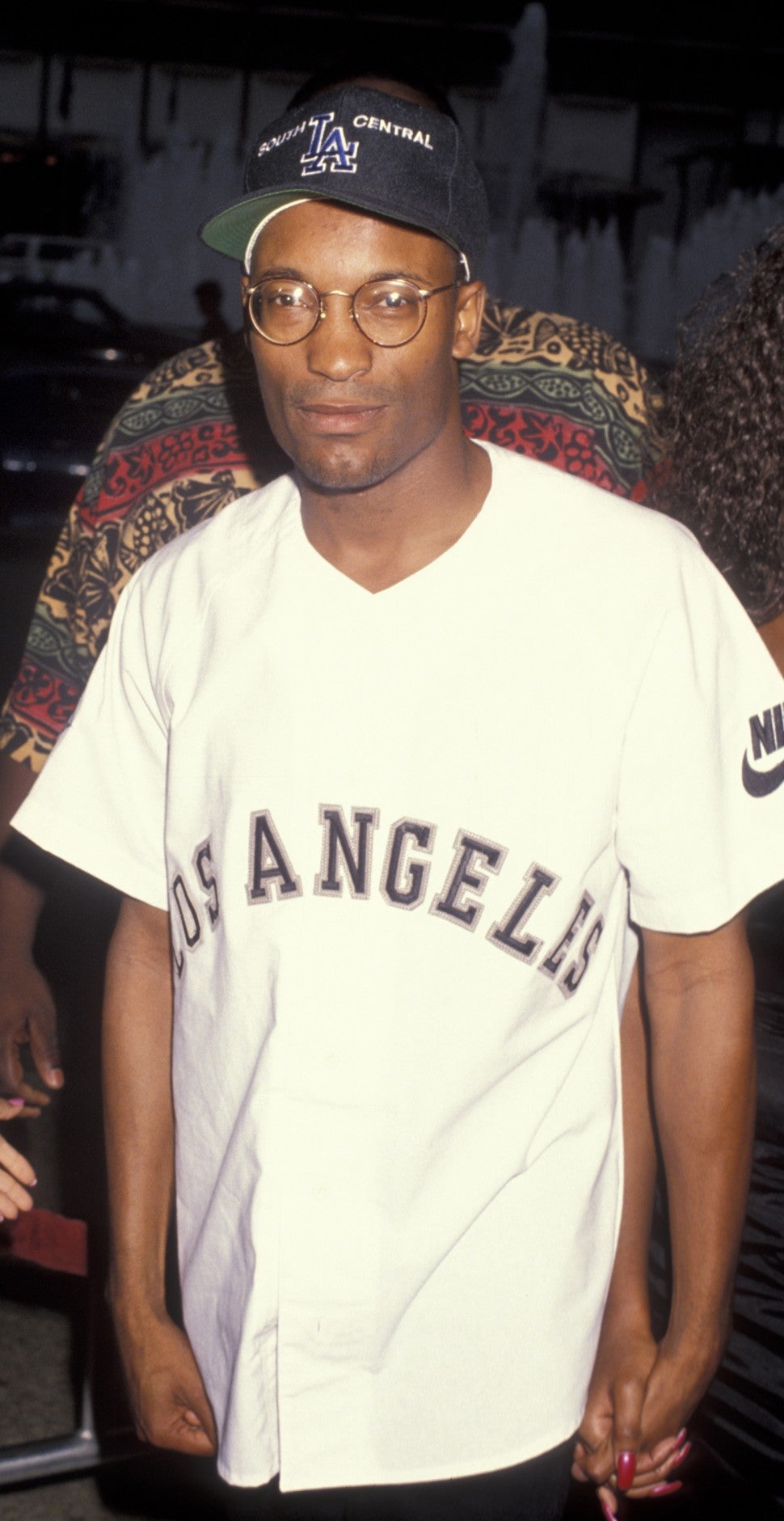 Boyz n the Hood put Singleton on the map and in the history books. The South Los Angeles native was fresh out of USC film school when he made his feature film directorial debut with a cast of mostly newcomers who went on to achieve major success in Hollywood including future Oscar winners Cuba Gooding Jr. and Regina King as well as Ice Cube, Morris Chestnut and Nia Long.

The film was groundbreaking in offering a lens into the lives of black teenagers in South Central L.A. in the early ’90s. On Feb. 20, 1992, Singleton was nominated for Best Original Screenplay and Best Director Oscars, making him the first black director (and the youngest person) to be nominated in the latter category. He went on to helm other culturally relevant projects such as Poetic Justice, Higher Learning, Baby Boy, and the FX TV series Snowfall. 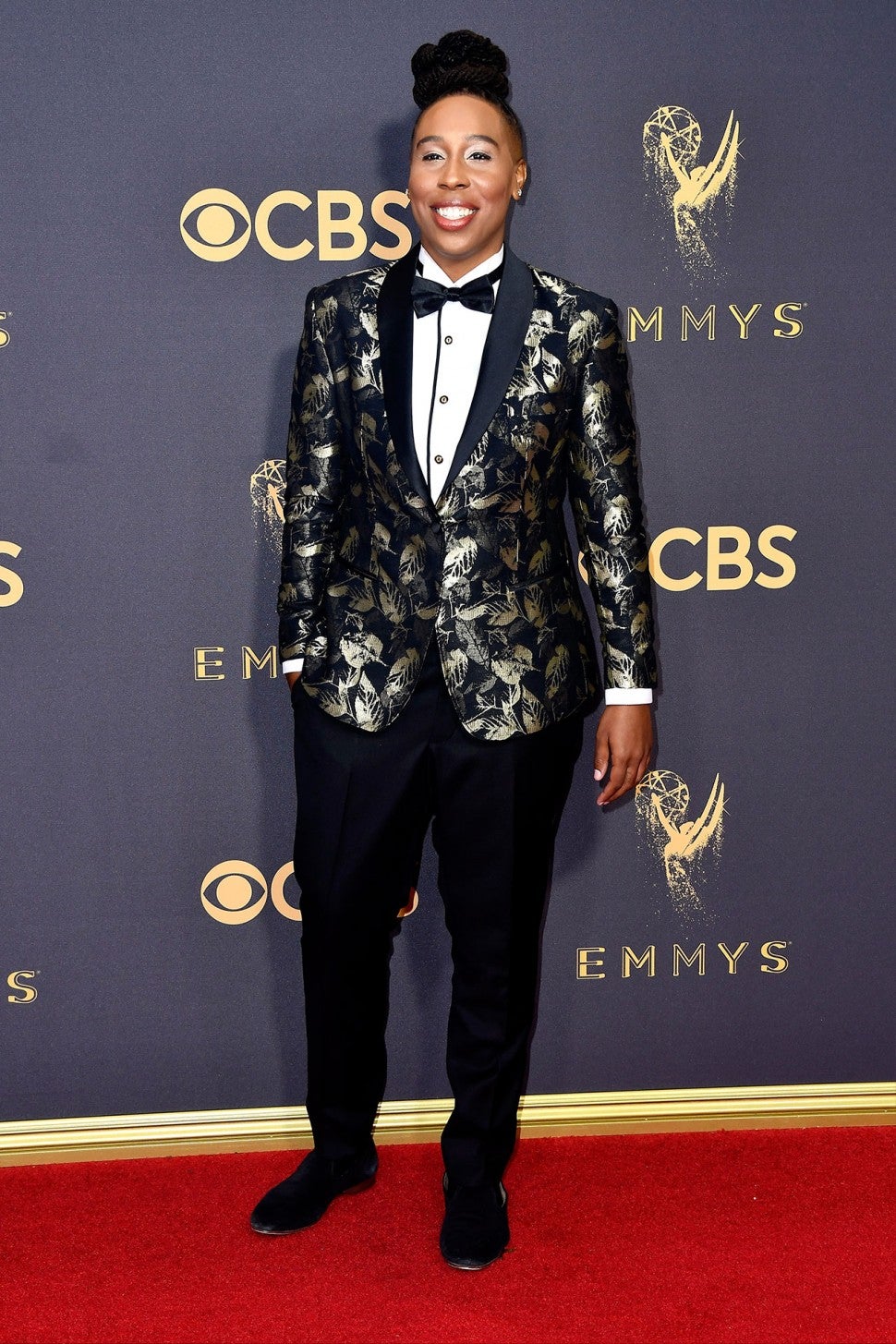 In 2017, Waithe became the first black woman to win an Emmy award for Outstanding Writing for a Comedy Series for the infamous “Thanksgiving” episode of Aziz Ansari’s Netflix series, Master of None. In the episode, Waithe details coming out as a lesbian to her family and friends. The award also marked a historic win for the LGBTQIA community as Waithe became the first black gay woman to win in that category.

“My LGBTQIA family, I see each and every one of you,” Waithe said during her acceptance speech. “The thing that make us different, those are our superpowers. Every day, when you walk out that door, put on your imaginary cape and go out there and conquer the world because the world would not be as beautiful as it is if we weren’t in it.” 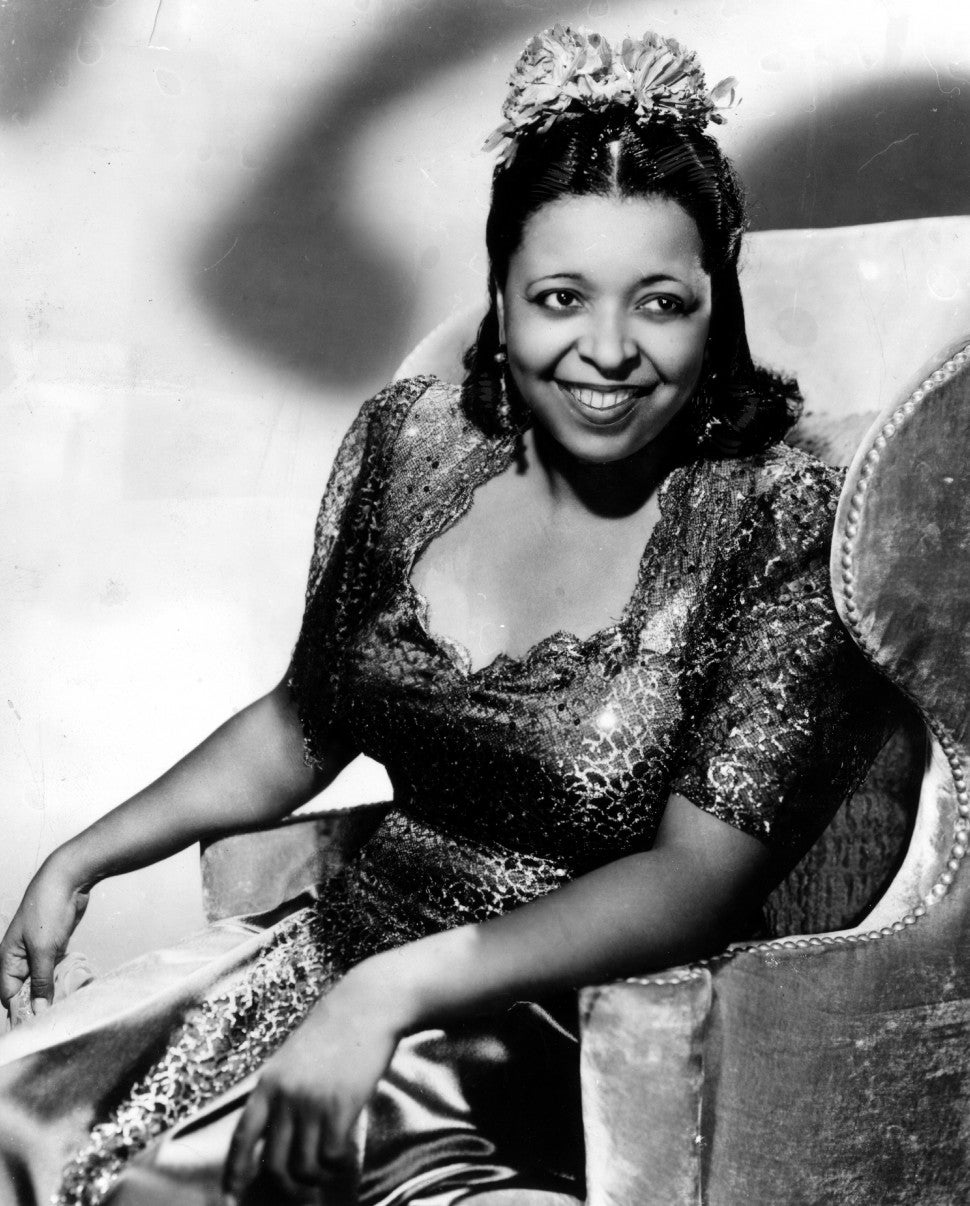 In 1949, Waters became the second black person to be nominated for an Oscar. Later in her career, Waters appeared on the variety show The Hollywood Palace and the TV series Daniel Boone before earning her final acting credit in 1972 for Owen Marshall, Counselor at Law.

Waters died from uterine cancer and kidney failure in 1977. She was 80 years old. 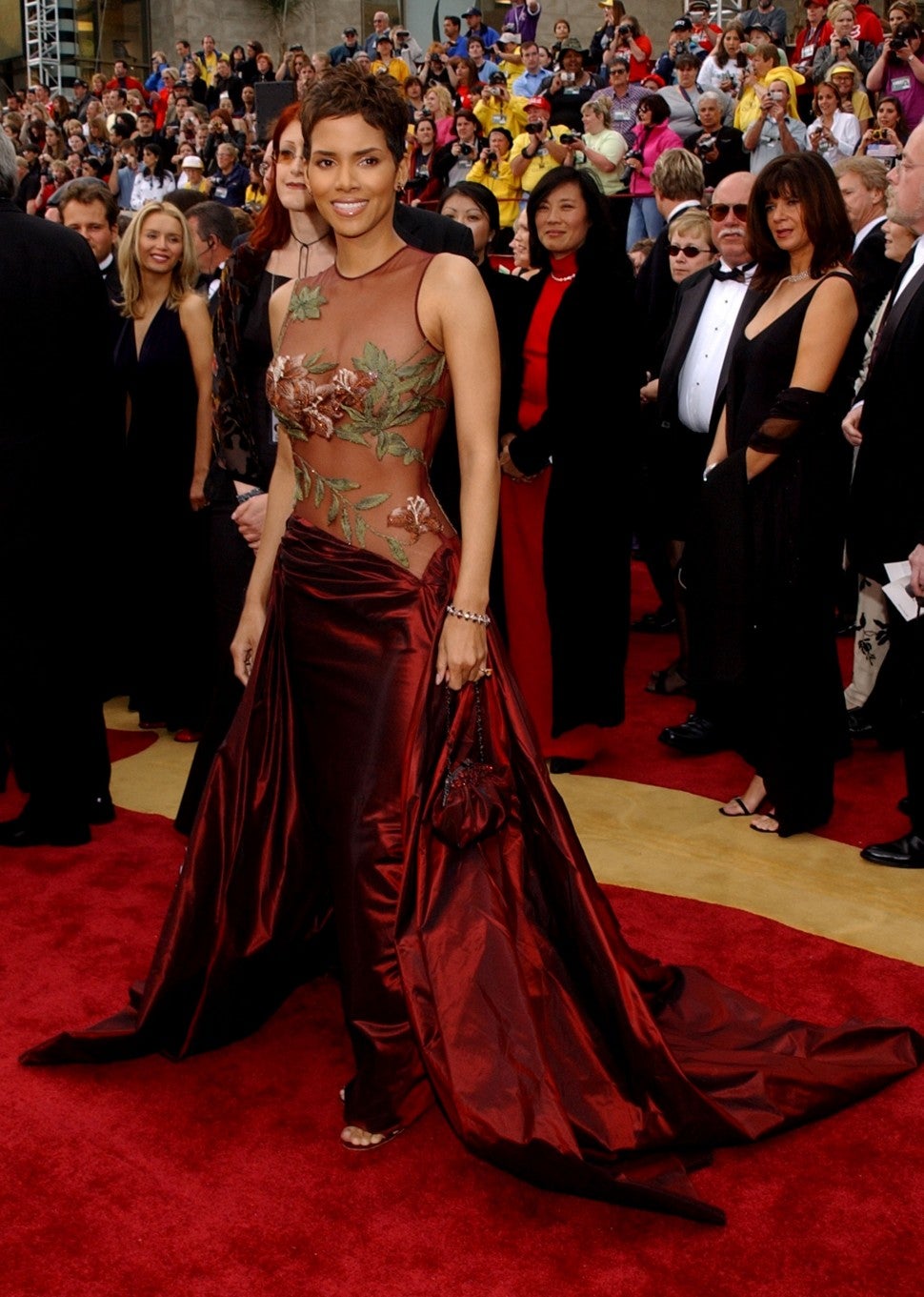 In 2002, Berry became the first black woman to win an Oscar for Best Actress.

Berry, who remains the first and only black actress to take home an Oscar in the leading category, spoke about the lack of diversity in 2017. “It’s troubling to say the least,” she told former Teen Vogue editor in chief Elaine Welteroth. 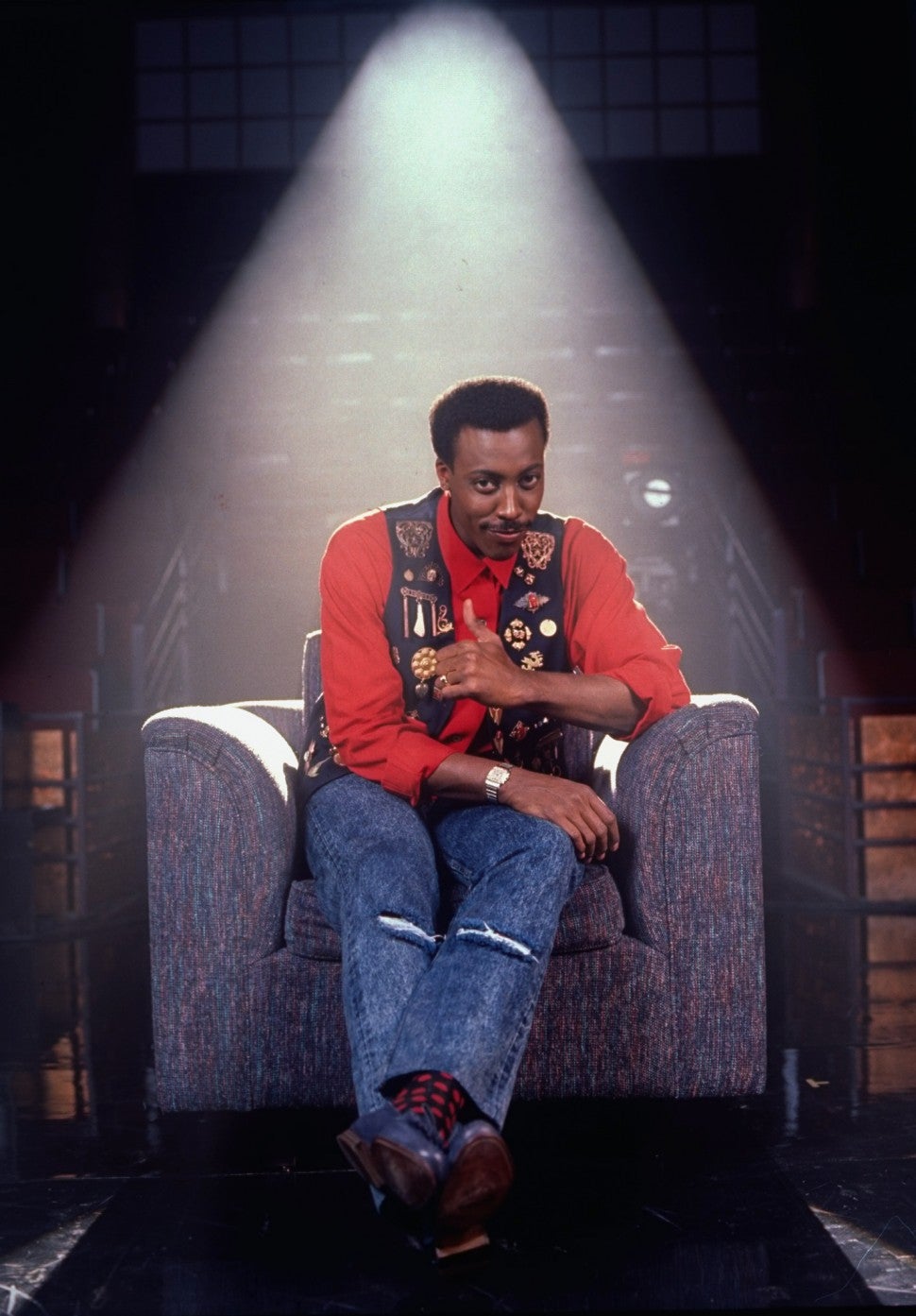 The Coming to America star returned to the late-night arena in 2013, but his show was canceled after one season.