CHRISTOPHER STEVENS: Nurse Trixie’s masterclass in how to glare daggers while in a mask

Oh, Mr Scarisbrick. Charm is all very well, but what the modern young woman expects is moral substance. And yours is looking slightly soggy.

The suavely suited director of the Lady Emily Clinic in fashionable Mayfair was ladling compliments over Nurse Trixie (Helen George) as Call The Midwife (BBC1) continued its foray into the refined world of Up West.

‘Another very soignee ensemble,’ he purred at the sight of Trixie, who marched into his office in a woollen teal jacket with a choirboy collar and buttons as big as side plates.

As a devotee of The Great British Sewing Bee, these days I can’t help noticing such things. 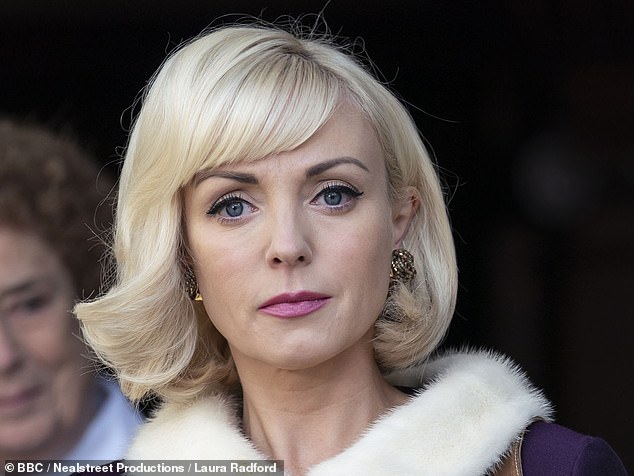 The suavely suited director of the Lady Emily Clinic in fashionable Mayfair was ladling compliments over Nurse Trixie (Helen George, pictured) as Call The Midwife (BBC1) continued its foray into the refined world of Up West

Either Trixie is a dab hand with a sewing machine or the monthly allowance her godmother sends is being coaxed to go a long way.

In earlier series, such wolfish praise would have turned Trixie’s head. But it’s 1966 now, and she is a strong, independent female. It takes more than a matching silk tie and handkerchief to bowl her over.

Also, as she remarked to her friends at Nonnatus House, Mr Scarisbrick (Richard Dillane) ‘is very definitely the wrong side of middle-aged’. In 1966, any chap over 40 might as well be mummified.

Trixie was determined to test her suspicions that the Lady Emily’s maternity rooms provided cover for a lucrative sideline in abortions, which were illegal at that time. 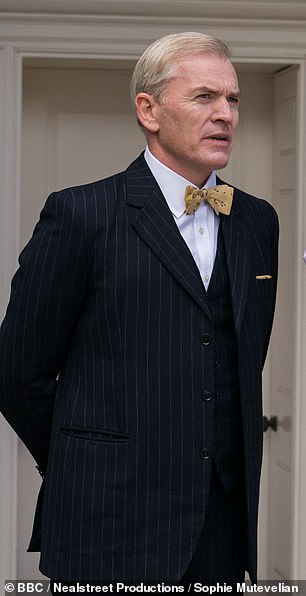 Also, as she remarked to her friends at Nonnatus House, Mr Scarisbrick (Richard Dillane) ‘is very definitely the wrong side of middle-aged’. In 1966, any chap over 40 might as well be mummified

In gown and mask, she hovered beside the operating table as a termination was carried out. Only her eyes were visible but, thanks to Covid restrictions, we’ve all become adept at reading the mood of people in masks — and Trixie was glaring daggers.

‘What you are doing is criminal,’ she fumed. Goodbye, Mr Scarisbrick, and goodbye to Call The Midwife’s dalliance with the stylish world beyond Piccadilly. ‘We will never speak of it again,’ vowed Sister Julienne (Jenny Agutter).

Fortunately, Nurse T in her powder pink uniform did catch the eye of a wealthy and recently widowed father (Olly Rix) so perhaps the ‘soignee ensemble’ will get another outing.

Writer Jonathan Harvey had a perilous line to tread — the show could hardly imply that abortion ought to be a criminal offence.

Equally, there could be no suggestion that the nuns would ever approve of it. Cleverly, the script emphasised the injustice of back-street abortions for the poor at one end of the city, while wealthy women were paying for discreet and safe procedures across town.

Meanwhile, Sister Frances (Ella Bruccoleri) was indulging her craving for women’s magazines, and what The Beatles had for Christmas. She’ll be wearing powder pink and teal next.

As well as an eye for ladies’ fashions and a talent for reading facial expressions behind masks, something else many people have been discovering this year is the range of minor channels available gratis via the Freeview box.

In addition to documentary stations such as Smithsonian and PBS America, Together TV might be worth seeking out, on Freeview 82.

Most of its schedule consists of repeats of feelgood shows such as Garden Rescue and Hairy Bikers.

But there are also original gems, and Our Big MS Adventure (Together TV) deserved a wide audience. Filmed over 12 years, it charted the search for an effective multiple sclerosis treatment.

It also paid tribute to the unstoppable courage of former Saatchi ad-man Al Fraser, who despite his grave illness was intent on trekking to Iona, in the Hebrides, to see old friends.

A great deal was packed into this one-off, which needed to be longer. But for anyone coping with this cruel disease, it was a film packed with hope.

Downpour of the weekend: As the heavens opened on Antiques Roadshow (BBC1), cagoules came out and awnings were hastily unfurled at Bodnant Garden in North Wales. Still, social distancing is easier when everyone is carrying 4ft umbrellas.