CHRISTOPHER STEVENS reviews last night’s TV: Anyone for a slice of soggy ginger sponge with a rich, bitter topping?

The Great Celebrity Bake Off For Stand Up To Cancer

How Channel 4 must long to get one of the Royal Family onto Bake Off.

It could happen — the notion of Kate or Camilla wielding pastry cutters for charity, or William wrestling with a food processor, is not beyond the realms of imagination.

But how would they tackle the showstopper on The Great Celebrity Bake Off (C4)? This time, presenter Matt Lucas declared, it was ‘a 3D cake representing your biggest bugbear, the thing that irritates you the most’.

My guess is it would involve a soggy ginger cake sprinkled with something rich and bitter, baked into a soapy opera gateaux. 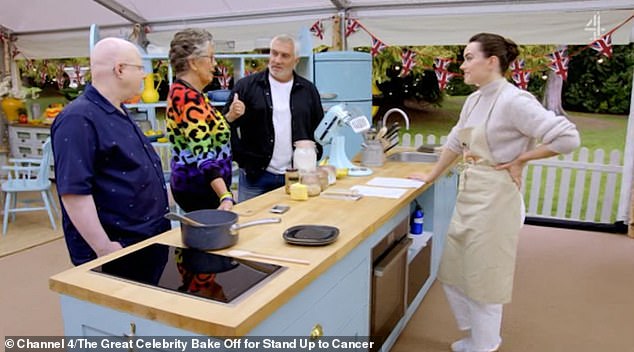 Star Wars actress Daisy Ridley didn’t care how big a mess she made. Her showstopper was a broken toilet, possibly the most unappetising cake ever presented to the judges

Prue Leith, one of the judges in this Stand Up To Cancer special, claimed nothing annoyed her more than the way her husband left shoes strewn all over the house. Or perhaps she said ‘choux’ — that really would be provoking.

Comedian Rob Beckett fashioned a motorway diversion sign out of sponge, handling the yellow icing so deftly that it looked as though he’d practised it a dozen times.

Rob was having a good show: he streaked away at the start, moulding millionaire’s shortbread into faux Ferrero Rochers that wouldn’t disgrace a contestant on the real Bake Off. His chocolate hazelnut balls earned him a handshake from Paul Hollywood.

The hard work on that recipe was done by his wife, Rob confessed. So was his lockdown haircut by the look of it — with a pudding bowl.

He tackled every bake like a cowboy builder on a rush job. Squishing chocolate ganache paste into a burger between his hands, he grunted approvingly: ‘I could do grouting with that.’

On the next kitchen counter, fellow comic Tom Allen was relishing the campness of it all. ‘Let’s see if my gay-nache is thickening,’ he trilled. Tom presents Bake Off: The Professionals, the sister series featuring restaurant patisserie chefs — and he wasn’t going to let Paul forget it. His show was for pros, not amateurs, he mocked.

Half the entertainment in these celeb specials is working out which of the contestants is taking it seriously. Singer Alexandra Burke certainly was — not out of sheer competitive instinct, like Rob, but because she is obviously a good cook.

Star Wars actress Daisy Ridley didn’t care how big a mess she made. Her showstopper was a broken toilet, possibly the most unappetising cake ever presented to the judges. She was a good sport, though, when Matt turned starstruck: ‘What was it like, actually being in that episode of Casualty in 2013?’ 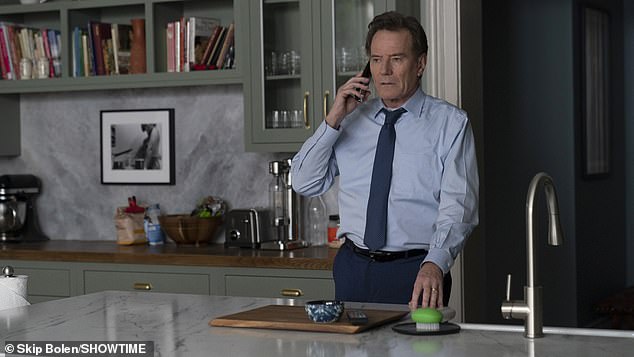 He’s making his first return to TV in a leading role since that series ended eight years ago, this time playing a New Orleans judge driven to crime to protect his teenage son from the mob, in Your Honor (Sky Atlantic)

‘I get asked this all the time,’ she groaned.

Despite a 40-year TV career, Bryan Cranston will always be associated with his seismic performance as drug baron Walter White in Breaking Bad.

He’s making his first return to TV in a leading role since that series ended eight years ago, this time playing a New Orleans judge driven to crime to protect his teenage son from the mob, in Your Honor (Sky Atlantic). It’s a bleak and gritty story, shot in muted colours with lots of grey and faded greens. Don’t even think of searching it out if you feel queasy at the sight of blood: the first episode opens with a graphically sickening hit-and-run killing that feels endless.

The structure of the plot is strangely repetitive.

If you’re a Cranston fan, none of that matters. He’s compelling to watch, an actor who looks like Everyman possessed by demons.