“Dancing with the Stars” welcomed Cheryl Burke and Cody Rigsby back to the live stage on Monday after the duo previously had to perform from home due to positive coronavirus tests.

The dancing professional, 37, and Peloton instructor, 34, took the stage for the first time since announcing they’d been diagnosed with COVID-19. They were back and healthy again just in time to be part of the two-night “Disney Heroes” event where they accomplished a spectacular performance to “Stand Out” from “A Goofy Movie.”

Host Tyra Banks immediately addressed the elephant in the room, asking if they were feeling pressure being back on the stage after battling the coronavirus.

“No, I feel great! I’m so glad to be done with quarantine, I’m glad to be back in this space,” Rigsby declared (via People).

He added that he was “obsessed” with his partner, Burke, and happy to be by her side in person again.

The duo ultimately went on to score a 27 out of 40 for their dance and will have another crack at the world of Disney on Tuesday’s episode.

Burke was the first to inform followers that she had tested positive for COVID-19 after experiencing some mild symptoms. A few days later, Rigsby too announced that he had tested positive. That week, they were judged on a pre-filmed rehearsal of their performance. The following week, they competed from home in a less-than-ideal scenario.

“I just want to let everyone know that my partner and I have COVID, which I feel still so bad about, and obviously, I’m just so happy that we are both feeling good,” Burke shared on social media ahead of the performance. “We are still going to dance on Monday, but we’re going to do it remote and from the comfort of our own home.” 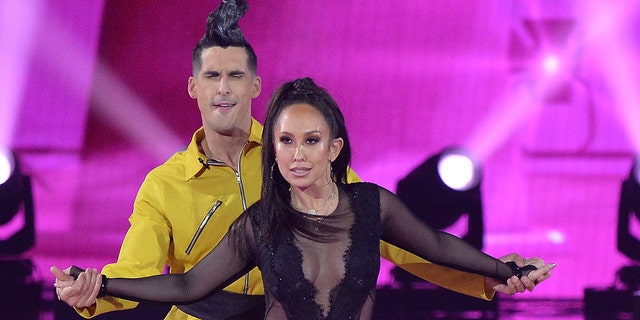 Cheryl Burke and Cody Rigsby returned to ‘Dancing with the Stars’ Season 30 for ‘Disney Heroes’ night after sitting out the prior week due to positive coronavirus tests.
(ABC/Eric McCandless)

The two eventually were able to reunite after their respective quarantines on Saturday for a rehearsal of their Disney performances. Two days prior, she announced that she had ended her quarantine and was just waiting for Rigsby to finish up his — both seemed to be feeling better by then, though.

“I have been officially cleared. I am back to normal. No more quarantine for me,” she said on Instagram. “Unfortunately, Cody is still in quarantine, but he will be back in Los Angeles starting Friday, which means we can technically dance on both Monday and Tuesday.”

She added: “I’m grateful that we’re healthy. Thank you guys for all your support over the past week-and-a-half or ten days. It’s been truly an emotional rollercoaster, but wouldn’t have been able to get through it without all of you guys and all of your support. I am just happy that Cody is okay, and we’re still rehearsing via Zoom as we speak.”