Heather Rae Young and Tarek El Moussa haven’t exactly made a secret of their romance since they first started dating in 2019. The “Selling Sunset” real estate agent and the “Flip or Flop” house flipper have often gushed over one another on social media and in interviews, and now Heather is dropping a bombshell about potentially having kids with her husband-to-be.

Heather — who doesn’t have any biological children of her own — already has a close relationship with Tarek’s children, who shares with his ex-wife, Christina Haack. The former couple share daughter, Taylor, who was born in 2010, and son, Brayden, who they welcomed in 2015.

Despite the couple not yet tying the knot in the wake of their July 2020 engagement, Heather has already formed a close bond with Tarek’s kids. The latter even gushed about how great his wife-to-be is with his children on Mother’s Day in May. “Heather, I couldn’t have asked for a better woman to be Tay and Bray’s bonus mom… from the very beginning you have always put them and their needs first and seeing your guys’ bond grow stronger and stronger over the years makes me the happiest man alive,” he captioned an Instagram upload. “I love you and I love our family.”

Christina also appears to approve of the Heather’s relationship with her children, as the two even swapped bouquets to celebrate Mother’s Day.

But what’s Heather saying now about expanding her family with Tarek? Read on for more. 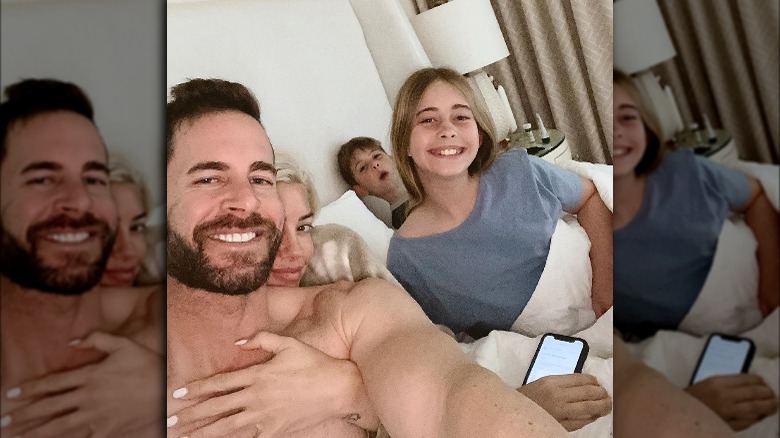 It sounds like it may just be the two children for Tarek El Moussa. Heather Rae Young spoke openly about their plans for kids during an appearance on E!’s “Daily Pop,” where she confessed they’re not thinking of expanding their family right now.

“I already feel like I have two kids,” Heather admitted (via People). “I’m raising Tarek’s babies, and we have them 50 percent of the time. I am such a good bonus mommy. I adore those kids. I raise them like they’re mine.”

“Right now, our household is freakin’ crazy. I’m filming TV shows, I’m raising kids, I’m building businesses. So right now, no,” she continued, though it sounded like she wasn’t totally ruling out the possibility of welcoming a baby with Tarek somewhere down the line.

Following her appearance on the show though, Heather took to Instagram to reveal that whether or not she and Tarek will have children together is the “number one question [she gets] asked.” She added, “I never knew how much love I had to give until I came into these babies lives and as of now I can’t see myself wanting to add another into the family.”

Heather also wrote that their blended family “is special” and noted that Tarek and Christina’s children make her “heart… so full” that she doesn’t have a desire to give birth to her own biological children.