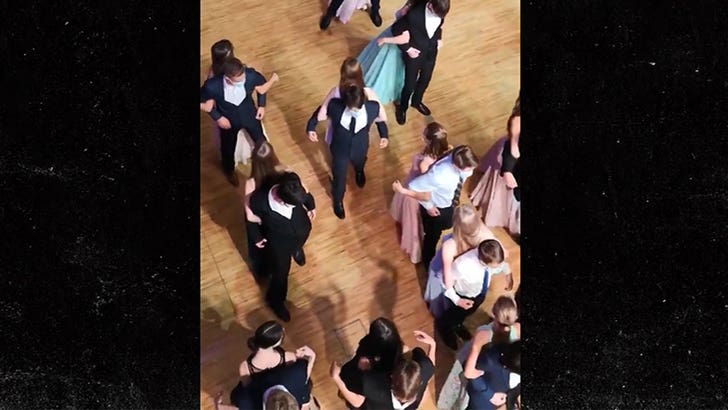 Forget leaving room for Jesus at your school dances — apparently, in Europe, they’re turning spacing rules for young couples on their head for COVID … or on their back, rather.

Check out this video of what’s been described as a high school prom in what many are saying must be the Czech Republic (because of the language the MC is using). As you can see, kids are definitely back on campus, and they’re even hosting traditional events again.

Thing is, there’s nothing traditional about how the students are busting a move — especially for the slow dance section. They’re all back-to-back, locking arms … and wearing masks. How romantic!!!

Unclear which school this is exactly, but we’ll say this … kudos for creativity, ’cause there’s a vast number of ways officials could’ve rolled out the new dance regulations, and a lot of them probably would’ve been more restrictive than this. At least here, there’s still contact.

Assuming anything like this becomes adopted in the States if/when schools widely open again … we suppose the chaperones won’t have to walk around with rulers anymore 🤷🏽‍♂️.

Matthew McConaughey Was Blackmailed Into Losing His Virginity At 15 – & More SHOCKING Memoir Revelations!
We and our partners use cookies on this site to improve our service, perform analytics, personalize advertising, measure advertising performance, and remember website preferences.Ok