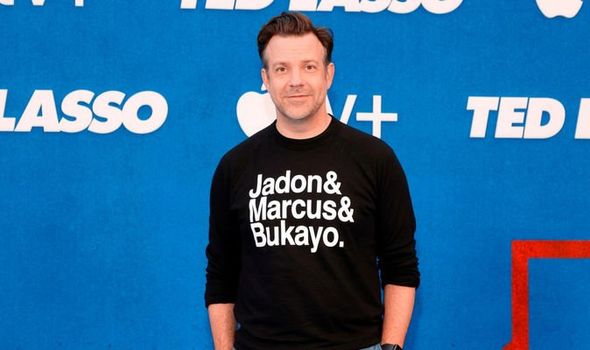 At the season two premiere for Jason Sudeikis’ football comedy Ted Lasso, the actor took the opportunity to show his support for Marcus Rashford, Jadon Sancho and Buyako Saka after they suffered racist abuse following England’s defeat in the Euro 2020 final.

The actor’s shirt has been met with warm praise on social media. NBC journalist Roger Bennett said: “Huge love for Jason Sudeikis’ sweatshirt at tonight’s Ted Lasso season two premiere. Shows that like his character, he truly understands that football in his heart, is all about human goodness.”

One man said: “Jason Sudeikis at the Ted Lasso premiere. A class act…Such a classy thing to do.”

Another said: “Oh my god I love him. So much.” And, a third added: “So much respect for you Jason Sudeikis. Can’t wait for season two.”

In Ted Lasso, Sudeikis plays Lasso, a small-time American college football coach who is hired to coach an English Premier League soccer team despite having no experience of the game.

The show proved to be a breakout hit last year and won a Golden Globe and a Screen Actors Guild Award. Now it has been nominated for 20 Emmy awards, including one for outstanding comedy series.

A mural of Rashford in Manchester was also defaced with insults following Sunday’s game.

The rest of the England team has spoken out against the abuse, with captain Harry Kane saying: “They deserve support and backing, not the vile racist abuse they’ve had since last night. If you abuse anyone on social media you’re not an England fan and we don’t want you.”

Season two of Ted Lasso will debut on Apple TV+ on July 23.